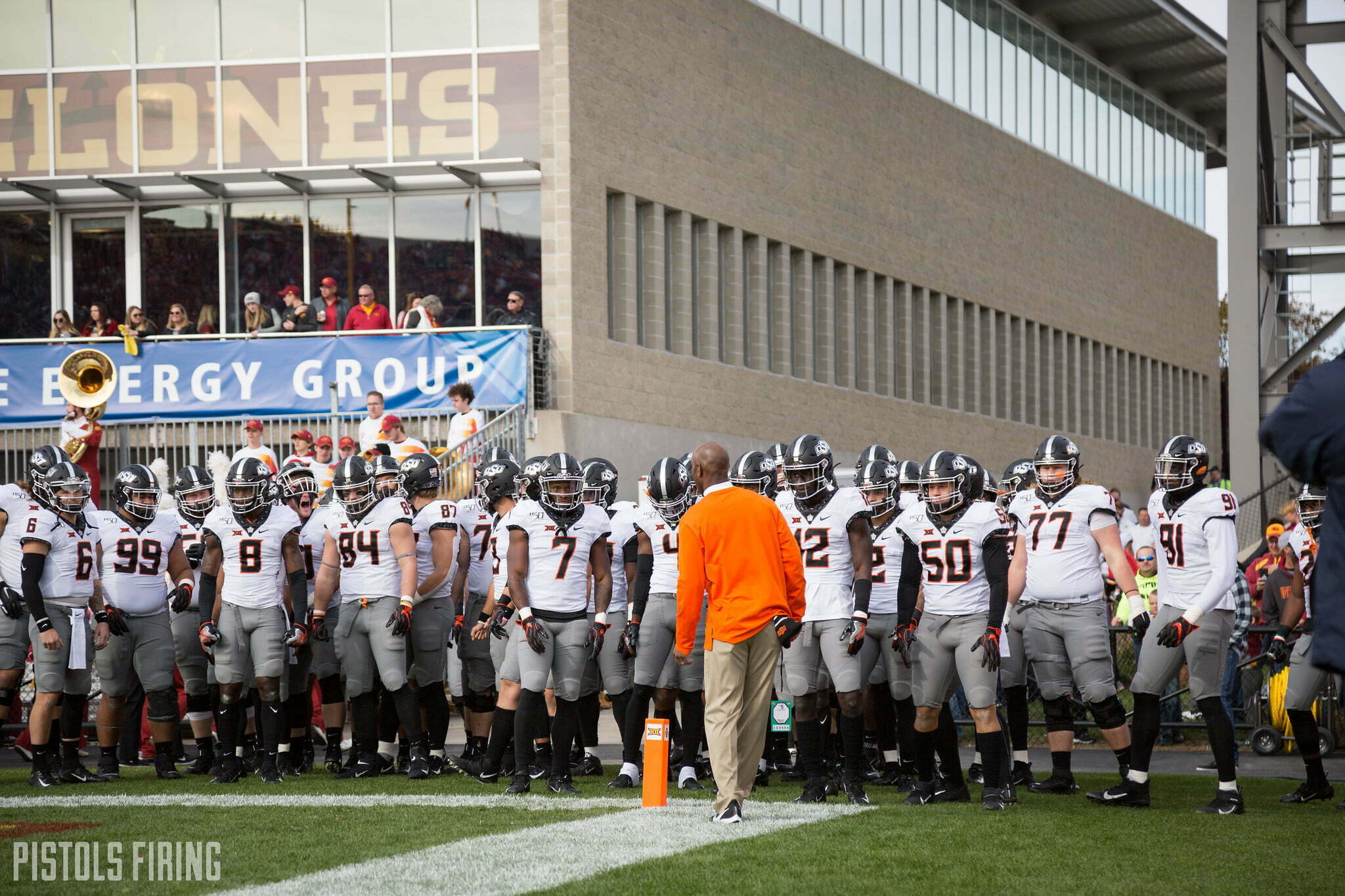 If the plan is for Oklahoma State and Oregon State to clash on Thursday, Sept. 3 (and as of right now, it is), then the next 10 days of decision-making have become pretty important.

On April 17, the Big 12 Conference suspended team activity and meetings for all of its universities through May 31. That date has not been extended, which means that we’re under two weeks from that ban being lifted. If it is in fact lifted on May 31 and teams are allowed to reconvene, then it becomes a matter of what each individual university is comfortable with in terms of getting players back on campus and opening up the college sports world.

There are a lot of moving parts when it comes to college athletics — and when we talk about college athletics, we’re really talking about football — but the two biggest ones that matter right now are the Big 12 as a conference and Oklahoma State as a university. The Big 12 lifting its current ban would be a step forward toward that OSU-OSU game in September, but not the only step needed. And it might not even happen.

“[A return] could be earlier in June, it could be mid-June, it could be late June or early July,” Big 12 commissioner Bob Bowlsby told the Dallas Morning News. “We have some work to do to come up with a recommendation for our CEOs as well. We’re still in midstream. We have to get back by sometime around the middle of July, because otherwise we’ll have to push the season back.”

Robert Allen reported this week that OSU, TCU and West Virginia were the loudest voices in favor of returning, while Texas, OU and Baylor are the most against it. It’s not difficult to see who’s going to win that battle.

But the Big 12 battle is not the only one being waged, and this is why college football in particular is so tricky. Even if the Big 12 provides clearance to resume meeting and training, individual universities might not. Or the 10 universities in the Big 12 might not be uniform in reopening their campuses. Here’s the latest update from Burns Hargis and Oklahoma State.

With the completion of the academic year, we are continuing to reevaluate the schedule for the return of employees to campus. While many parts of the community and state are beginning to open, the university has determined the healthiest path forward is to remain closed to visitors until July 7.

While the campus is closed to visitors, employees will continue to work from home at the direction of their supervisor. Supervisors will advise those employees whose functions cannot be performed remotely and require on-campus work. When on campus, employees should observe social distancing and wear a face covering when social distancing is not possible. If an employee does not have a face covering, contact your supervisor and one will be provided. Any employees who do come to campus should not come to work sick. [okstate]

While it wouldn’t be difficult to make a caveat for teams and players to return before July 7 (you can use the “require on-campus work” language), I’m not sure it would be the greatest look either. So in theory — unless something changes — even if the Big 12 clears teams to return, it doesn’t look like Oklahoma State would do so until July 7. Again, that could very easily change based on the decision the Big 12 makes. OSU could tell football they’re good to go and on-campus workouts and meetings could resume, limited as they are during the summer.

There are other hurdles as well. The NCAA is supposed to vote this week about whether to lift its own May 31 ban on on-campus activity, thus clearing the way for conferences and individual schools to act. That seems like the lowest bar to clear here and it looks like it will pass, but it’s still a bar.

And boy are things going to look different when they return in any capacity, whether that’s three weeks from now or three months from now. Ross Dellenger of SI outlined what this new world is going to be like.

Coaches and staff members in masks and gloves. Temperature tests at the front door. Hand sanitizing stations around every corner. Weight room squat racks 20 feet apart. Stairwells with one-way movement, a set for going up and another for going down. Elevators with a maximum occupancy of two. Nutrition stations offering only packaged snacks. [Sports Illustrated]

This is where it gets philosophically difficult, right? How many cases are too many cases (for a university program, a conference and a sport)? The coronavirus isn’t leaving, and a vaccine has not been produced. So how do we — and I’m speaking more broadly than just college football now — get comfortable with a corona-adjacent life? What do those numbers look like? What are the cultural processes we can look at and say, “OK, I know this isn’t perfect, but I’m good with that?”

This from Gordon Gee about college football resonated with me as emblematic of society.

West Virginia President E. Gordon Gee, who also has served as president at Ohio State and Vanderbilt, told ESPN’s Paul Finebaum that athletics should return in the fall. “We need to get over the panic,” Gee said. “If one of our athletes gets coronavirus, we can’t just shut the whole thing down. We have to learn how to control that part of it.” [Dallas Morning News]

I think we can all agree that complete eradication of this virus is impossible without self-isolating until a vaccine is produced, which also seems if not impossible then entirely unsustainable for everyone. So … how do we, as a culture and a society, do this in the interim? How do we settle on numbers between zero (impossible) and whatever the maximum projection is? It’s an impossible question because we’ve never done it before. Nobody alive has ever done it before in a meaningful way in the 21st century.

The question I’ve been wrestling with personally is how to resume a meaningful, thriving life in the public sphere in a way that is wise, prudent and selfless because I think there’s a way to do this that can galvanize our cities, states and country. Us as a people. I’m not mega-confident that’s actually going to happen, but I do think it’s possible. Maybe this makes me naive or an idealist.

This is more or less what I imagine the NCAA, the Big 12 and its board of directors, and Oklahoma State decision-makers at the highest level are asking as well. What will be interesting is whether they all come up with different answers. Inevitably in college football, because your 130 schools are spread out across the country, the conclusions to these questions will be myriad and staggered. This engenders chaos, especially when power is as decentralized as it is in college football.

I suspect Oklahoma State’s football program will resume a new normal world on a timetable that’s reasonable and effective, and I suspect other Big 12 schools will as well. I have no idea what this means for the college football season as a whole, though, and at this point — even as June approaches — I’m not sure anyone else does either.