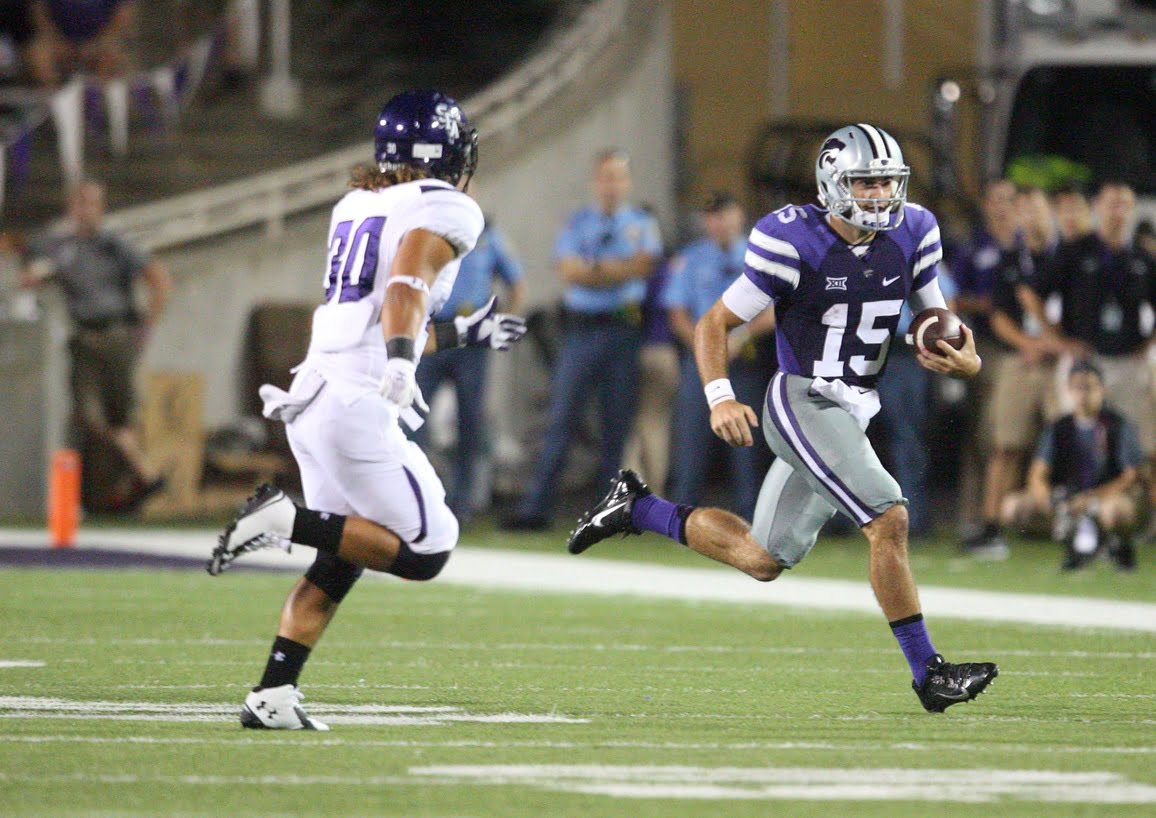 If you have yet to join the craze that is fantasy football, do yourself a favor and stay away. It’s wildly addicting, capable of ruining friendships and can sometimes lead to rooting for a team/player you don’t even like.

That said, you’ve likely already taken the plunge and know the unbreakable grasp fantasy football can have on a person. These power rankings are here to play off that addiction.

Using ESPN’s standard fantasy scoring, I will be taking a weekly look at the Big 12 quarterback play and formulating each starter’s points as if he were the starter on your fantasy squad. The points break down as follows:

Pretty simple, right? Now that you know how the points are accumulated, let’s take a look at the Big XII version of Fantasy QB Power Rankings: Week 1.

10. Montell Cozart, Kansas: 0 Points
This one is a little unfair, as Cozart and the Jayhawks had a bye in week 1. That said, there is little evidence that leads me to believe he’ll make much progress up the power rankings throughout the season. He does have an ability to escape the pocket, and rushing yards/touchdowns can quickly boost the fantasy resume. That said, we’re talking about Kansas and we’re not talking about basketball. Don’t expect too much here.

The only starting Big 12 quarterback that failed to reach 10 fantasy points, Richardson’s score is pretty indicative of his team’s overall effort on Saturday. Getting drummed 34-14 by Missouri Valley superpower, North Dakota State, Richardson was downright abysmal.

His 151 yards and two interceptions were only boosted by his 58 rushing yards, but this performance was barely better than Kansas’ Montell Cozart…and he didn’t even play.

Knight and the Sooners ran roughshod over Louisiana Tech on Saturday, en route to a 48-16 win. While the team played well overall, Knight was largely unimpressive as he threw for 253 yards and a touchdown, but turned the ball over through both an interception and a fumble.

If we were taking the Sugar Bowl into account, Knight would be a fantasy stud. But hey, that was last season.

While Ash was certainly not the worst Big 12 quarterback on Saturday, he did suffer from concussion-like symptoms—the same injury that cost him 10 games a year ago. He threw for 190 yards and a score, and boosted his fantasy day with a short rushing touchdown, but lost two fumbles in a 38-7 win over North Texas.

Sophomore Tyrone Swoopes gets the start against BYU on Saturday, as Ash’s long term health will take center stage in any comeback attempt. 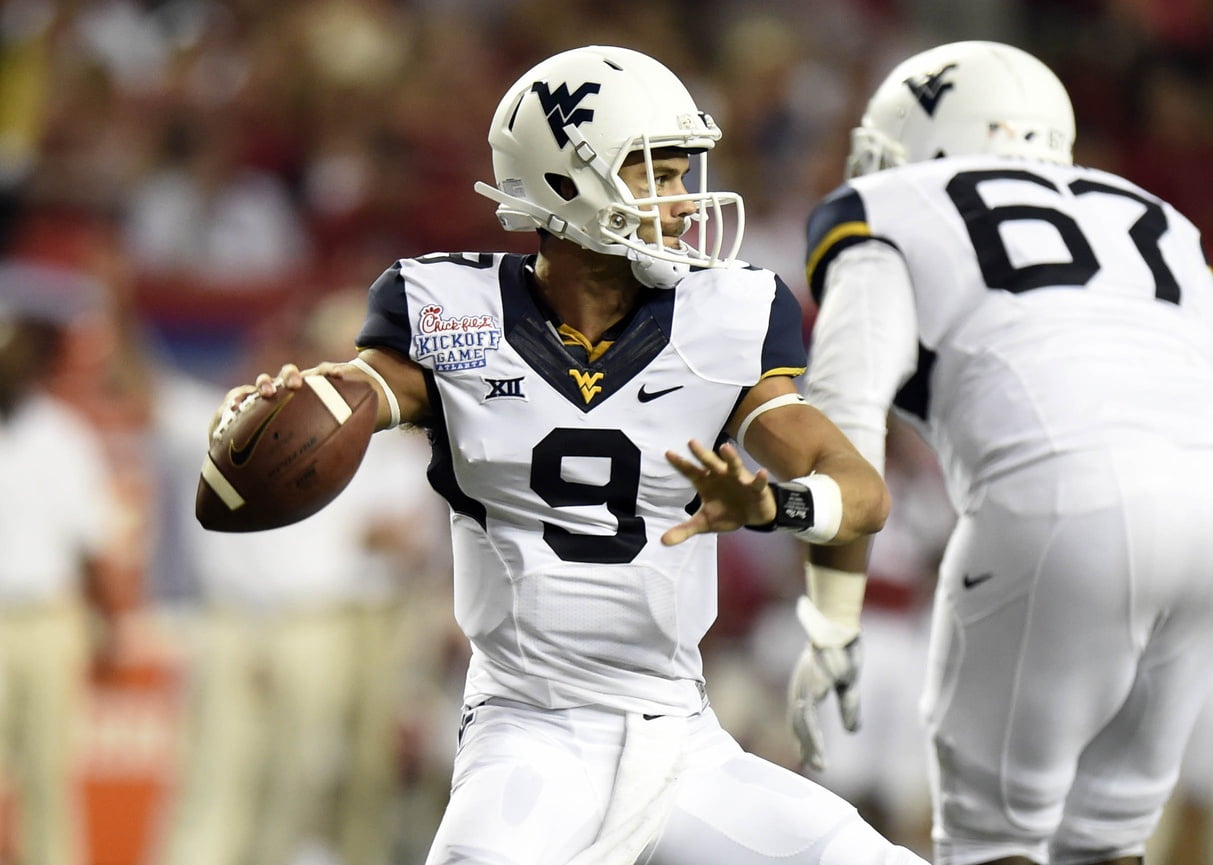 If I was taking the level of difficulty faced in week 1 into consideration, Trickett would undoubtedly find himself higher on the list. Throwing for 365 yards and a touchdown against 2nd ranked Alabama, Trickett and the Mountaineers almost stunned America, eventually losing 33-23. Trickett should continue to see success in Dana Holgorson’s offense, so I’d expect him to be in the mix for most of the season.

Despite leaving in the first half with a back injury against SMU, Petty was able to toss two touchdowns and run for another in the first two quarters.

Widely believed to be the best quarterback in the Big 12, Petty should and will find himself higher on this list in the coming weeks. But while he believes he’ll be ready on Saturday for Northwestern State, don’t be shocked if Art Briles takes the cautious route on Saturday.

The Bears can win this one without the Heisman-hopeful.

Another performance that would benefit from taking level of difficulty into consideration, Walsh and the Cowboys went to-to-toe with defending national champion Florida State for a full 60 minutes.

Walsh was his polarizing self in the 37-31 loss, as he threw an early pick-six and coughed up a late fumble that may have cost the Cowboys the game. Taking that into consideration, his 254 yards of offense and three scores (One passing, two rushing) were almost enough, despite virtually no threat of going deep.

He’s an interesting guy to watch in the coming weeks, but his ability to scramble greatly boosts his fantasy relevance.

The newly crowned Big 12 Offensive Player of the Week was impressive in week 1, as he threw for 320 yards and two scores. He also tacked on 29 rushing yards and a touchdown. TCU coach, Gary Patterson, didn’t name a starter until week 1, so this worked out swimmingly for the Horned Frogs.

In true Red Raider fashion, Webb came out throwing against Central Arkansas. Despite a slow start, he finished with 452 yards, four touchdowns and two interceptions—easily throwing for the most yards of any Big 12 quarterback.

The Fightin’ Kingsburys only edged out Central Arkansas 42-35, but after his second pick of the night, Webb finished 28-of-35 for 387 yards and all four scores. The boys from Lubbock are scary when he gets going as such.

Waters was a touchdown machine on Saturday, with two scores through the air and two on the ground.

His 278 total yards of offense paced the Wildcats in a convincing 55-16 thrashing of Stephen F. Austin, although the end result is hardly any surprise at all. Waters will look to keep it going this weekend, as the 20th ranked Wildcats head to Ames to take on Iowa State.