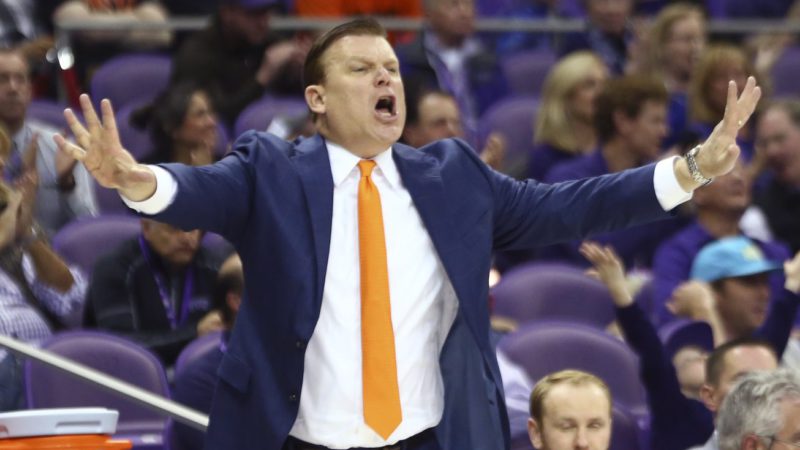 After his Cowboys’ 71-68 road win over TCU, first-year head coach Brad Underwood has a lot to be proud of:

And he still has this to puff his chest about. Underwood remains the winningest active coach in college hoops. It will take a few years to get the inflated SFA record normalized, but it’s still pretty impressive that he’s hanging on to this almost all the way through Year 1 in Stillwater.

Brad Underwood is now 106-23 on his career. That moves his win percentage to .822, which is tops among all active coaches. #okstate pic.twitter.com/ovWn2MmPPS

After coming to OSU with an 89-14 record, Underwood became one of the fastest coaches in NCAA history to reach 100 wins. But it didn’t happen the game we thought it might. Or the next one. OSU swooned to an 0-6 conference start after a 10-2 non-conference start.

But those early Big 12 woes seem like ancient history with the Cowboys’ current streak of seven wins in eight tries including a win over Arkansas in the SEC/Big 12 Challenge. But Underwood doesn’t want his team to forget how they started.

”It would have been very easy after a third of the season just to say, ‘OK, this isn’t going the right direction,”’ Underwood said. ”Those guys never bought into that. And now it’s become something that those guys can bite into and really relish.”

Speaking of accomplishments, in his first three seasons as a head coach, Underwood accomplished all of the following:

One of those streaks will end this year, but the other two are still in front of his team.

The last place Sooners — who are now without injured senior point guard Jordan Woodard — have been on an opposite trajectory. But that won’t change Underwood’s message to his team.

”In this league, if you think about anything beyond the next game, you’re going to lose,” Underwood said.