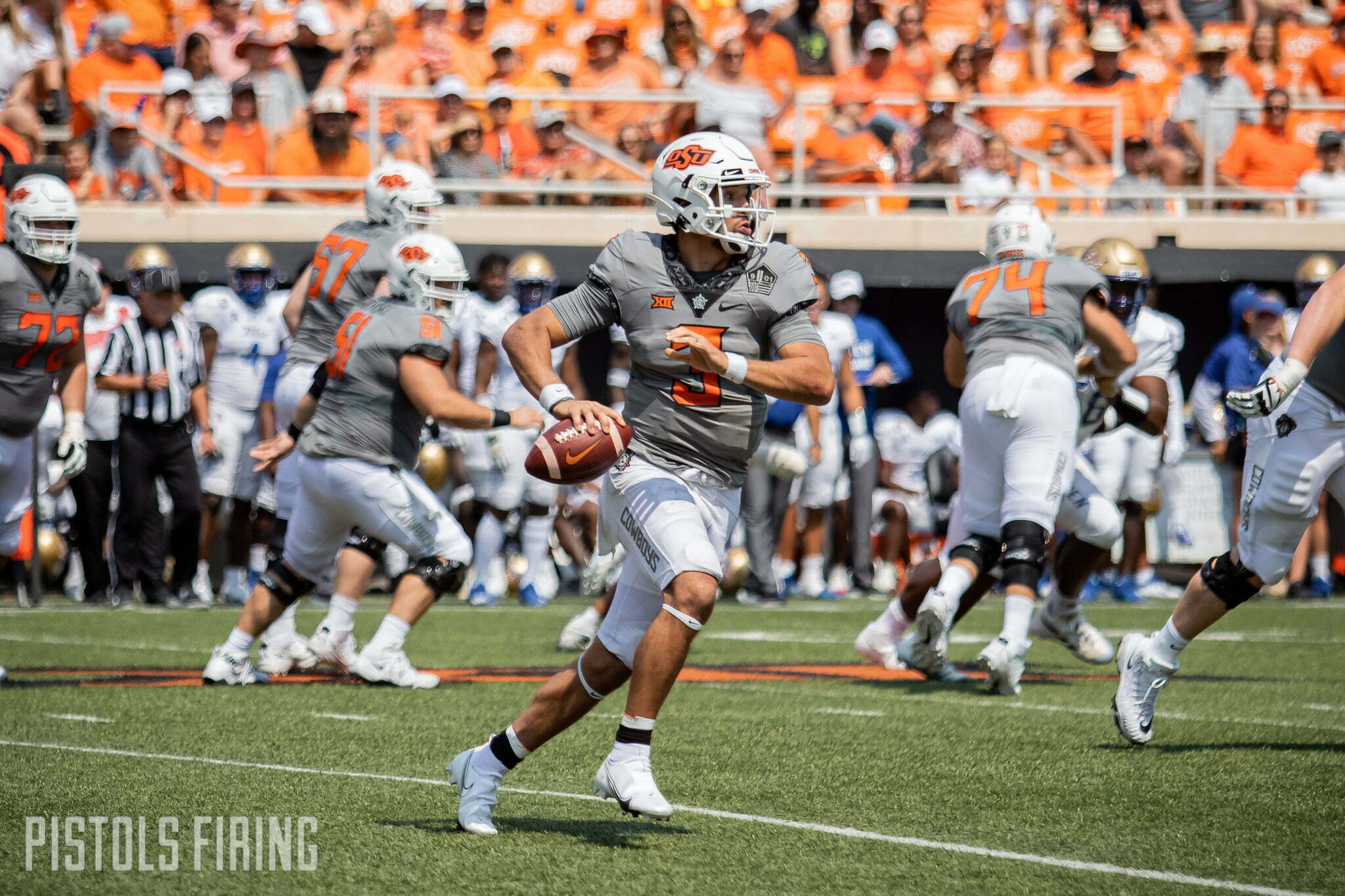 How good is Spencer Sanders? Or more befitting, how good can he be?

It’s a loaded question, and it’s made even more so thanks to the give-and-take that comes with rooting for the man Mike Gundy dubbed a “Tasmanian Devil.” But it’s an important question, one fans would ask of any franchise QB.

In attempt to gauge his progress, I recently went down a statistical rabbit hole comparing OSU’s current QB1, through his first 23 career games, with some of the best to ever sling the rock in Stilly, each through his first 23. Here’s what I came up with followed by my initial thoughts.

• A couple of things stick out and the first one is the interception percentage. Sanders leads the pack on this column which should come as a surprise to few, but not far behind him is Brandon Weeden, the GOAT. For reference, Rudolph’s 1.96% is the lowest in school history.

• On the other hand, Sanders is more accurate to this point in his career, though just slightly, than everyone on the list besides Weeden.

• He’s also not doing too shabby in the Win% which is, again, the most important stat on the board. But what a run from Weeden.

To clarify, Start W/L and Win% represent every start the player made during his career. The rest of the columns include raw numbers from their first 23 appearances. I was hoping to compare apples to apples, somewhat, and then see where that QB ended as a winner. Maybe that will give us an idea of where Sanders lands when his time is done.

And only starts were included, so Sanders isn’t dinged for the Texas Bowl in 2019, when he came in for a few plays without attempting a pass. And Rudolph isn’t dinged for hobbling onto the field for one drive in Bedlam 2015.

• How about Weeden averaging 2.5 passing TDs per game during his first 23? There’s a reason he’s this weekend’s Orange Power VIP. Weeden would remain on that clip for his career, totaling 75 in 30 games. That says a lot about Weeden, but it also says a lot about Justin Blackmon and the big-play offense that fueled those 2010 and 2011 teams.

• There is a through-line separating Weeden and Rudolph from the rest of the pack, and not only in win percentage. It also divides the traditional pocket passers from the dual-threat QBs. It’s probably too broad a stroke to draw any conclusions with, but I thought it was a least interesting to see.

• In regards to omissions from the list, Taylor Cornelius played in 21 games, and it would have been unfair to lump him into this group statistically since his first eight were backing up Rudolph. For the same reason, I left out Clint Chelf’s 30 games — with serious numbers — because he spent his first 10 backing up Weeden.

What Does It Mean?

Comparisons are troublesome because stacking up any two passers — even from the same program and era — essentially ignores a plethora of other determining/detrimental details such as O-line quality, coaching, the team’s defense and who the heck he had to throw it to.

Sanders has had moments when he’s made you scratch your head and others when he’s blown your mind. He’s the picture of barely-tapped potential. A dynamic playmaker who’s definitely scratched the surface of his ability, but it’s apparent that there’s still much yet uncovered.

“He is who he is,” said Gundy of Sanders this week. “He’s the Tasmanian Devil, right? He runs all over the place. He’s able to do a cartwheel, get up, throw a completion. He almost fell down and put the ball on the ground on naked the other day for no reason, that’s just who he is. He plays competitively. He plays full speed.

“You have to be willing to accept certain things in a game with him because you’re going to get the other. He’s the same guy. That’s who he is, except he just understands a little more.”

It’s easy to forget that there were plenty of Mason Rudolph doubters throughout his record-breaking years, and he’s the winningest QB in OSU history. There were even some Brandon Weeden naysayers — especially early — even if none of them would now raise their hand. A certain amount of outside grumbling comes with the job, and Sanders is neither immune to nor abashed of it.

The good news is that, at least early in this season, Sanders appears to be on an upward trajectory and, starting in the second half of 2020, has been less careless with the ball. That’s continued into 2021. Aside from a pair of fumbles, neither of which ended up in enemy hands, and his head-scratching pick-six, there isn’t much to point to. He’s totaled just one turnover through three games. (Knock on whatever wooden object is within reach.)

And with 300-plus passing yards and three total scores against Kansas State, Sanders is coming off the best game of his young season.

“He’s matured considerably,” said Gundy. “He was better last year, and he’s even better this year and that comes with experience. He’s at a position that takes and deals with a lot from different angles, but what I was referring to with him is you have a very competitive, humble, unselfish person that loves to play football. I’ve never heard him say a bad word about anybody on our team. I’ve never heard him complain about not having healthy linemen last year. I didn’t hear him complain this year about not having wide receivers. He just goes and plays. He’s first class, he’s got character, he’s humbled, he’s unselfish. Generally good things happen to people like that, and that’s what’s happened with him so far.

“He’s just a good kid. He never complains. He’s happy with where he’s at. He loves being here. He loves to play football. He doesn’t point the finger at anybody, and if he makes a mistake, he’s willing to say he made a mistake and if not, they talk about it and they move on and that’s a sign of maturity.”

Is Sanders the QB that can drive the Pokes to Arlington? Is OSU even a viable vehicle to make the trip? Both remain to be seen, but it was interesting to see how he stacked up — at least statistically — to some of the best to do it at OSU.