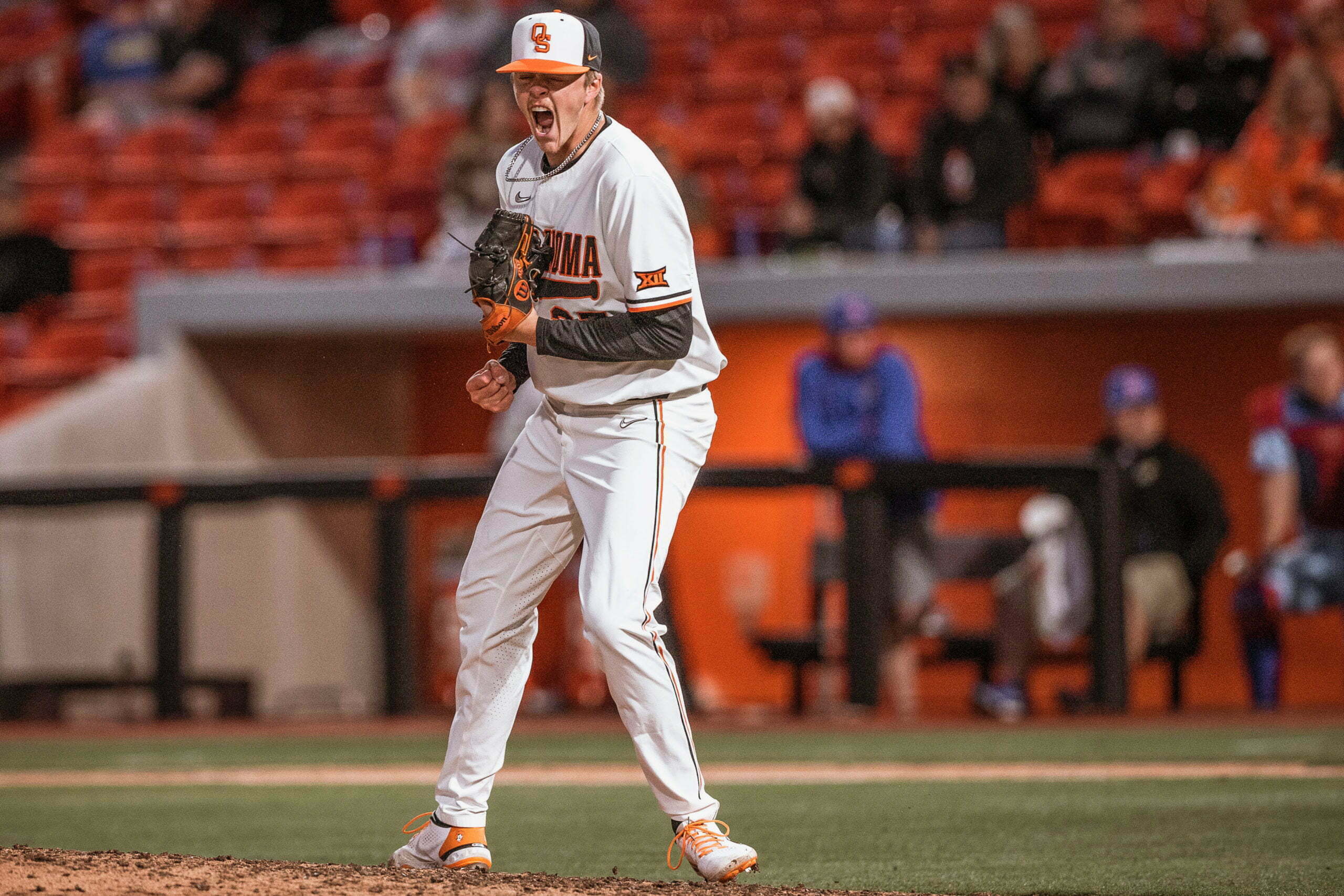 STILLWATER — Justin Campbell threw a quick seventh inning, and Rob Walton was waiting on him when he got back to the dugout.

“What are we doing?” Walton asked.

“This is my [bleeping] game,” Campbell replied.

Campbell threw a complete game in Oklahoma State’s 4-2 win against Kansas in the teams’ Big 12 opener. Campbell threw 110 pitches where he gave up the two runs off three hits while walking one and striking out nine. That came after Campbell no-hit the Jayhawks last season.

On a few occasions, Campbell would let out a roar that all of O’Brate Stadium could hear before a third-out strikeout would even hit Chase Adkison’s glove. Campbell was fiery, earning the Cowboys their ninth straight victory. After the game, Campbell called it, “pitching with passion.”

“I think the fire that he pitches with is a rare skill,” OSU coach Josh Holliday said. “Some people don’t function well when they get to that point where they’re on edge. The edge takes him to the next level. He’s kinda learned how to manage it.

“He’s one of the best competitors I’ve ever coached. I don’t know of any better. We’ve certainly had some great ones, but he’s one of the best I’ve ever coached. I’m going to enjoy every Friday night the rest of this year because there’s not many times you can write someone’s name in the lineup and know that whatever happens you have the alpha male on the field on behalf of your team pitching that game. It’s a pretty good feeling.”

Of the 110 pitches Campbell threw, he had one bad one. Caleb Upshaw drilled a second-inning fastball to center, a two-run home run.

But that was enough to wake the Cowboy bats up. With runners on second and third in the bottom of the second, Adkison, a sophomore, hit his fourth home run in the past five games. This one sliced down the left-field line, narrowly staying fair and narrowly getting over the fence and into the Cowboys’ bullpen.

The Cowboys’ other run came in the fifth when Jake Thompson drew a two-out walk, and Nolan McLean doubled to the gap in left-center.

Thanks to Campbell’s nine innings, the Cowboys have a full bullpen entering Game 2 of the teams’ series, which is scheduled to start at 6 p.m. Saturday.

It was a good day for OSU pitchers in Stillwater. OSU softball’s Kelly Maxwell threw a no-hitter against Texas Tech in the Cowgirls’ 7-0 win to start Big 12 play.