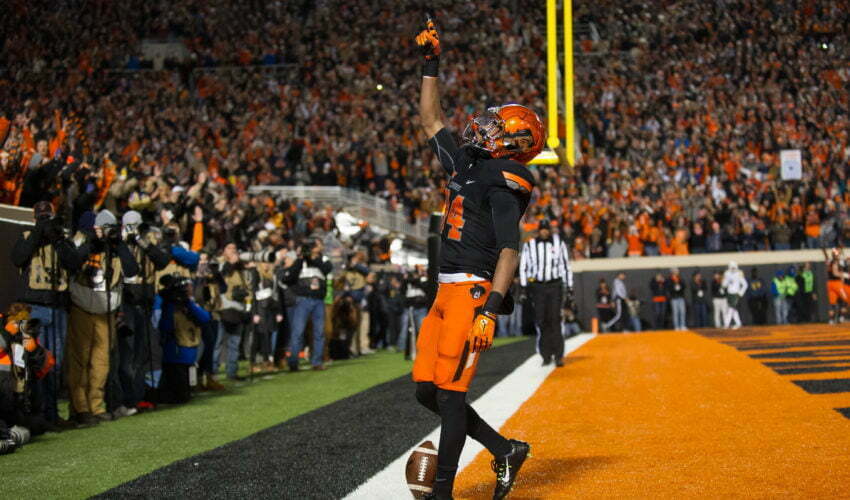 Many people expect that sophomore Jalen McCleskey will be one of OSU’s breakout players in 2016. McCleskey had a respectable freshman campaign, and now with slot receiver David Glidden gone, he will presumably play a bigger role in the offense. So how can the Cowboys get McCleskey involved? They could do so in any number of ways, and that’s what this week’s Chalk Talk will be about. Today, we’re going to look how No. 1 can get easily involved in the screen game.

Screens are a great way to get talented players in space. There are a lot of different kinds of screens, including the traditional jailbreak, slip or slow screens. Your most basic wide receiver screens include the tunnel or middle screen:

Or some type of attachment bubble or now screen.

A lot of true wide receiver screens include pulling lineman. But there are many air raid coaches, including famed air raid coach Bob Stitt, that favor screens with no lineman involved. One of those said screens is the drag screen, which is prevalent in spread offenses both at at the collegiate and professional level. In this post, we’re going to focus specifically on this kind of screen. Here’s a still of the old OSU Holgorsen offense running the play with Justin Blackmon as the primary receiver: As you can see, the play features one receiver ‘dragging’ across the field. The running back’s job is to block the strong-side linebacker or, if it’s against man coverage, block the receiver’s defender and take his own defender with him. All the other receivers run streaks to get the defense upfield, and the inside slot receiver tries to pick off the dragging receiver’s defender if against man coverage.

The play is a high-percentage throw and a good way to get easy yards after the catch. And if the run game isn’t working out, easy completions like this can act as a substitute. Additionally, teams can run this out of pretty much any formation.

Some teams run it from trips (but from the weak side):

And some from an empty set:

The best part of this play is that it’s flexible. Against man, it becomes a race to the sideline, and the defender has to try and catch up to the speedy receiver. Against zone, the quarterback just has to time the throw correctly to allow the receiver to catch the ball with the other players in position to block.

With his speed and elusiveness, McCleskey would thrive on plays like this; when not overused, it’s practically free yardage. Hopefully easy plays like this will be installed to both give the right players the proper touches and to take pressure off of Mason Rudolph; they are quick and easy and could jumpstart any drive.

How would you use McCleskey in the screen game? Leave your opinions below in the comments!