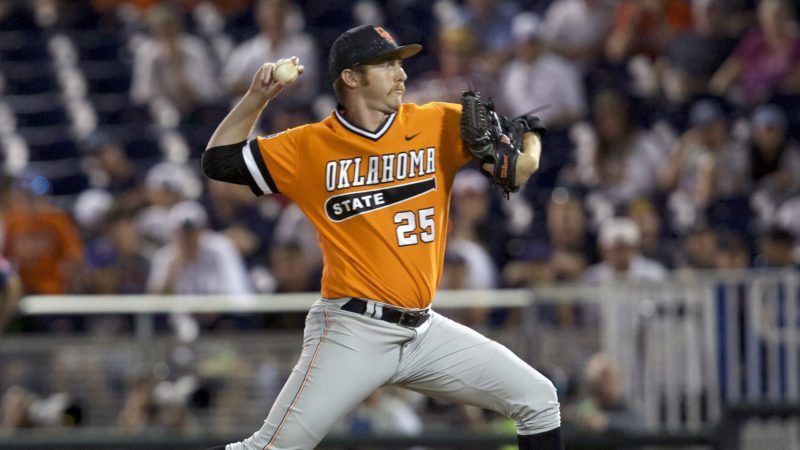 When Ryan Sluder talks with the media postgame, he typically greets them with a smile that even men envy. There were no pearly whites Saturday.

He gave a meek grin that screamed, “This isn’t the place I most want to be right now.”

The Oklahoma State baseball team lost 5-3 after allowing five unearned runs in the final four innings in game 2 of its series with West Virginia. The Mountaineers clung to one run until there was one out in the top of the ninth before Cole Austin ripped a 2-run homer above the left-field wall.

Sluder said the Cowboys’ attitude was never the same.

But there was one moment when Sluder’s voice raised and those chompers saw the light of day: When he was asked about the return of senior pitcher Trey Cobb.

Cobb has been out all season with a broken bone in his throwing elbow. He came in at the start of the sixth inning in relief of starter Jonathan Heasley. As he left the bullpen, “Space Jam” came on at Allie P. for the first time since April 23 — 343 days ago.

“I almost forgot it was even my walk-out,” Cobb said. “In the bullpen, they were like, ‘What’s your walk-out?’ And I was like, ‘I don’t know. Do bullpen coaches get a walk-out song?'”

Cobb said he didn’t think anyone realized he was coming in until he hit the infield dirt. Third baseman Garrett Benge turned around to him; Andrew Rosa at first came across to Cobb; And everyone in the dugout started screaming, “Booger’s back,” Cobb said.

Cobb said it didn’t help after he gave up the first run of the game, returned to the dugout and his teammates were getting excited and giving him praise.

Coach Josh Holliday said it was special to see such a great player out there again, but more important, such a good person.

“One real positive to take away from today is just to get him back with our team for many reasons,” Holliday said.

Although the thought of not throwing strikes came to his mind, Cobb said no one was more nervous than Harambe, the toy gorilla Cobb bought for the pitching staff a couple of weeks ago. Harambe is given to the pitcher who throws the best in the previous game, but make no mistake — Harambe belongs to Cobb.

Cobb said Harambe had to have been wondering where his owner was going.

“He bought me, and he’s leaving me in here with all these guys who have owned me for like one or two nights, but this guy took me off the shelf and saved my life,” Cobb said Harambe must have been thinking.

Harambe won’t have to worry too often, not right away at least, Cobb said. The righty senior is scheduled to throw again in next weekend’s series against Kansas State, but he wanted to go Tuesday against Wichita State, he told pitching coach Rob Walton.

Walton told him that wouldn’t happen, and Holliday said he will find his niche in time. Cobb made 24 appearances last season. Twelve of those were starts, and he also served as the closer for a part of the year. Saturday though, was about the emotion of the long-awaited return.

“It was really cool to just feel the energy from the team and from the coaches about them being excited that I was back,” Cobb said. “It made me feel special.”