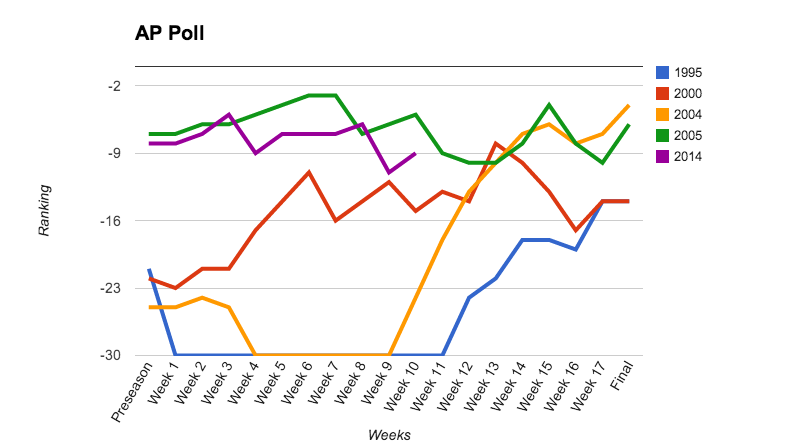 I (along with many of you) have been a little down on this year’s OSU basketball team so I thought it might be fun to go back and see how it compared nationally to the four best seasons in the Sutton/Ford era.

Other note: I had to sort of hack the vertical axis because I couldn’t figure out how to flip the graph where No. 1 was higher than No. 30 (or unranked), that’s why you see the negative numbers over there.

By the way, here are the final rankings for those four teams:

The 2005 team (add JamesOn, remove Tony) is actually the best comp for this year’s squad. Started out high and maintained it pretty much all year.

Also strange that the two Final Four teams OSU has had were unranked for much of the year. I think that shows how difficult it is to play at an elite level for five straight months.

I think the thing we’re all mostly worried about is sustainability — both under Ford and without Cobbins.

Those Eddie teams seemed to have a pace to them — that is, they would get better as the Big 12 season progressed. That didn’t happen last year and that might have been an anomaly but I’m slightly concerned that when we look back at this season we’ll point to the Memphis game (the first one_ as this team’s apex).

Hopefully not but lots of big-boy road games loom…starting Saturday in Lawrence.