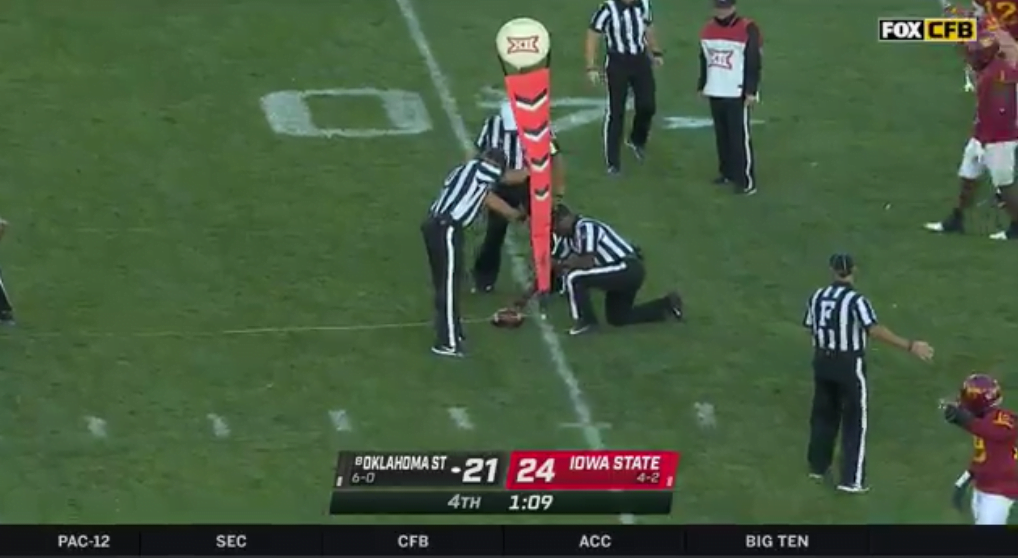 Trailing 24-21 in a hostile environment, Oklahoma State on Saturday needed two yards on fourth down with just under 90 seconds remaining to keep its drive — and perfect season — alive. It got roughly one yard and 2.99 feet instead.

From the ISU 42-yard line, Spencer Sanders hit Brennan Presley for a quick bubble screen to try and pop him open and into space to gather the yardage. He scrapped his way nearly there and was dragged by offensive lineman Danny Godlevske to what could reasonably have been considered first-down yardage by the naked eye. But the call on the field was that he was short. And, alas, a review was conducted and there was not enough evidence to overturn the initial ruling.

“Is he on the body? That’s what it looks like. But does he fall far enough forward? I just don’t think there’s enough to be changed,” said FOX rules analyst Mike Pereira reviewing the play. “You have to assume that the play on the field is correct, so it’s got to be indisputable that it’s not. And it is very close. . . “

Moments later the officiating crew announced that the “ruling on the field stands,” meaning they could not confirm the initial spot but also did not have enough video evidence to change the spot.

“It just was such that you couldn’t overturn it,” added Pereira.

The play happened with 1:09 remaining in regulation and Iowa State was able to take two kneels to end the game.

Had the ruling on the field been a first down instead of ruling Presley just short, it probably would have stood. It was that close. It’s hard to definitively make the case that the initial ruling was right or wrong but it certainly appeared as if Godlevske dragging Presley forward got him to first-down yardage. Here’s another angle for posterity with a word of caution: This may cause pain in your heart area and possible tears in the eyes. I mean, he’s definitely got the first down, right?

OSU had plenty of opportunities to win the game so it’s not as if the game can be pinned on one play, but for OSU it has to be tough knowing it was this close to potentially pulling out another come-from-behind win as an underdog. Instead, it will move to Week 8 with a 6-1 record with Kansas — a team that narrowly lost to OU on Saturday — on deck next week back home in Stillwater.