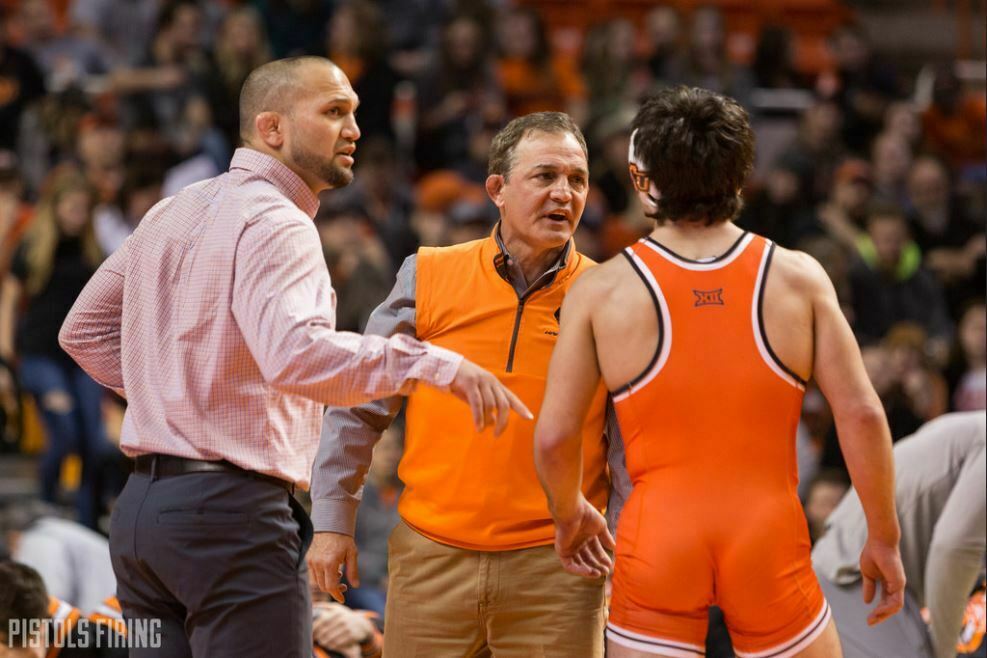 Oklahoma State wrestling is in an interesting recruiting spot currently. This year Dean Heil is the only starter graduating and they are loaded up to fill the gap left when he graduates.

The following year the Cowboys graduate a lot of their upper weights, but have filled most of those holes with current commits. Travis Wittlake, Anthony Montalvo, and Daniel Kerkvliet all look like they’re equipped to solidify the top half of the lineup in a year where OSU will without a doubt having the stongest batch of lower weights in the entire country.

The question then becomes what is the plan to plug some of the gaps that aren’t currently covered when Nick Piccinnini, Kaid Brock, Joe Smith and Boo Lewallen graduate, and who fills in behind Chandler Rogers after next year if Joe Smith doesn’t go up to 165?

One thing is the Cowboys have a bit of a log jam at the lower weights currently and those will separate out a bit after 2020. Ideally, OSU either signs some pretty highly touted guys in those spots in 2019 or a few already in the lineup develop a little more than most expect. Currently there aren’t any notable national OSU commits at the lower weights that would fill in and there really aren’t many local kids that have especially high expectations out of that class. There could definitely be some that are being overlooked here, but that’s basically where OSU is.

One option is bring in some guys from NEO. Notably this year the starter for the Cowboys at 174 is Jacobe Smith, who spent two years at NEO before coming to OSU, redshirting, then taking over as the starter. The Cowboys also have Blake Andrews, who many had pegged as the likely starter this year at heavyweight before Derek White made the jump from 197.

NEO initiated the reinstatement of their wrestling program in 2012 and hired the best small college coach in the country in Joe Renfro. It’s pretty incredible to think that with all the wrestling history in the state there wasn’t a junior college program in Oklahoma at the time. In their first year actually wrestling in 2013 he won an NJCAA title, then another in 2014, and 2016. They currently have the #1 ranked team in the country and a pretty good batch of wrestlers that could potentially plug in for the Cowboys.

Here is the lineup for the Norseman along with their weight, current rank, and class.

Wyatt Jordan is probably the most talented wrestler on this team. He wrestled in high school at Collinsville and for current Cowboy Gary Wayne Harding’s dad. Interestingly he actually quit wrestling twice. In high school he came back and won a state title. After a year off from college wrestling he came back and won an JUCO title and this year is projected to do it again. Theoretically Jordan could come to OSU, redshirt for a year, and pop right into the lineup again at 165 when Chandler Rogers graduates. In Joe Smith’s current redshirt year he’s wrestled from 165 all the way up at 174, but the staff has said the plan is for him to be back at 157 next year. If Joe stays down at 157 his senior year, bringing in Jordan would be a solid fill for 165 for that year.

They have freshman that are ranked first at heavyweight and 149. Brian Andrews, brother of current Cowboy heavyweight Blake Andrews, would be an asset in the room for OSU, but it looks like the Cowboys have a solid long term fill with World Champion Greg Kerkvliet. Kendon Lee at 149, is originally from Louisiana and relocated to Stillwater his junior year, he moved to Oklahoma because he had hit a wall in Louisiana where he didn’t have much room to develop. He’s flourished at NEO. Could he be a Daniel Cormier type talent who came from Louisiana, went to a junior college, then took off after coming to OSU? It’s tough to project that high of a ceiling for him, but when Boo Lewallen graduates a junior college champ isn’t a bad fill.

If Jack Karstetter, Daton Fix’ cousin, has a good couple seasons don’t be surprised if they try and get him here to help fill the void from Kaid Brock and Nick Piccinnini.

It’s not ideal for the Cowboys to fill out their lineup with JUCO kids, you’d rather have 10 Daton Fix caliber wrestlers coming in, but when you consider that the roster will have 3 World Medalists in Daton Fix, Travis Wittlake, and Daniel Kerkvliet along with blue chips Kaden Gfeller and Anthony Montalvo and some potential big names in the 2020 class these NEO guys could be great supplements to the OSU roster.