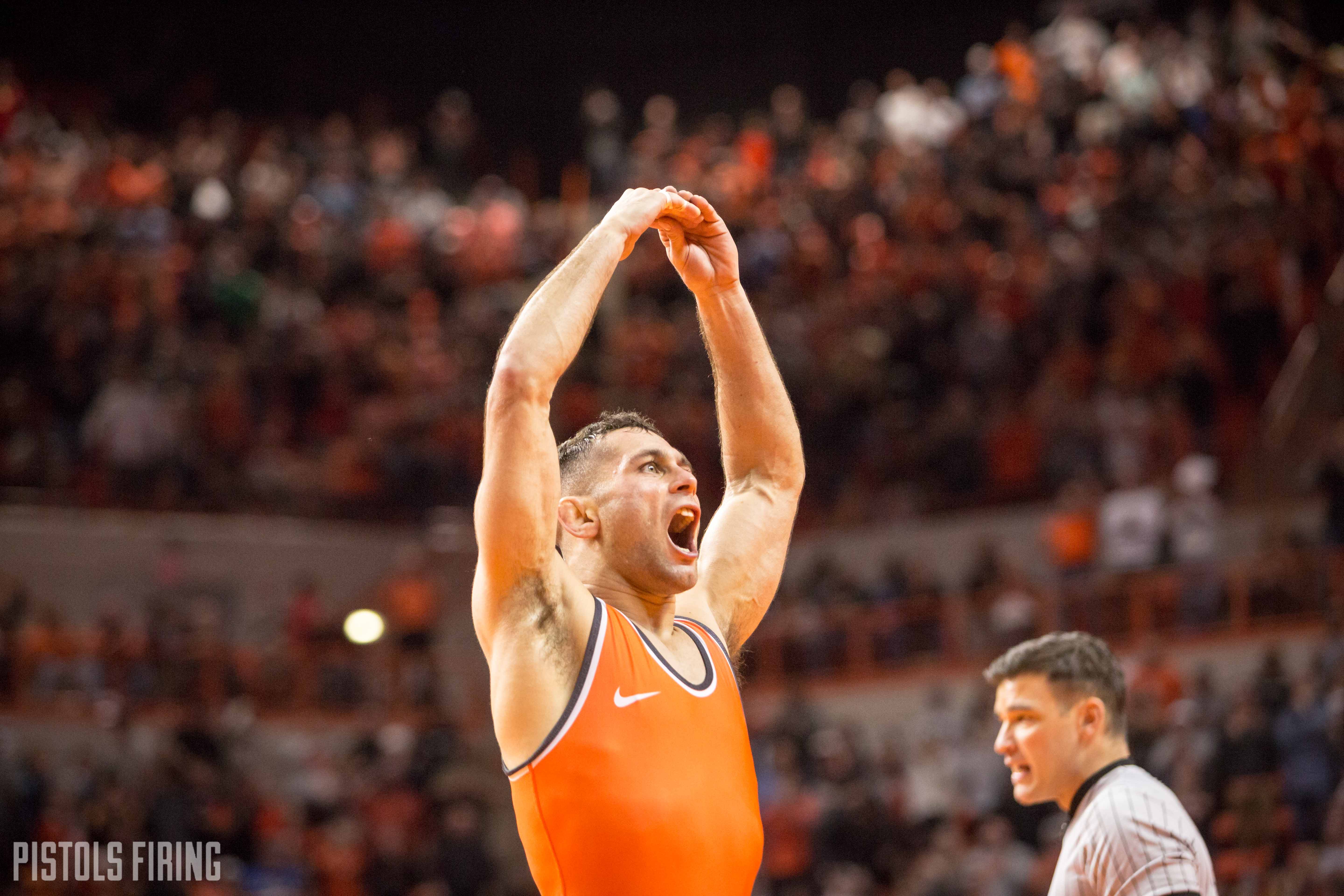 A lot to digest in my six thoughts on the Iowa dual, so let’s just dive right in.

1. Gallagher-Iba arena was something special

I’ll apologize in advance, but elements of this subject will be the biggest focus of all of my six thoughts. It was hard to come away from that event and not be blown away by it. The sellout crowd, the atmosphere, the hype, all of it was awesome.

My wife and I took an Uber from our house to eat at Joe’s before the dual. It took us upwards of thirty minutes to travel what usually only takes about 10! And that was without having to find parking, and a few hours prior to the start of the dual. There were lines out the door at Joe’s, the Garage, and the EndZone. People were tailgating and fans were lined up at GIA hours prior to the doors opening. In Gallagher-Iba it was even better. The pop of the crowd when Nick Piccininni pinned Spencer Lee was one of the loudest things I’ve ever heard.

The place went nuts and even with a few losses from 149-165, the crowd stayed into it and picked right back up when Chandler Rogers won.

I’ve ranted about this a bit already and laid out in this article that OSU sometimes chooses to promote its other sports over wrestling, despite wrestling being one of the top-producers of wins. But OSU stepped up to the plate here.

The team that runs the OSU wrestling social media account is great and if you’re going after them with criticisms you’re going after the wrong people. They do a wonderful job with their videos, graphics, updates, etc… The issue all year has been the larger reaching main social media accounts for the athletic department. (They didn’t post anything on any of their social media accounts the week of the Bedlam dual. You should really sell something like that) This one was different though. OSU really promoted this thing into the awesome event that it was. Even Burns Hargis was tweeting about it. The work that the wrestling media team, just as it has been all year, was great. It was just nice to see the rest of the athletic department getting behind it as well.

3. I like where OSU is at heading into the postseason

Massive wins for Derek White, Nick Piccininni, and Daton Fix as far as postseason seeding is concerned. Nick Piccininni is almost certain to be a one or two seed at the NCAA tournament, Derek White should be the two, and Fix is probably looking at the two seed as well, depending on how they all wrestle at the Big 12 tournament.

Due to injuries seeding, may be a little rougher for some of the other guys. Preston Weigel will only have a few matches on the year and will likely come in to the tournament undefeated. I have no idea how they’ll seed him, but if he’s opposite Bo Nickal he’s in good shape, and not a guy I would want to run into at the NCAA tournament if I’m one of the other higher seeds. Dakota Geer and Jacobe Smith are similar, they both wrestled up much of the season, so it’s unclear how they’ll be seeded, but if their draws are decent they seem capable of making a run. Kaid Brock can make up a lot of ground at the Big 12 tournament and I think Wyatt Sheets will be able to secure a bid. He’s hit some tough competition in the last couple matches, but has looked good. I think the one big wild card left is who will they trot out at 165?

Ahead of the dual yesterday, OSU picked up a massive commitment from Jakason Burks. This adds to an already great haul that the Cowboys have coming in for that class. And there could be more. The No. 1-ranked recruit in the 2020 class, AJ Ferrari, was in attendance along with a slew of commits and a number of other top prospects. This 2020 class is already an incredible class, but I can assure that if the Cowboys land either Ferrari, or one specific other recruit that was in attendance, OSU will be hanging a bunch of new banners in the next few years. You don’t come away from duals like that without feeling like this might be an environment you want to be a part of. Money for a new wrestling room is also a big point of emphasis with this program currently, and environments like that certainly don’t hurt that effort.

John Smith said the other day that Brands came up with the idea of scheduling this late in the season. It was brilliant from a marketing standpoint for both programs and the sport. Obviously it does more for OSU than anyone, but I love the fact that even in heated rivalries like this, these coaches still have a genuine care for the sport and are not afraid to try new things that promote it and help it grow.

6. These celebrations were amazing!

Survey says… one more over the Hawks for the good guys! #okstate pic.twitter.com/RozjH0Gqet