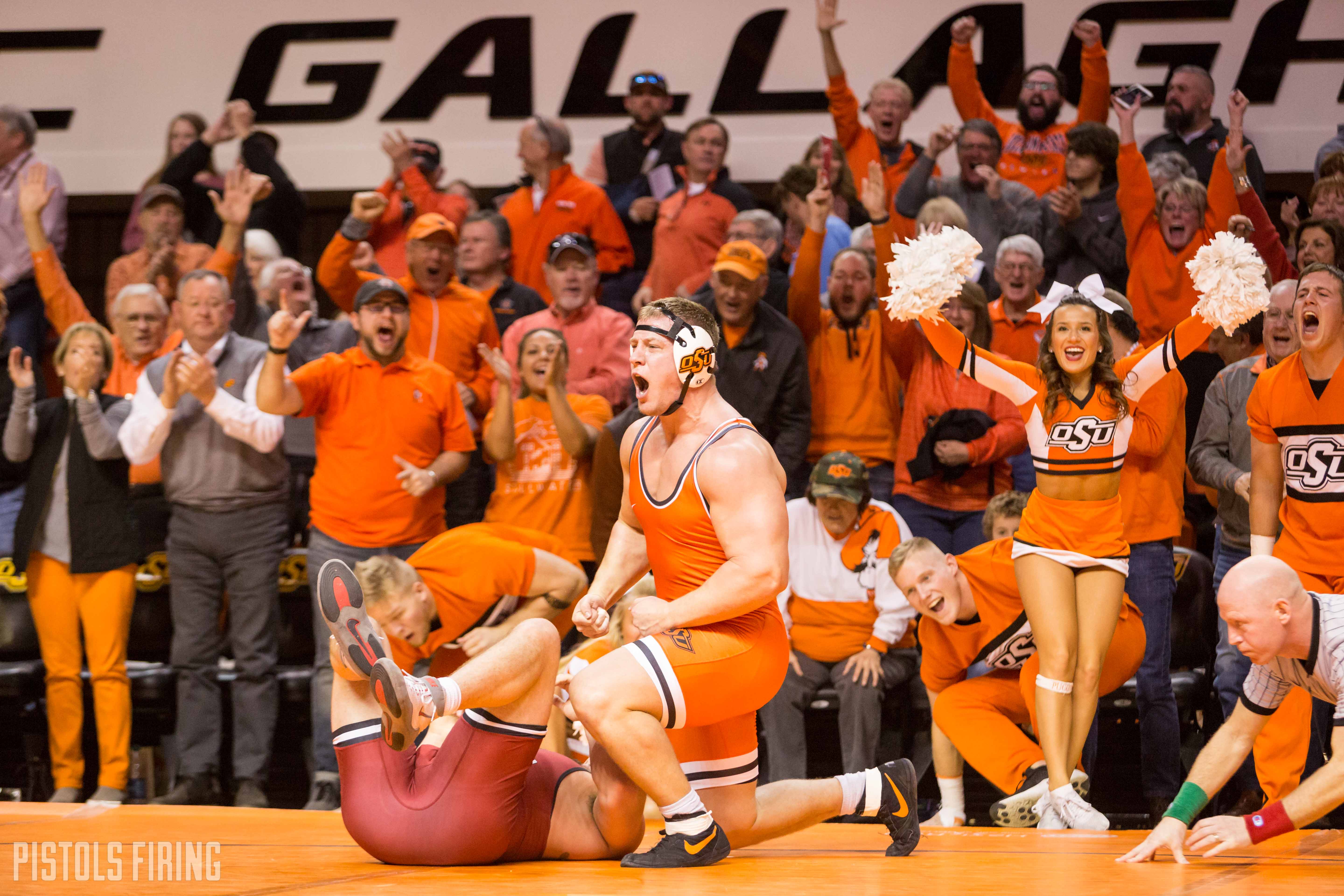 STILLWATER — Instead of a Christmas miracle, it was just another Bedlam beatdown.

Oklahoma State defeated Oklahoma 41-2 on Sunday in Gallagher-Iba Arena to take a 141-27-10 series lead over the Sooners. The night started with a Nick Piccininni pin and ended with a Derek White pin. All together, three OSU wrestlers scored falls, two had tech falls and Jacobe Smith won via major decision.

“Some of these guys have never lost one, and they’re gonna go through their four years and never lose one. That hasn’t been done. I don’t think that’s ever been done. Those are things that one day when you’re little older, you can throw it in someone’s face.”

The dual ended with a scuffle after White pinned Jake Boyd. White slapped the mat after the official called for the fall, which seemed to tick off Boyd. Boyd got up and shoved White, who went on to celebrate. It was White’s first heavyweight pin. The shove resulted in OU losing a team point for unsportsmanlike conduct.

“He had 16 points for a heavyweight before he got the pin,” Smith said. “People will come back and watch that. They like to see the big guys, and our guy just scored 16 points and then flipped him over and pinned him.”

That pin came in the third period. It took Piccininni all of 56 seconds to put away Zach Atencio at 125. Piccininni caught Atencio in a quick cradle and that was that.

Chandler Rogers scored the Cowboys’ other pin at 165. Rogers pinned Jeremy Thomas in 1:53.

The Sooners only victory of the dual came at 141, when No. 16 Dom Demas defeated No. 6 Kaid Brock, 7-6. On two occasions, Brock scored a takedown a half-second too late. Both came in the second period. Brock caught Demas with a double-leg but the two were narrowly rule out of bounds. Then at the end of the period, Brock had Demas in the air with another double-leg, but it was determined the period ended before points were awarded. Demas took a rough landing, and unnecessary roughness was called on Brock, awarding Demas a point.

In the third period, Brock erased a 5-2 Demas lead. Brock started bottom and picked up an escape point. He was then awarded a point after consecutive stalling warnings on Demas. In the final moments, Brock scored a takedown to tie the match, but Thomas was able to gain a go-ahead escape point before the two moved out of bounds.

Daton Fix was dominant in his first Bedlam dual. Fix, a redshirt freshman, defeated Anthony Madrigal at 133 with a 20-5 technical fall. Fix, from Sand Springs, was living in the moment in his first Bedlam. After his match Fix stood tall and hyped up the Gallagher-Iba crowd.

“He’s a kid from 40 minutes from here,” Smith said. “He grew up around Oklahoma State. Guys like Daton, they’ve been waiting for that first Bedlam wrestling dual. They’ve been thinking about it for a long time. It’s good to see him get in it then have the success that they wanted. It’s just one moment in time for him, buts it’s special. It’s special for him.”