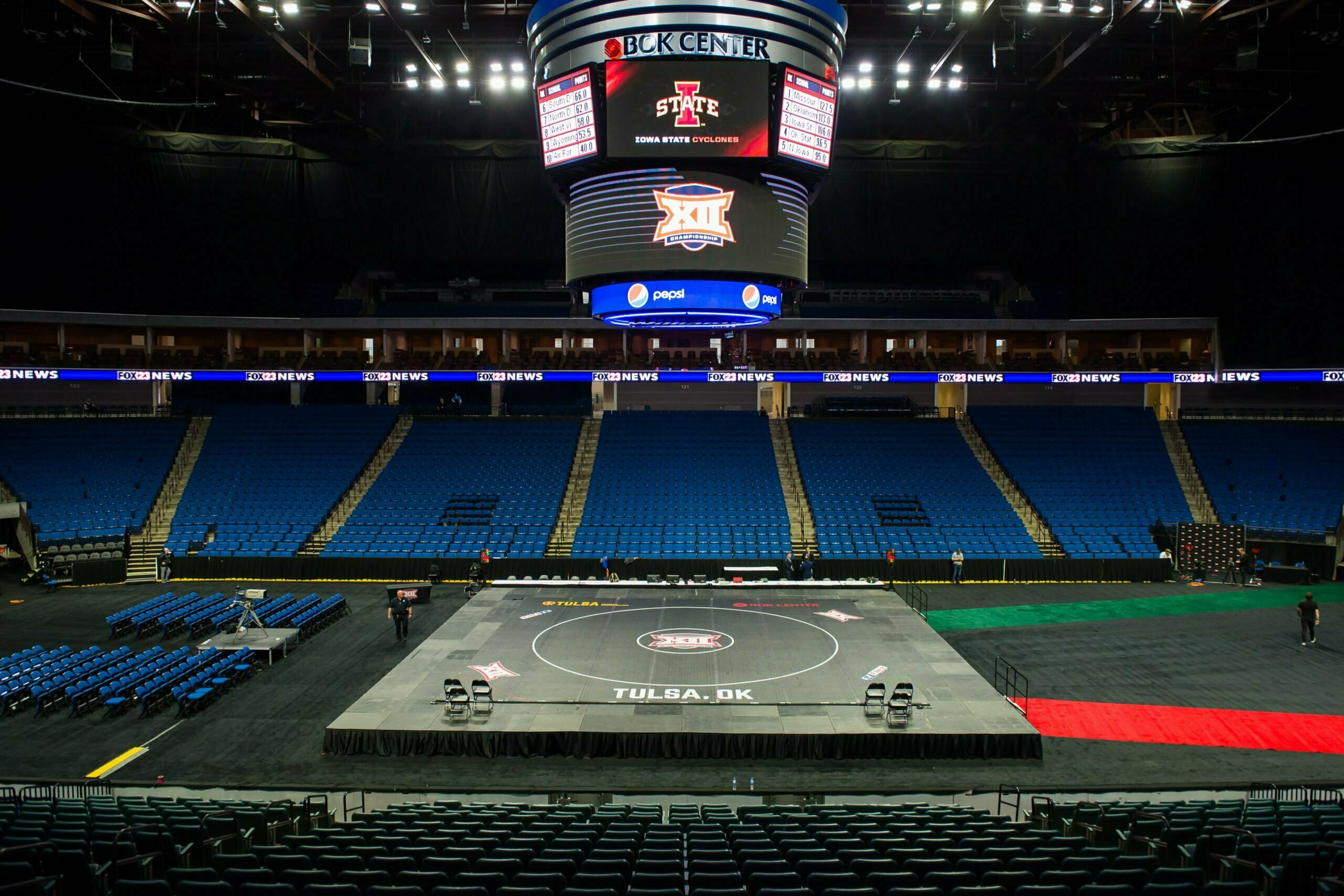 TULSA — The streak is over.

Oklahoma State had won nine straight Big 12 championships entering this weekend, but a slew of injuries saw the Cowboys finish fourth Saturday on the BOK Center. Missouri, who reentered the Big 12 in wrestling this season, won the event scoring 131.5 points.

“There’s more wrestling left,” OSU coach John Smith said. “We strive for All-Americans and national champions. I’d have loved to win the 10th one, but we didn’t. Just didn’t materialize, didn’t happen. Needed a little bit more. Needed a little bit of a break. But I thought we had a good tournament overall.”

The bout went into the second period scoreless, but that was after Mocco had a takedown taken off the board via a John Smith challenge. Mocco escaped to start the second and then took Plott down for real. Plott escaped to go into the third trailing 3-1.

After an early escape in the third, Plott trailed 3-2. From there, Plott shot and shot and shot. His work was rewarded with about 15 seconds to go, as he scored a takedown on the edge of the mat and milked out the rest of the clock to win his first Big 12 title.

“Just keep wrestling,” Plott said of his mindset late in the match. “Score the next point — that’s kind of been my mantra the past couple weeks, regardless of the circumstance. The first takedown, I’ll be honest, I thought he had a takedown, but regardless, I was gonna wrestle him hard. I was gonna look to score the next point. I think I would’ve got the same outcome.”

Daton Fix won his third Big 12 title in as many tries, beating Northern Iowa’s Kyle Biscoglia 6-2. Fix scored a takedown right off the whistle and led 4-1 after the first period. Fix was critical of his low score, saying Biscoglia was, “sitting on his knees and grabbing [Fix’s] wrist.”

It was an expected placement for Fix, who has his sights set on his elusive first national championship.

“My mindset is the same pretty much any tournament I go into,” Fix said. “I go out there to dominate and get my hand raised every time I go out there. The only thing that might be a little bit different is I get to play a new role. I’m not gonna go in as the No. 1 seed, more than likely. That means I get to be the underdog. That’s something I haven’t gotten to do in a long time. It’s exciting for me.”

Kaden Gfeller had a low-scoring match at 149, but defeated OU’s Willie McDougald 2-1. Both wrestlers scored on an escape, and Gfeller’s match-winning point came from a stall call. Gfeller pressured McDougald throughout the match, and McDougald took one to many steps backward in the third period, resulting in the point.

Gfeller, a redshirt senior from Heritage Hall, has had a winding road to his second Big 12 title. He won his first conference crown as a redshirt freshman in 2019. He competed in one tournament the next season and was injured last season. He is also an expecting father. Gfeller announced after the match that he and his girlfriend are expecting a girl next month.

Luke Surber nearly shocked the world in the final match of the tournament. Already making a Cinderella run from the seventh seed to the finals, Surber had top-seeded Wyatt Hendrickson in a cradle not long after the match started. But Hendrickson fought free and went on to dominate remainder of the match to win 16-6.

Surber has had to grow into a heavyweight throughout the year. Smith guessed that Hendrickson was 25 pounds bigger than Surber.

Despite the loss, it was a heck of a weekend for Surber heading into the national tournament.

Earlier in the day, OSU 125-pounder Trevor Mastrogiovanni put together a pair of entertaining matches en route to his third-place finish. Hobbled with an ankle injury, Mastrogiovanni scored a sudden-victory takedown against Utah Valley’s Taylor Lamont in the consolation semifinals to advance to the third-place match against OU’s Joey Prata.

Mastrogiovanni trailed Prata 1-0 entering the third period. With the bad ankle, Mastrogiovanni chose to start the period in neutral, which was against his corner’s wishes. After the match, Mastrogiovanni said he acted like he didn’t see his coaches clearly pointing toward the mat. It ended up paying off. Mastrogiovanni got a late takedown and scored back points to win 4-1.

“I’ve wrestled him, that’s the third time, and he knows I’m hurt,” Mastrogiovanni said. “So, he hangs right over and rips that ankle out.”

Dakota Geer had an up-and-down morning session, falling to OU’s Keegen in the consolation semis, pushing Geer to the fifth-place match. In that match, Geer found himself trailing DJ Parker 8-0. Geer stormed back, though. He scored a late takedown and had four near fall points to edge out a 13-10 win.

Geer needs an at-large bid to get into the NCAA Tournament. Smith said Geer ought to be a shoe-in. Former All-Americans Wyatt Sheets and Travis Wittlake also need at-large bids to make it to nationals, but those are less certain after the pair, both injured, didn’t place in Tulsa.

“In [12]-team tournament, it’s hard to win a tournament when three of your weights struggle to score,” Smith said. “That’s the difference, really. But, that’s something I thought could happen from a standpoint of where Wittlake was and the weight and the size and the competition at 197 for Gavin. You gotta score in 10 weights in a [12]-team tournament.”