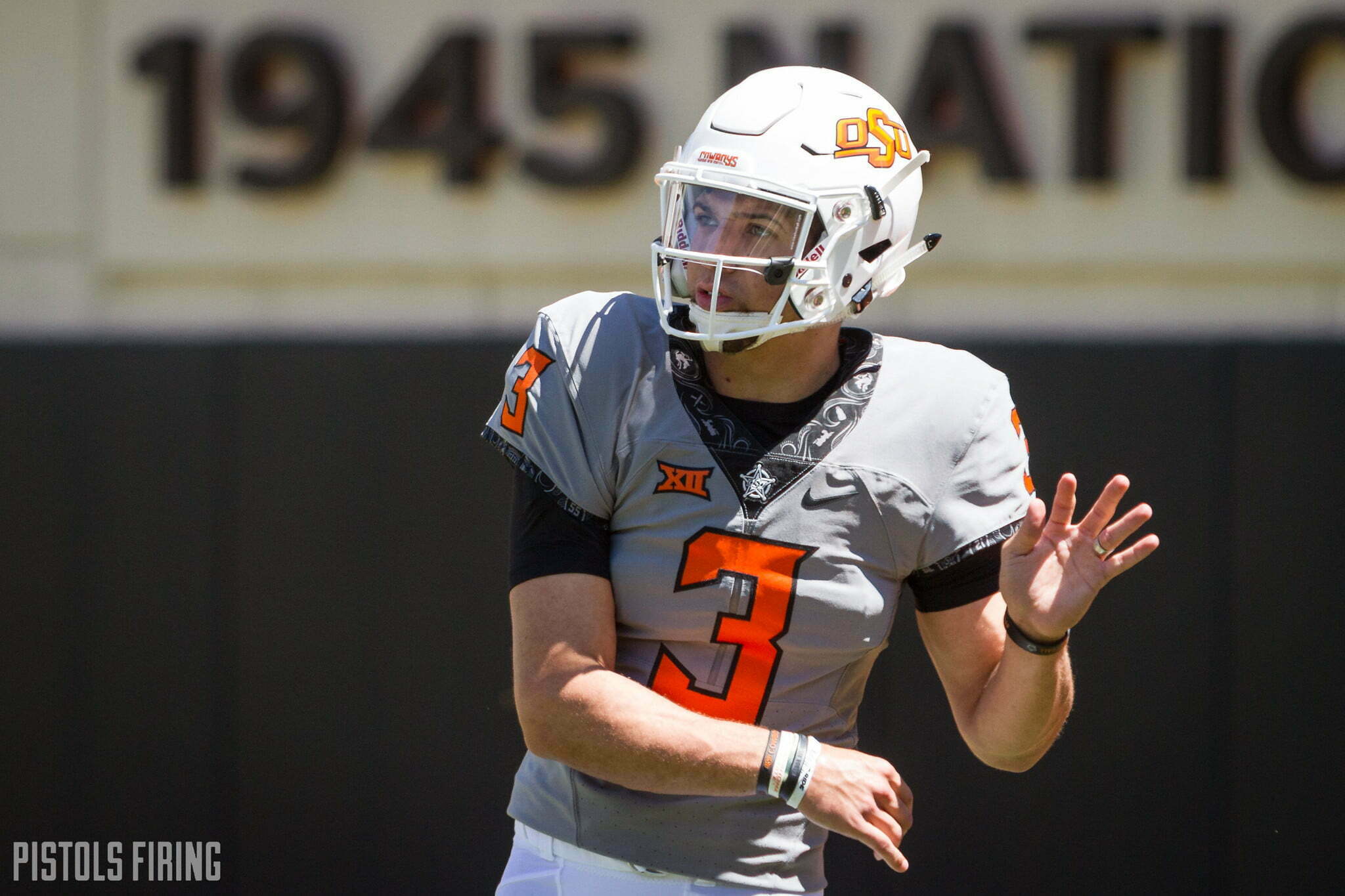 The spring game is behind us and we’ve got one foot into the doldrums that is college football’s summer offseason. That means it’s the perfect time to really dig in with our optimistic expectations, unfounded predictions — and head-scratching quandaries — for what will be a huge season for Oklahoma State football, and for Mike Gundy.

Here are three things that I’m excited for, plus one thing that concerns me, about this upcoming football season.

When that spring game/practice thingy ended, neither of OSU’s top two quarterbacks had taken a step ahead of the other in terms of reps or in terms of status, at least publicly.

One of two things are true. Either a) Mike Gundy knows, or at least has a good idea, who his man will be but wants to play his cards close to the chest until at least until fall camp starts. Or b) the competition is, in fact, that close.

In either case, I think Gundy has handled everything exactly as he should have thus far — again, at least publicly. There’s little benefit in showing your hand in April. You might as well let the competition continue through the summer lest you give one of the two (Sanders) a reason to look to the transfer portal.

Mike Gundy was QB1 in Stillwater for four years. Since him, only two Cowboys have led the team in passing at least three seasons: Tone Jones who captained OSU through the valley that was the mid-90s (and was the most intercepted quarterback in school history), and Mason Rudolph, who led the team to three straight 10-win finishes. I’m not saying we have a Tone Jones in this competition, but rather pointing out the rare opportunity OSU might have in Sanders.

The former Mr. Texas Football holds the advantage in upside and owns the eligibility needed to grow into that type multi-year starter. Dru Brown, however good he is — and he might be the right play for 2019 as far as I know — has the eligibility to be a second-straight lame duck QB in Stillwater.

My take, and it’s not an original one, is that you go with the upside and the possibility for a two- or possibly three-year leader of your team.

The renaissance that has taken place at OSU’s running back position should not go unmentioned, and I don’t think that’s hyperbole. There was a time when the Tailback U sign in Stillwater was tattered, torn with a faded 1980s font. Fans clamored for just someone who could make plays out of the backfield.

I distinctly remember a conversation where I berated my bored wife with the prospects and backstory of an incoming Chris Carson and how he could help turn things around. The results weren’t that drastic behind a water-thin O-line, but Carson turned out to be pretty good.

Justice Hill did the heavy lifting in that renaissance and it just continues with Chuba Hubbard who is set to take the Big 12 by storm. Add in the likes of Deondrick Glass and Dezmon Jackson who offer some intriguing upside to an already deep and talented backfield, and there is a lot to get you giddy if you’re John Wozniak.

The Pokes are set at each starting cornerback spot with A.J. Green and Rodarius Williams each returning off of 26 consecutive starts. Promising safeties, Malcom Rodriguez and Jarrick Bernard came out of 2018, their fiery baptism, with their first 10 and nine starts, respectively, and should be solidified as starters.

A defense whose strength was in the front end last year, will be the opposite this next fall. It will be interesting to see how Jim Knowles relies on the back end while he replaces all starters along his defensive line. There are pieces to work with like Colorado transfer Israel Antwine and the likes of Mike Scott and Brock Martin, but plenty of questions. But I’m excited to see how aggressive he gets with a salty secondary.

There are plenty of concerns if you are Mike Gundy heading into the summer. Those three above-mentioned high notes even come with their own worries. But my overall concern for this group is not the talent level at linebacker or who emerges as the No. 2 wideout behind Tylan Wallace.

The 2018 iteration of OSU football showed a lack of leadership, discipline and self control more times than not which resulted in maybe the most inconsistent OSU team I can remember covering or following. Gundy-coached teams used to be known for outplaying their talent and not beating themselves. The opposite was true for most of last season. In 2019, the Cowboys need to take a step forward in that regard.

Whether it’s the natural progression of reps and time that create leadership, or the additions to the coaching staff — or a change by Mike Gundy himself — this team will not live up to whatever potential it has without a shift in attitude and accountability.