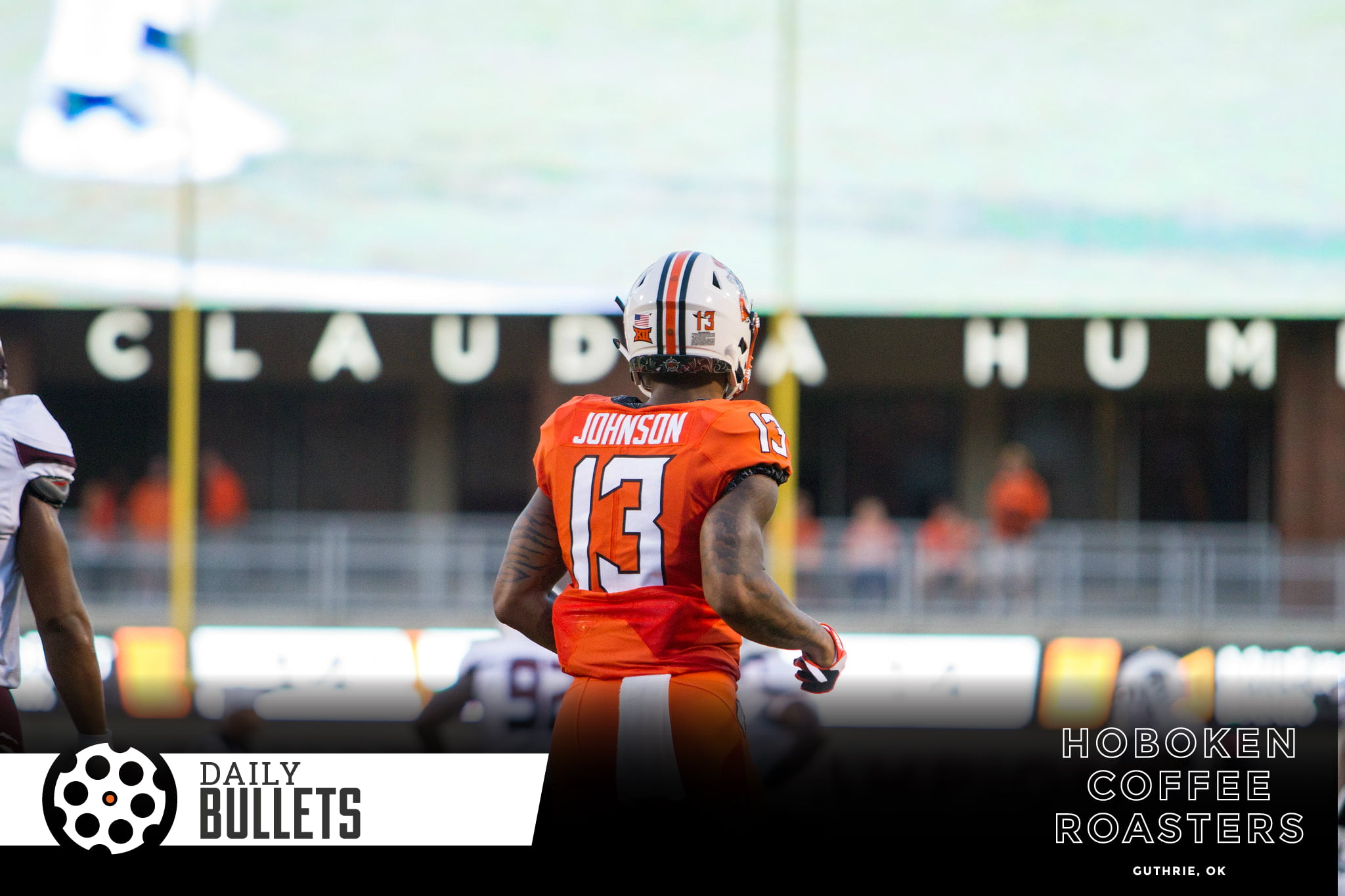 • Bill Haisten had a starting left tackle projection that surprised me.

A lot can happen between now and late August, when OSU prepares for the opener against an Oregon State squad that last season was 2-10, but an educated guess on the current OSU line starters would have (Bryce) Bray at left tackle, senior Marcus Keyes at left guard, senior Johnny Wilson at center, junior Ry Schneider at right guard and junior Teven Jenkins at right tackle. [TulsaWorld]

A former walk-on slotted in at guard and a redshirt freshman at left tackle were interesting takes. But after Dylan Galloway started five games at left tackle last year, that was a really surprising projection.

If we see guys like Bray fill up the depth chart from Josh Henson’s classes, we may start to view him as the offensive line version of Marcus Arroyo.

• One thing OSU will be eager to establish is a secondary playmaker behind Tylan Wallace.

Kasey Dunn has options as to who he wants to fill Tyron Johnson’s void.

There is C.J. Moore, Patrick McKaufman, Braydon Johnson, Jonathan Shepherd just to name a few. All will likely get a solid number of snaps in 2019, so who starts and who doesn’t might not matter all that much, but like with the quarterbacks, the public hasn’t seen too much of what those players can do. [PFB]

OSU has just been flooded with sure-handed playmakers (Dillon Stoner and Landon Wolf stand ready in the slot). But seeing who makes some plays in the open spring practice this weekend will be another piece to the puzzle, the first publicly visible piece.

• One of the most distinguishable qualities of a Mike Gundy coached-team is consistently above-average offenses.

“I’m learning more about him as we go along. He has a tough job. He’s at the one position where I actually know a little bit, so I can be verdy critical at times.

“It seems like it’s going to work out and be fine. We’ll know a lot more later, but we’ve had different personalities at that coaching position and had tremendous success for a long time. I don’t really see that changing.” [TulsaWorld]

Based on history, it’s not reasonable to assume that potentially starting a redshirt freshman or a new offensive coordinator will be able to change that.

"It's the neatest sports moment I've seen in my lifetime."

• Add NYC-area coaching jobs to your list of “If Boynton wins some games, ___ will come calling”.

Probably a smart move by Porter Moser. Not sure he would have been able to navigate NY and St. John’s effectively enough to win.

Here’s a name that hasn’t been brought up by anyone: Oklahoma State head coach Mike Boynton. He’s from Brooklyn, played at Bishop Loughlin.

• This surprised me that Isaac Likekele and Cam McGriff were so high in their categories – they’re serious producers in their roles.

A look at this season’s leaders of the Big 12! ? pic.twitter.com/aJnArOYFfW

• This faith-based read on how we look at the struggles of other’s vs. our own got me good yesterday