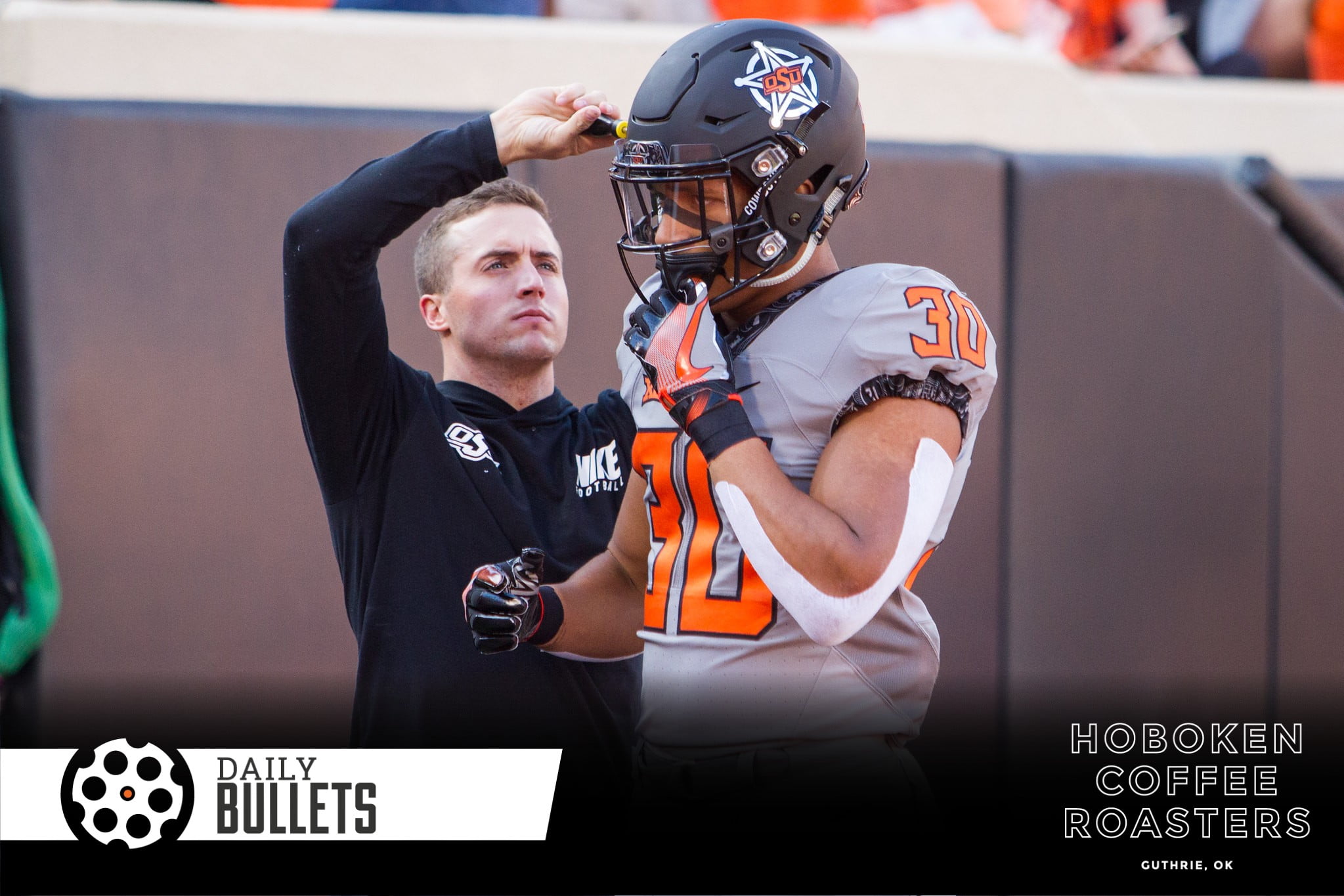 Pretty interesting to look at the OSU-A&M series – A&M leads with a 12-9 record since WWII.

• This was a great explanation of how a running back can put himself into contention (and specifically how Chuba Hubbard and Jonathan Taylor didn’t).

…If you are a running back or wide receiver limited to rushing and receiving, you’d better post crazy numbers to win one of those three votes or be crazy good at more than just one thing.

So here’s the thesis: when a quarterback can throw for thousands and run for 500-plus, it’s more impressive than a running back running for a bazillion yards… unless they can put an extra 500 yards on the stat sheet through the air.

• Gauging OSU’s chances in the Texas Bowl, this was a pretty valuable insight for the Cowboy offense.

I think (Spencer) Sanders is probably going to play — if he’s healthy, he should to get 2020 experience — but the inverse of what happened in Bedlam could be true in this game. A&M won’t have to worry as much about RB1 if (Chuba Hubbard) sits, and Sanders’ legs will be cut out from underneath him (metaphorically speaking). [PFB]

What an observation – the triumvirate of Sanders, Hubbard, and Tylan Wallace can function as a pair but will struggle to break 20 as a solo act.

• This is a solid explanation of why the Alamo Bowl took Texas (and the Camping World took Iowa State) over OSU regardless of finish order in the Big 12.

The Alamo Bowl had the first pick and they chose Texas. No should they have chosen Oklahoma State or Kansas State based on where they finished? Yes, but again $. Austin is an hour and a half away and San Antonio has a good size Texas fan base. The Camping World Bowl had the second pick and due to Iowa State’s traveling fan base when it comes to bowl games played a HUGE factor in their decision.

Then the Texas Bowl and Liberty Bowl had their choices between Kansas State and Oklahoma State, and both went with the closer choices in terms of traveling in hopes of getting more fans. I know it probably isn’t the “right” way but again, it’s all about making money and I don’t see the Big 12 stepping in to stop that. [HCS]

Recency plays in each year – Alamo wouldn’t consider Iowa State after having them last year and Camping World probably wasn’t fascinated by OSU after being with them two years ago.

The real travesty in all of this is that Texas and Texas A&M fans were robbed of a potential matchup, right? It’s hard to anticipate either team being much more than seven-win teams in the immediate future, so let’s just get on with it.

• Lane Kiffin’s take on analytics (and the press interaction with it) is fascinating. There’s more a chance OSU replaces Chuba Hubbard with Pat Jones or Robert Allen than Gundy following the analytics as described.

Ole Miss fans gets ready to embrace analytics in the Lane Kiffin era. Kiffin will use a company that'll provide weekly reports that'll help him make in game decisions based on data.

Me: Ready for another productive day, look out world!

Also me: What’s the deal with the Bermuda Triangle I need to read up on that right now