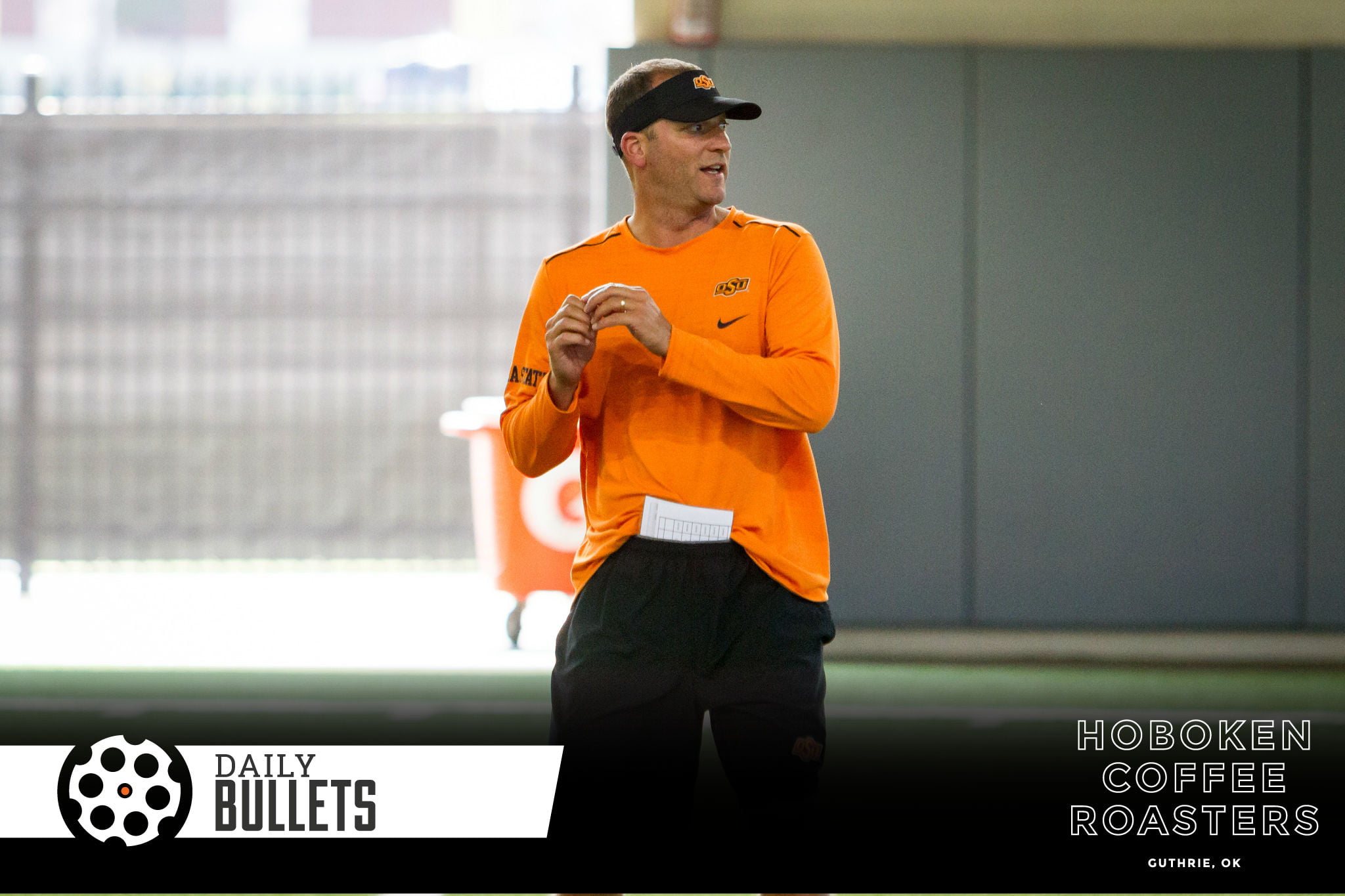 We’ve wrapped up the best few days of the year to be at the office (no competition for parking, few disruptions, etc.) in time for a little Corpus Christi appetizer before we lead into the Big 12 slate.

I agree that I don’t think Yurcich gets the OC job at Tennessee. I wouldn’t be stunned if he did — maybe waiting for OSU’s bowl game is what’s taking UT so long? — but it’s not a thing I expect to happen. I also don’t believe Yurcich will get any type of raise outside the bounds of what’s normal for assistants, especially considering he got a $200,000 bump earlier this year. [PFB]

That’s the thing – what’s everybody waiting on? The barrier I had thought through was the early signing day. For the massive opportunity Mike Gundy provided, do everything you can to help ensure a solid signing class then take your bow.

Now – I don’t think Tennessee with it’s not-established head coach and pressure cooker environment is that appealing unless you get a serious pay raise. But I think that $200k bump Porter mentioned keeps that from being an issue.

While Missouri’s offense might resemble some of those Oklahoma State faces in the Big 12 Conference, the Tiger defense is built more for the SEC’s style of football.

That applies to the secondary as well, where Missouri fields bigger, more physical defensive backs than the Cowboys might be used to.

“The Big 12, it’s usually smaller, quicker guys,” OSU sophomore receiver Dillon Stoner said. “The SEC, bigger guys, kind of a more bully technique on the line. That may be a little bit of an adjustment.” [NewsOK]

OSU consistently has an advantage in the passing game with upper echelon receiver play – no doubt it will be a shaping battle in the Liberty Bowl.

Replacing right guard Larry Williams, the sixth-year senior who also decided to bypass the bowl game, is a different story.

“We have some depth at offensive line,” Yurcich said. “Those guys are all capable of playing the guard position, and we expect all those guys to perform very well when called upon.” [NewsOK]

Something I’ve learned from the Tape Doesn’t Lie podcast is that from an offensive line perspective, the tackle and center are more difficult to replace than guards. I’m speaking from a seventh-grade level here but guards apparently don’t require the precise nature of footwork of their peers. Look for Noel or Richards to plug and play.

With that being said – it sounds like young gun Hunter Woodard could be a viable candidate per center Johnny Wilson.

Wilson said Woodard joined the first-string line at guard for some of the early practices as OSU mixed and matched and gave older players rest.

The Tuscola, Illinois, native who is listed at 6-foot-5, 295 pounds, impressed.

“I like watching him play,” Wilson said. “He brings it every time. He gets everyone fired up in inside drill, just going in there, attacking people. He’s a good kid. A good guy, I like him.”[TulsaWorld]

After facing the bRuTaL SEC East conference schedule, Vanderbilt gave up its most points of the season — 45 — to 6-6 Baylor.

Crazy how that happens.

Missouri isn’t a top 20 team, but at No. 24 they would fit the template pretty nicely. How great would that be if OSU goes 4-1 as an underdog against top 25 teams and 3-5 against everybody outside the top 25? [PFB]

So giant-killers may be a little strong but an identity around winning when you shouldn’t is something positive to hang your hat on.

However, these iTunes- or Netflix-style platforms aren’t likely to be good for publishers. On them, media outlets won’t be competing with one another to offer the best subscription package. Instead, their individual stories will battle it out for the audience’s favor in gladiatorial combat similar to that in which songs compete on iTunes or movies and shows compete on Netflix — or, for that matter, everything competes on the non-paywalled internet. [NiemanLabs]

We’ve obviously expressed no desire to put up paywalls but could you imagine an-iTunesy PFB? Buying a weekly album of PFB’s top-ten hits. Or maybe a PFB Prime subscription would get you recruiting news two days ahead of when it generally publishes.

“That first generation of direct-to-consumer successes started in that post-Recession moment,” says Leo Wang, CEO of Buffy, a one-year-old comforter startup. “They were about value, honesty, transparency of economics, and getting a good deal. All of that felt front-of-mind for consumers. Corporate America had swindled them.”

Startup minimalism, which became the dominant style of branding in the direct-to-consumer world, communicated this perfectly. It was optimal for digital consumption on small screens: stripped-down but warm, with lots of sans serif letters and white space. [Vox]

The article showed pictures of how design/consumers have trended after 2008-09, fascinating to see how things changed. A direct quote that hit me was about how “it was suddenly so uncool to look rich.”