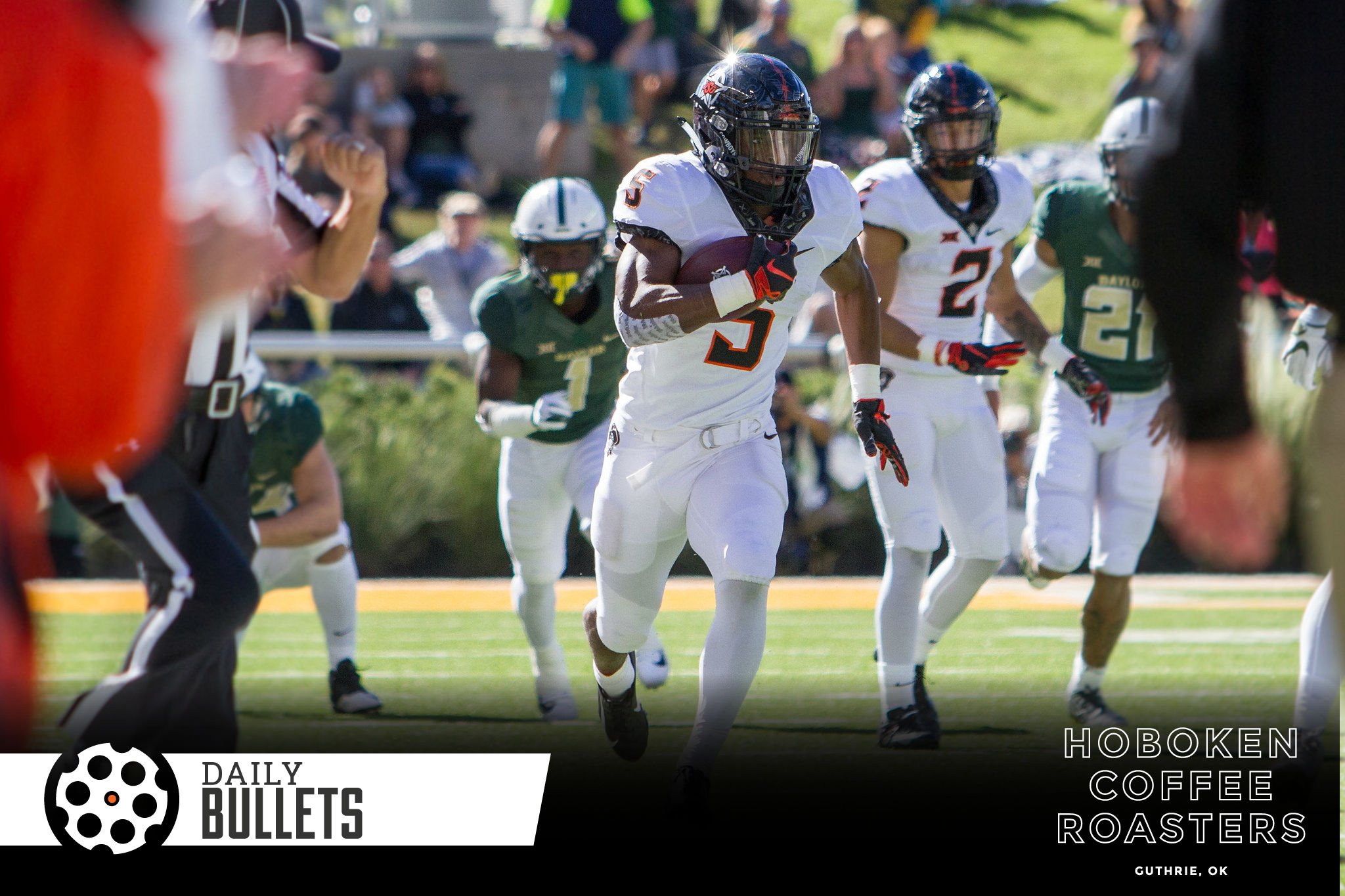 Here for the Previews

When bowl practices get rolling, some extra snaps will be headed towards the backup quarterbacks. The first real quarterback battle is looming for the first time since 2014.

This year’s fourth-teamer, Keondre Wudtee, and walk-on Shaun Taylor stand to fill out the depth chart heading into spring, with San Clemente (Calif.) High School senior Brendan Costello expected to sign in December and enroll in January as well.

With only the final one-third of bowl practices dedicated to preparing for the opponent, OSU will use the majority of work like additional spring practices, focusing on self-scouting, fundamentals and the future.

“We’ll try to incorporate the (second- and third-teamers), guys who may not play in the bowl game,” Yurcich said. “You get back to the basics and use it as developmental as much as you can.” [NewsOK]

Costello getting here early makes for an interesting wrinkle in the QB race. While it’s highly anticipated to be the coronation of Spencer Sanders, there are quite a few names getting thrown in a hat.

When you hear Justice Hill’s name considered nationally amongst his peers – it’s sort of downplayed. Does that make sense given Justice Hill’s tendency to play bigger than his frame?

It’s hard to think that a back who rushed for over 1,000 yards his true freshman season, and is currently coming off back-to-back 1,000-yard years going into his first draft eligible year is considered a David, of sorts, but it appears that is the case with Hill. If you look at the consensus running back rankings going into the 2018 college football season, you likely won’t see Hill’s name in the Top 5, sometimes not even the Top 10. I haven’t watched all of the draft eligible backs yet, and there is still a year to go, but I can tell you one thing.

In a great article looking at Hill’s draft-readiness, the possibility of sneaking into the top five running backs conversation seems more “likely” than “possible”.

Bill Snyder was legendary for more than his coaching exploits….Pretty impressive that Big 12 sends 70 percent to bowl games….Farewell to (Bill) Snyder Ball….Three Pokes made PFF’s All-Big 12 teams….Kansas appears to have found their offensive coordinator….Don’t forget to vote for the Piesman

My goodness. Those 49er DBs earned their game checks.

Man…. I would not want to take on Chris Carson full speed. pic.twitter.com/zAClhsJpja

The Amari Cooper trade is working out well for all kinds of Cowboys.

The @Raiders sneaking up on the Chiefs ? pic.twitter.com/45Yh8oEosk

This would be WAY more fun.

Still a fan of the 8-team playoff with P5 champs, best G5 and 2 at-large

1 Bama vs 8 Washington
4 Oklahoma vs 5 Georgia

Cowgirl sophomore had herself a week.

Go ahead and have yourself a week, Braxtin Miller! Our super sophomore is the Big 12 Player of the Week after racking up these three-game totals!
• 24.7 points per game
• 5.7 rebounds per game
• 5.3 assists per game
• 2.0 steals per game #okstate pic.twitter.com/VhrQ1BDFmI