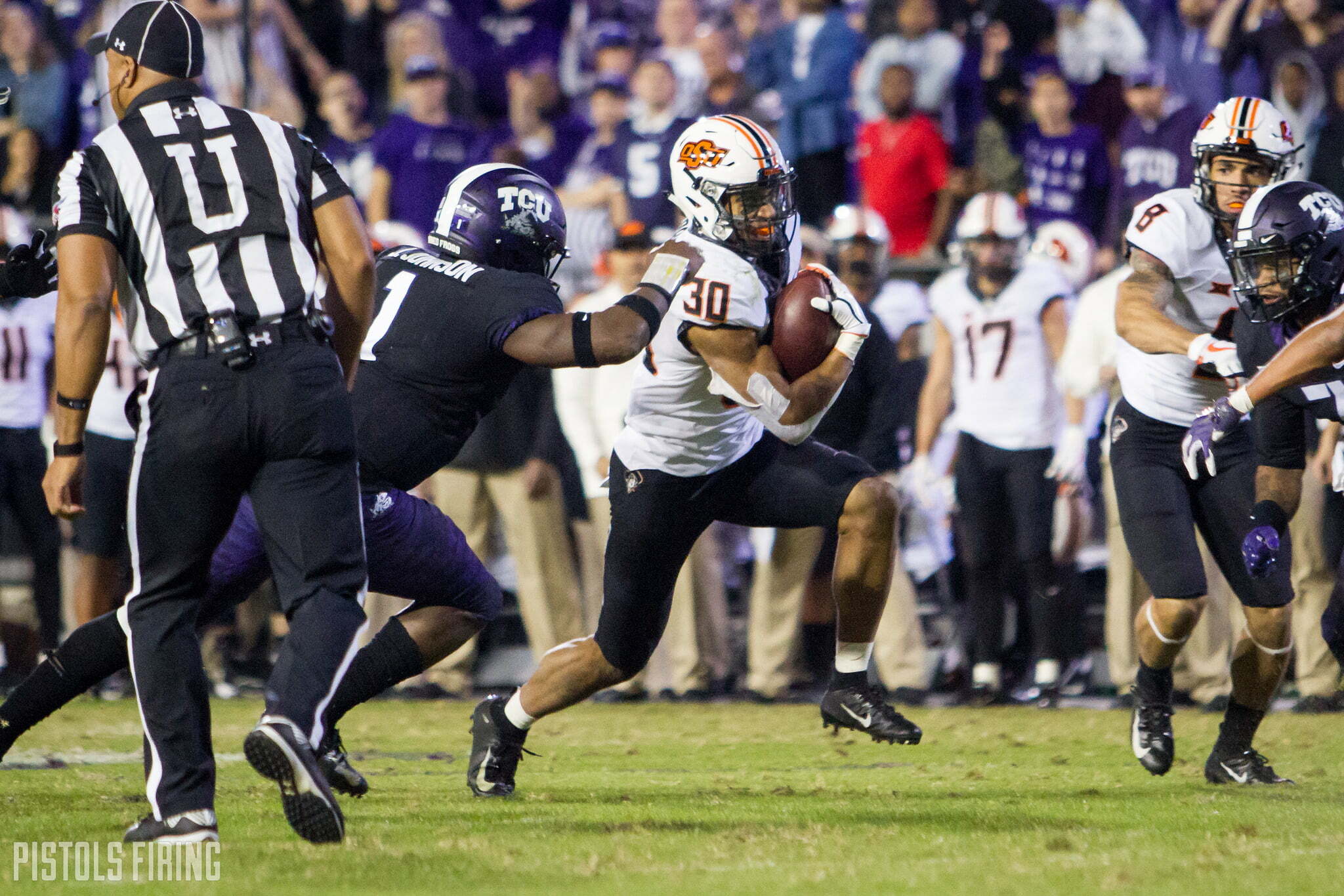 I started off the football recruiting reset series last week with the quarterback position. If you didn’t get a chance to read that post (or just didn’t want to, that’s fine … I understand), the recruiting resets will take a look at who is leaving, who will be returning and how the 2019 recruiting cycle is currently looking for Oklahoma State.

Now, let’s get to the next position grouping in this series… the running backs.

The sophomore running back announced a couple of weeks ago he would be transferring from Oklahoma State to another university at the conclusion of the season. This past weekend King provided everyone an update on this process by tweeting out his decision to transfer to Georgia Southern.

King recorded 622 yards on 142 attempts (4.4 yards per attempt) and 4 touchdowns on the ground during his two seasons with the Cowboys. In addition, he racked up 142 yards on 14 receptions along with 3 TDs in the receiving game.

The Fitzgerald, Georgia-product had gained a reputation as a power back for Oklahoma State due to his 211-pound frame and hard-hitting running style, as he showed this West Virginia defender during a 171 total yard and 2 touchdown performance his freshman year.

King saw dip in number of attempts (based on a per game basis since he played fewer games in 2018) and saw his production slide in terms of yards per attempt this season. However, his skill set will definitely missed at the running back spot next season.

In addition, Mike Gundy announced today via Twitter that Justice Hill would not be participating the bowl game to “pursue future endeavors.” Hill also tweeted out he plans to enter the draft.

Justice Hill and Larry Williams will not participate in the bowl game to pursue future endeavors. We wish both young men the best moving forward. #okstate

Although most expected this to happen, it still doesn’t change the fact that the Pokes will be losing a guy who’s rushed for 3,539 yards and 30 touchdowns, not to mention another 304 yards and 1 touchdown receiving, over his three year career in Stillwater. Hill was one of the most talented and productive running backs in Oklahoma State history and this won’t be an easy void to fill heading into next season.

His ability to make something out of nothing with his insane cutting ability, along with the speed to break long runs like the one shown below, will be greatly missed on this OSU offense.

As you can see, numbers-wise, the Pokes have a lot returning at the running back position. However, of the six guys listed above, only three are scholarship players. Additionally, the Cowboys only have two scholarship running backs who have seen game action at the college level in Chuba Hubbard and LD Brown.

That being said, these two guys have shown they are capable of handling the workload for the Pokes. Hubbard rushed for 595 yards on 106 attempts (5.6 yards per attempt) and 6 touchdowns and showed his ability as a receiver (aside from the dropped swing pass) in 2018. Additionally, although he didn’t have a great performance in Oklahoma State’s most recent game against TCU, Brown has accumulated 388 yards and 4 touchdowns on the ground in his two seasons with the Pokes.

Also, don’t sleep on the 6-0, 210-pound freshman (will be a redshirt freshman in 2019) Jahmyl Jeter. The former three-star prospect is a powerful runner and was the second heaviest running back on the roster in 2018 behind King. He rushed for 4,008 yards and 57 touchdowns in 41 games for William J. Brennan High School in San Antonio, and could be a solid short yardarge/goal line option for the Cowboys next season. Check out some of his high school highlights below.

The Cowboys don’t currently have a commitment in the 2019 class. I highly doubt they come away empty-handed, but at this point, there are a lot of questions marks on the recruiting trail for Mike Gundy and company.

Outside of Barlow, the Cowboys have shown interest in three-star Tulsa, Oklahoma-product Thomas Grayson.

Grayson was formerly committed to Nebraska but has since decommitted and has said he’s interested in playing at OSU. Grayson had a strong senior season at Booker T. Washington, racking up 1,063 yards (5.8 yards per carry) and 11 touchdowns on the ground over 10 games. Additionally, he helped lead his team to the 6A state semifinal game before losing to Stillwater. Grayson has the speed to get around the edge, but seems like he could also fill the gap left by J.D. King as an inside power runner. He will need to put on some weight in college, but he possesses a skill set I believe could benefit the Cowboys.

As I mentioned earlier, the Pokes haven’t yet offered Grayson, and if they don’t soon, he might end up committing elsewhere as he holds offers from schools such as Syracuse, Tennessee and Texas Tech.

Here are his highlights from his senior season.

When looking at the 2019 running backs Oklahoma State has offered, only two haven’t announced their commitments. The first, four-star Noah Cain, will be announcing in a little over two weeks, but all signs are pointing to either Texas or LSU. The second, Deondrick Glass, is currently the Pokes top target at this position.

The four-star back recorded 1,924 yards on 225 attempts (8.55 yards per attempt) and 30 touchdowns over an 11 game span in 2018 while leading his team to the Texas 6A regional semifinals. Glass is an extremely talented runner who has the strength to break tackles and the speed to get around the edge. Like Grayson, he could fill the hole as an inside power runner left by King, but has incredible athleticism and top-end speed which make him very capable of busting a big play every time he touches the football.

He currently has Alabama at the top of his list, although they may not have a spot for him, and recently picked up an offer from Miami. Many seem to think there are four teams left in consideration for Glass… Bama, Miami, Oklahoma State and Ohio State. It sounds like Glass may wait until the second signing period in February to make his final decision, so the Cowboys could potentially have a long wait until they hear from their top prospect. Hopefully the Pokes have a few more backup plans in their pocket if Glass decides to go elsewhere.

Below are Glass’ senior season highlights.