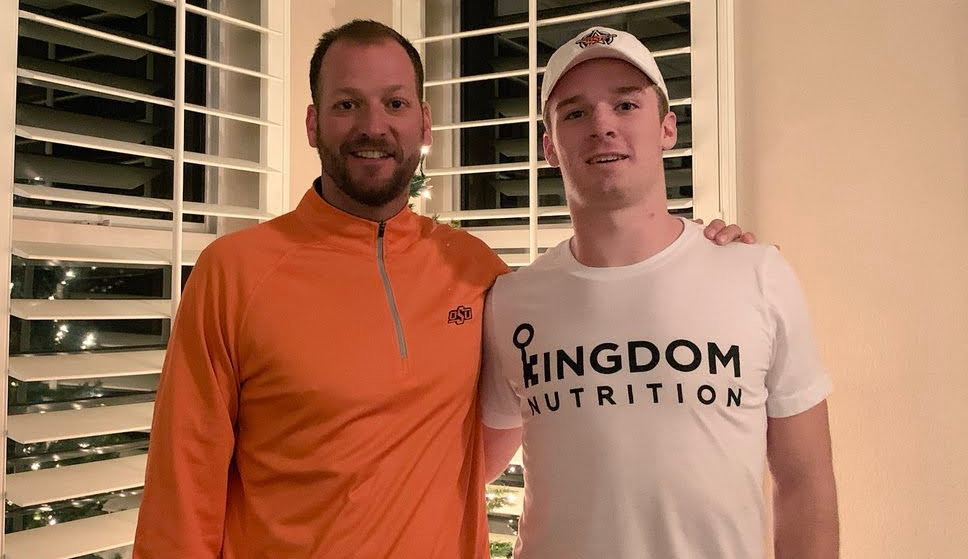 As the 2018 season winds down with only a bowl game left for Oklahoma State, I wanted to take a look at the quarterback position heading into next year. Below I will cover who is leaving, who will be returning and how the 2019 recruiting cycle has shaken out at this position out for the Cowboys.

After five years on campus, Corn Dog will lace them up one final time for the Pokes in the upcoming bowl game. He’s had his ups and downs at times this season, but after all of that, he is ranked in the top 10 in the nation in terms of passing yards per game, total passing yards and passing touchdowns this season. And no matter what your feelings are on TC, OSU will be starting someone new behind center in 2019.

What we know right now is that it definitely won’t be redshirt junior John Kolar, as he announced a few days ago that he will graduate and transfer at the end of this semester. It seems as though Kolar assumed he wouldn’t have much of a shot at the job next year and he’s decided to take his talents elsewhere.

As of now, it looks as though Hawaii graduate transfer Dru Brown will return to Stillwater, after redshirting this season, to play out his final year of eligibility. In addition, Spencer Sanders will also take a redshirt this year, and return next year with all four years of eligibility still available. These two are the most likely candidates to battle it out for the starting job in 2019, as most thought they had a shot to start for the Cowboys this season.

Outside of Brown and Sanders, the Cowboys return Keondre Wudtee, who will be a redshirt junior next season. Wudtee has seen a limited amount of action in his two seasons at OSU, but looks to be a cable backup for the two guys mentioned above. The last of the returning quarterbacks is walk-on Shaun Taylor, who was a true freshman this season and, along with Brown and Sanders, didn’t see any playing time.

The Cowboys currently have one quarterback commitment in the 2019 class, San Clemente, California-product Brendan Costello.

Costello’s senior season concluded a couple of weeks ago, as his team was knocked out of the playoffs in the second round. However, despite the early playoff exit, the dual-threat QB had a phenomenal final year racking up 2,328 passing yards, 658 rushing yards and 31 total touchdowns, while only throwing 5 interceptions over a 12-game span.

Costello committed to Oklahoma State in June over offers from Air Force, Army, Brown, Eastern Washington, Idaho State and UC Davis. He did pick up an offer from Georgia in early October which makes things interesting as we head into the early signing period in December. Costello seems firmly committed to the Pokes though and he visited Stillwater in late October for Homecoming.

If the three-star recruit does it end signing with OSU, which it seems likely he will, he is probably going to take a redshirt season next year with Brown and Sanders most likely taking the QB1 and QB2 spots. Also, even though Costello has been labeled as just a three-star by most recruiting services, I think he has shown from his play his senior year and the recent interest from teams like Georgia and UCLA, that he’s very capable of making an impact at the college level.

In addition, he had some pretty impressive testing results according to ESPN.com, such as a 4.68 40-yard dash time and a 38.4 inch vertical jump. I know most Cowboy fans have their eyes set on Spencer Sanders as they look down the road, but Costello could be a more than adequate successor at quarterback for Oklahoma State at some point.

Outside of Costello, the Cowboys only have one 2019 quarterback they’ve offered who isn’t already committed to another school. Four-star Louisiana-product Lance LeGendre decommited from Kansas in early August, but he seems to be interested in schools other than OSU. I think the Cowboys are fine with one QB commitment in this class as they already have four guys returning next year. Although, if things start heating up between Costello and Georgia, we could see some movement from Gundy and staff on the 2019 quarterback front.