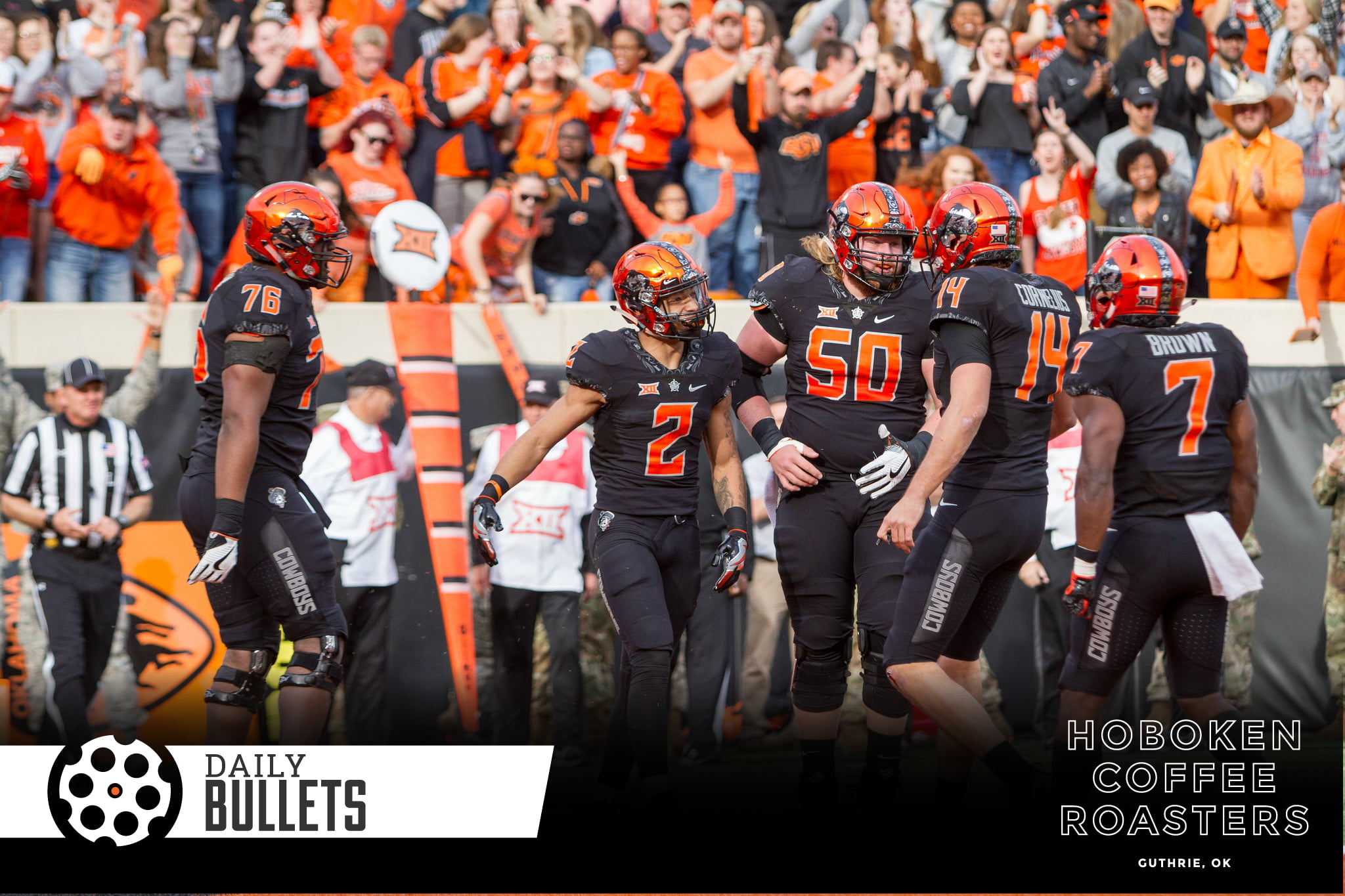 It’s been fun to devour the new offensive line coach material (part one, part two) and consider the shades of how the OSU offense could change this fall.

• I enjoyed Marshall’s thoughts on what it’s like to see a game at the Phog in Lawrence, KS.

It shocks me every time I see the building it holds 16,300 people. It doesn’t look as big as GIA, but as Nathan pointed out, it’s probably because it keeps going out instead of straight up.

It’s an amazing atmosphere. The stands are wooden. It reminds me of an old high school gym, obviously on a much larger scale and in the best way possible. The crowd was outstanding, as most of the 16,300 stayed to the final horn, singing the ominous Rock Chalk Jay Hawk in the final minute. It’s be like if a full GIA swayed and sang the Alma Mater while the game was still going. All the goosebumps. [PFB]

Known as one of the best offensive line coaches in the country, Dickey has tutored K-State offensive linemen to 22 All-Big 12 honors since his arrival – including 10 first-team accolades – and a pair of All-Americans in B.J. Finney (2014) and Dalton Risner (2017 and 2018). [GoPokes]

There will be plenty of thoughts on Dickey but here is a couple – the guy averaged 2.2 all-conference guys each year and an All-American nearly every other year from a similar vantage point (if not worse) on the recruiting totem pole. Alternatively, he did running the front of a Bill Snyder offense that’s decidedly different than what Oklahoma State runs.

I’d wager that the prior wins out over the latter.

• If you’re looking for a reason to be optimistic about Cowboy Basketball, here is some water for dry ground.

These are trying times for Boynton and the program, which was down to six available scholarship players as Duncan Demuth again sat out with an undisclosed injury. OSU’s issues are well-documented, with one player hitting the exit and three more booted for being bad actors. A team with limitations to begin with now faces long odds to win in a difficult league.

And yet, they battle on, refusing to surrender. And that’s a good sign — a good sign of the substance of the remaining players, ALL of whom will be back next season; and a strong sign that they’re all-in on Boynton, all-in on who he is and his leadership.

Help is coming, with a top-20 recruiting class on the way and the staff still chasing more talent. [GoPokes]

It’s absolutely essential for OSU to start signing guys that stay around and see the campus as upperclassmen. Boynton is clearly a character guy – bringing in some developmental pieces that are culture guys providing depth would go a long ways. That combined with his knack for blue-chip recruits.

More from #OKState coach Mike Boynton: "Whatever the thing is that people have that make them quit, I don’t possess it. So what we’ll do is we’ll keep working. We’ll keep fighting and keep trying to compete. Eventually we’ll have a breakthrough and our guys won’t look back."

• This look at the culture of late Eddie Sutton teams (via an interview with John Lucas III and Tony Allen) was fun to hear about. When you take away the distractions of the big city and get a bit more isolated, there’s an opportunity for some depth of a relationship.

Lucas looks back on his time at @OSUMBB.

• Fun comments here made by one of the more recent Pistol Petes.

Preston cherished every moment during his two years as Pistol Pete. Doing his first football game at JerryWorld when OSU played Florida State. Putting the head on Lee Corso before the Bedlam football game in 2015. Going to weddings. Being the surprise at birthday parties.

“Nothing beats bustin’ through a door and firin’ off that pistol when nobody knows you’re coming,” Preston said.

“The great thing is, you can laugh because nobody knows you’re laughing inside that head.” [NewsOK]

• This block from Zion Williamson on Saturday night as hard to believe even while seeing it.

This could be the most athletic thing I’ve ever seen pic.twitter.com/DjaSyNGykl

HE CALLED GAME FROM HALF COURT! ? #SCtop10 pic.twitter.com/xKQQbgSrRI

• When trying a new hobby, buy the cheap things first

• What the Thunder did to Houston on Saturday was wild – for me to enjoy basketball season I need one of OKC or OSU to play well.