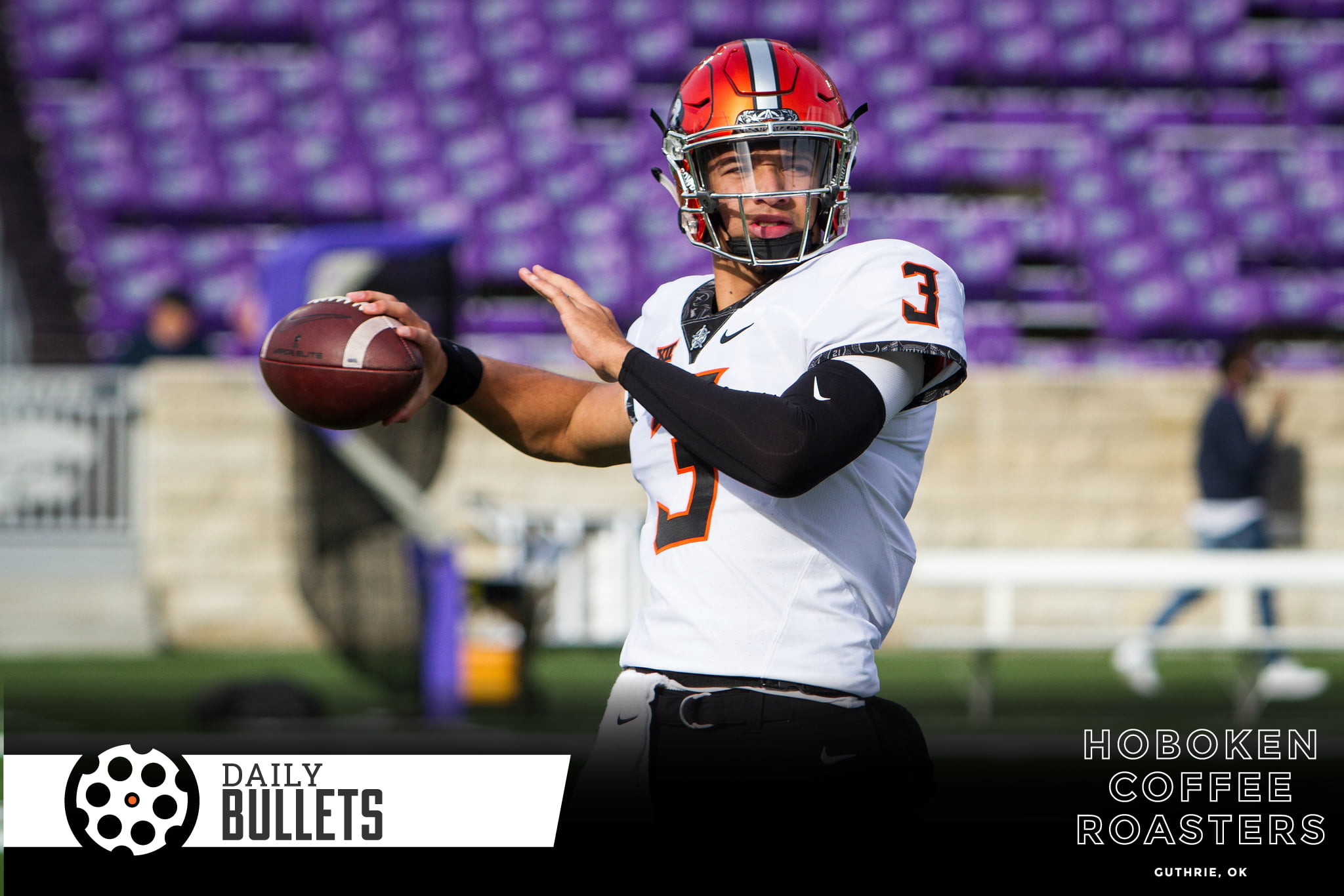 With this eight to ten games left, I’d love to see some wing dominance – give me a handful of 25, 30 point games from Cam McGriff, Lindy Waters or Curtis Jones and you can package some optimism to go with the next recruiting class.

• OSU hired Kansas State’s offensive line coach and a coordinator fond of running a quarterback in clever ways. I wonder where this is headed?

Gundy has talked about making the offense more physical in scheme and with the quarterback talent set of guys like Spencer Sanders, Dru Brown, and newly enrolled freshman Brendan Costello include more QB run game in the offense, something that Gleeson did really well last season for a 10-0 Princeton Ivy League Champion. John Lovett rushed 141 times for 894-yards, 6.3-yards per carry, and 13 touchdowns. Princeton, as a team, rushed for 295.5-yards a game. [GoPokes]

Would you be surprised if we ran Spencer Sanders 10 times a game for the first half of the season?

• Boone nails it here – Gundy could be swinging an off-season from a depressing “we lost two coaches to lateral moves” to improving the team.

But this might just be one of the most quietly successful offseasons Gundy’s had. Gleeson was out of left field — and he’ll need to validate he was worth the call up to the big leagues. But his brilliant playcalling should engender optimism in the lead-up to 2019, and Dickey’s experience as a co-OC/schemer should do the same. [PFB]

• After asking a friend what a big difference between Boynton teams and Ford teams are, he had this nugget: Mike Boynton found a center in year two.

The Oklahoma State Cowboys are dying for an inside presence. They’ve been hoping that could be Yor Anei, and he’s starting to show it. Going into the TCU game on Wednesday he had averaged 8.8 points per game in the past five games. Against TCU he put up a career-high 20 points. [HCS]

• I don’t love reading it but some football minds still need to be sold on the superior capabilities of Dallas Cowboy Blake Jarwin.

Unless you are really, really sold on that ridiculous Week 17 game being who Blake Jarwin really is, the Cowboys have a gaping need at the tight end position. The position had 88 targets in 2018, with exactly one touchdown to show for it before Jarwin’s three-score season finale. [PFF]

• Loved this weight loss story about Yor Anei and Kentrevious Jones from the weekend – the John Smith quote was all-time.

It was (John) Smith, considered one of the greatest wrestlers in American history. He had (Anei and Jones) wear sweatpants and trash bags and told them to sit in the team sauna before running laps.

“They lasted about six minutes in the steam room,” Smith recalled this week. “Not very long.” [NewsOK]

• Saw a great quote about Dabo Swinney and how he strategically built Clemson. Sign me up when that guy writes a book.

The upshot of all of this was that Dabo essentially assembled a Big 12-style program with coordinators from the Big 12 that had experience either executing that style (Morris) or defending it (Venables) and then combined those strategies with the resources of an SEC program, all within the comfortable confines of the ACC. [Football Study Hall]

• Good read on the new free agency in college football.

• Pro football isn’t over yet (for now)

• This commentary on the modern away message was pretty good