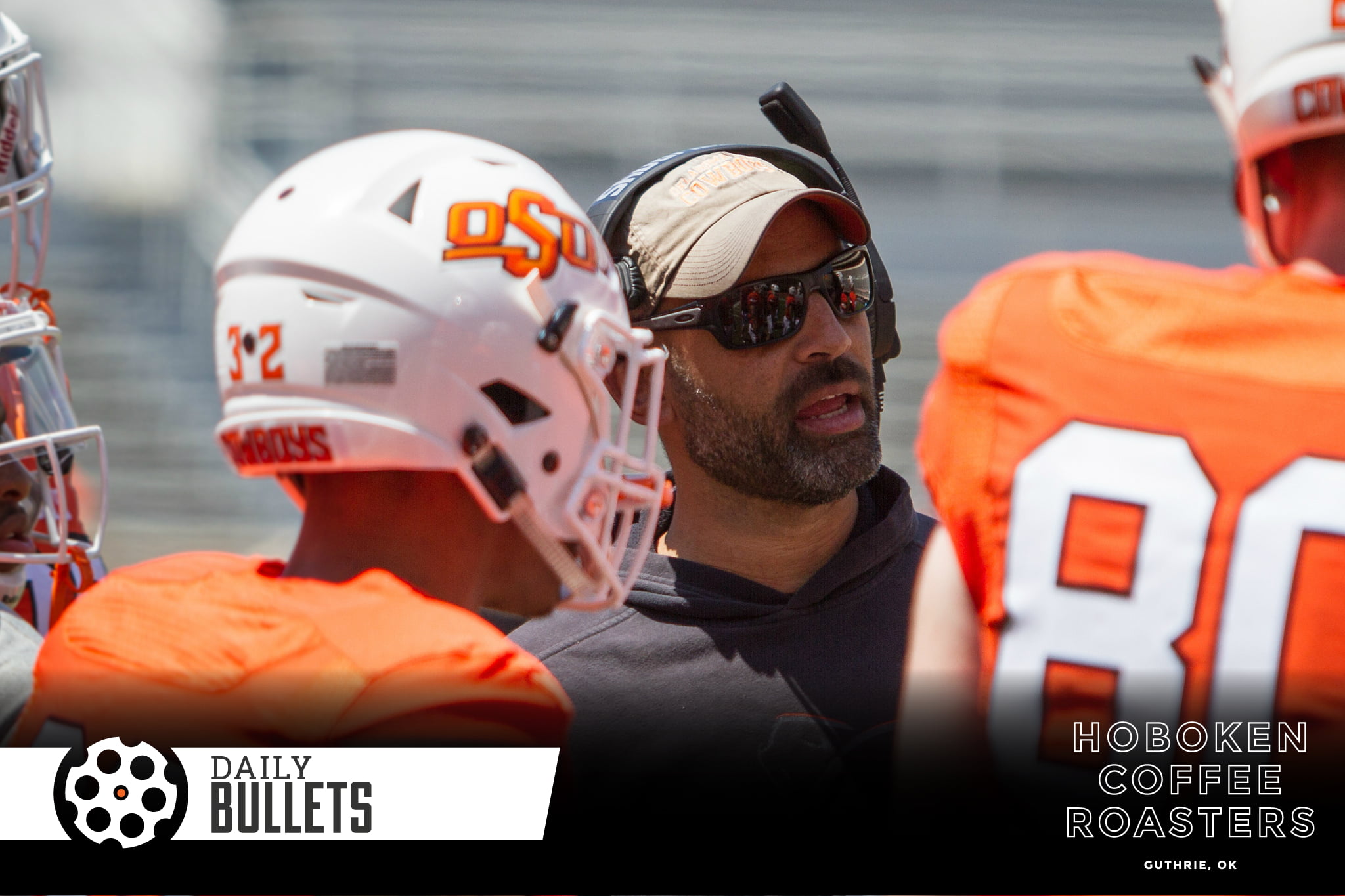 Happy Valentine’s Day – here are some OSU things I love: GIA pre-renovation, beating bluebloods at football for the first time in decades, this interview of Les Miles’ pre-Bedlam, and my son Sutton and his sweet orange-haired sister.

• Kasey Dunn appears to be sticking around
• Gundy’s continuity theory may not be optimal
• 2012 vs. 2018 football season

• Kasey Dunn appears to be safely nestled in Stillwater with reports leaking out that Oregon will be hiring the Utah State -> Texas Tech receivers coach.

Oregon’s wide receiver coaching vacancy has been open since Jan. 26 when Michael Johnson, who’d spent the previous two years in Eugene, took the same post at Mississippi State. By the sound of it, that job won’t be open for long, as FootballScoop has reported the Ducks have zeroed in on Texas Tech assistant Jovon Bouknight.

ICYMI – Cowboy receivers coach Kasey Dunn was rumored to of interviewed for the open position and appears to be out of the running for the job now.

• Cox tells it like it is when he points out Gundy’s “continuity theory” may not be optimal.

…Gundy opts for the safer, less-sexy hires over those who might be assumed to have more immediate success — but that also might get hired away sooner. Actually, that’s what he basically said in the quote above.

Is that necessarily a bad strategy? No. Level of hype does not always correlate with level of success (see Lane Kiffin’s head coaching career). But I do think playing it “safe” can limit your ceiling… [PFB]

I love this point. Another fair criticism the article brings to mind is this natural conclusion: if you’re the “best coach in the world to work for” (good life balance for the profession) then you should be able to retain coaches for longer than expected.

• With all of the cards played on 2018 Cowboy Football, the most appropriate comparison is drawn: the 2012 season.

Oklahoma State has been here before. The program was a bit less established, and Mike Gundy’s luxurious mullet was a little shorter, but six years ago, following the 2012 season, Oklahoma State found themselves in a strange spot. They were coming off a season that saw excellent offensive production despite the lack of elite quarterback play, paired just enough defensive struggles and offensive slip ups to keep the Cowboys hovering right around .500.

In 2012, that meant an 8-5 season that saw three quarterbacks toss more than 130 passes. In 2018, it meant 7-6, with Taylor Cornelius doing enough to survive, but not enough to win consistently. [LGG]

Loads of parallels when you compare the outcomes (2012 vs. 2018), the records and ceilings are similar but the quarterback situations couldn’t be more different with the 2012 triumvirate of Chelf, Walsh, and Lunt vs. riding Taylor Cornelius for the full ten furlongs.

• Revisiting Sunday’s hiring of Charlie Dickey and digging into his resume a bit more, he’s got quite a track record.

Under Dickey, two Kansas State offensive linemen went in the NFL draft. Dalton Risner will almost certainly become the third this year. Cody Whitehair went to the Chicago Bears in the second round in 2016. He has started 48 consecutive games and reached a Pro Bowl.

From 2011-18, Kansas State placed an offensive lineman on the All-Big 12 first team every year. [TulsaWorld]

With “worse” recruiting than OSU (K-State is below OSU most every year in recruiting), Dickey has been able to put together all-conference talent every year. I love hearing that.

• After a season with high turnover, Coach Mike Boynton was asked if the season changes how he approaches the future.

“Not necessarily, it’s changed that we actually have to be more aggressive recruiting now than maybe we thought we would, but we always recruit pretty aggressively anyways, so that helps,” coach Boynton said. “The other thing is I’ve learned a lot about how to manage crises. Probably the biggest takeaway is I think when I retire, I’m going to go into giving seminars on crisis management.” [GoPokes]

A commenter yesterday mentioned how overrecruiting could potentially impact current scholarship players, a good point. They could perceive the steady flow of offers (and commitments) as a threat or competition. Sign me up for Crises 101 with Prof. Boynton.

• I could read Berry Tramel talking about Shaq vs. Big Country all. Day. Long.

• These thoughts on time management and a different ultimate goal around it were good:

Good time management isn’t just about personal productivity. It is about shaping a life that is free from the tyranny of the deadline so that we are able to give ourselves away to others with our full presence, our full mental awareness, and our full joyful attention. [Theology Along the Way]