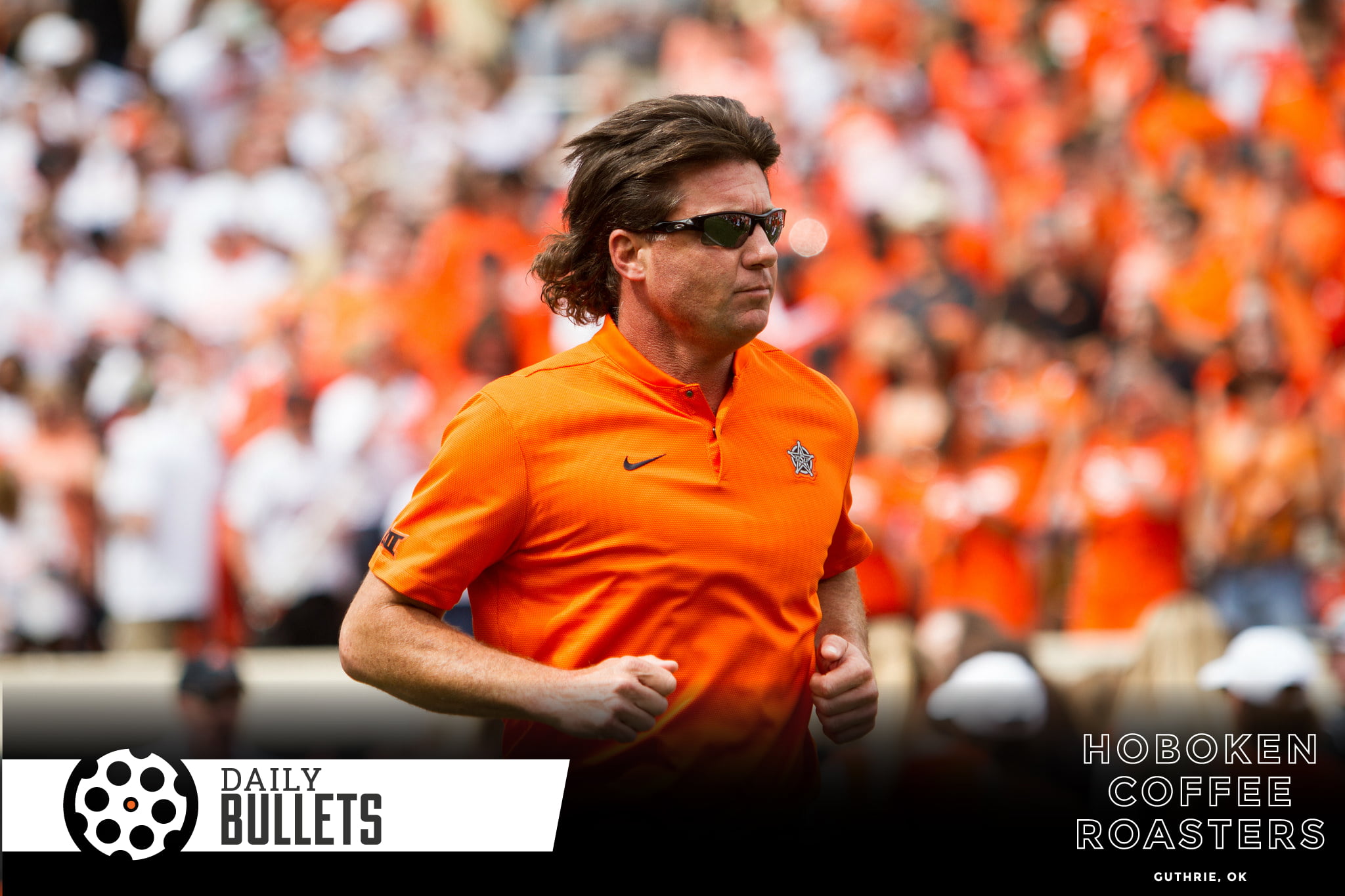 • Jenni Carlson had a smart take on Mike Gundy’s hiring of Sean Gleeson, the precedent it confirms and the resulting effect.

In the future, it may be difficult for Gundy to keep offensive assistants who aspire to be coordinators or head coaches. That path just doesn’t appear possible at OSU.

You have to think that’s why (Kasey) Dunn might be looking. He might not want to leave OSU, but he has long dreamed of being a head coach. To climb that ladder, he probably needs to be a coordinator. If he doesn’t believe he can do that in Stillwater, he’ll eventually have to go elsewhere.

Now, word is Dunn will soon get a big pay bump and a new title. Something like associate head coach. Gundy is probably taking money saved when Yurcich left and Gleeson was hired and giving it to Dunn. [NewsOK]

The “word” that Dunn would get a nice bump is a new concept – that Gundy would find a way to keep a position coach is unique (and ideal). As much as Gundy loves continuity, it’s surprising that a title-bump/promotion hasn’t either worked or at least been known.

• While the Pokes took home the W with an 8-3 win, UA-Little Rock pulled an interesting pitching move (at least for a non-baseball guy like me).

The Trojans (0-4) had an interesting pitching strategy Wednesday. In the eight innings Little Rock played on defense, the Trojans used nine pitchers. No OSU batter faced the same pitcher twice, as Little Rock brought a new pitcher out at the start of every inning.

McKinley Moore and Jose Torres tied to face the most OSU batters of any of Little Rock’s pitchers, each facing only six. As a staff, the nine-man unit allowed seven hits, walked 11 batters and struck out 10.

“On (Wednesdays) that tends to happen,” Carter said. “They had a bunch of new guys, so it was a lot of guys we didn’t know anything about, so it’s just stick to your approach and don’t let the pitcher dictate what you’re gonna do.” [PFB]

• Is it a good thing that the OSU->Pac 12 idea fell through?

Who knows what’s going to happen over the next 10 years as we enter the next round of big contracts from the big boy networks, but I genuinely like where the Big 12 is positioned, especially when you juxtapose it with the Pac-12.

Sure, you might not get the fancy San Francisco offices or your own Official Television Network, but you’re also not trying to sell a tenth of your business for a preposterous price. The Big 12 has many, many issues, but money and flexibility are not among them. [PFB]

Earning more money than the Pac 12 while getting to keep your third-tier TV rights is a pretty sweet gig but it’s a double-edged sword. In other, more egalitarian leagues, the mid- and l0wer-tier schools get a bite of the big boys’ pie when they split third tier rights among the league. But not taking a bite out of that pie keeps the brands happy where they’re at too.

• Cowboy great Mickey Tettleton was recently praised as he entered the Oklahoma Sports Hall of Fame.

And the most impressive number in the careers of both Tettleton and Moore is that 14. Those are long major league careers.

“Lot of really good stuff,” Tettleton said. “The All-Star Games and the Silver Sluggers and all that was great, but just to be able to stay there that long is what I’m most proud of.” [NewsOK]

• The fiscal issues and opportunities that exist in the Pac-12 are wild.

• College football trade-ideas are a lot of fun.