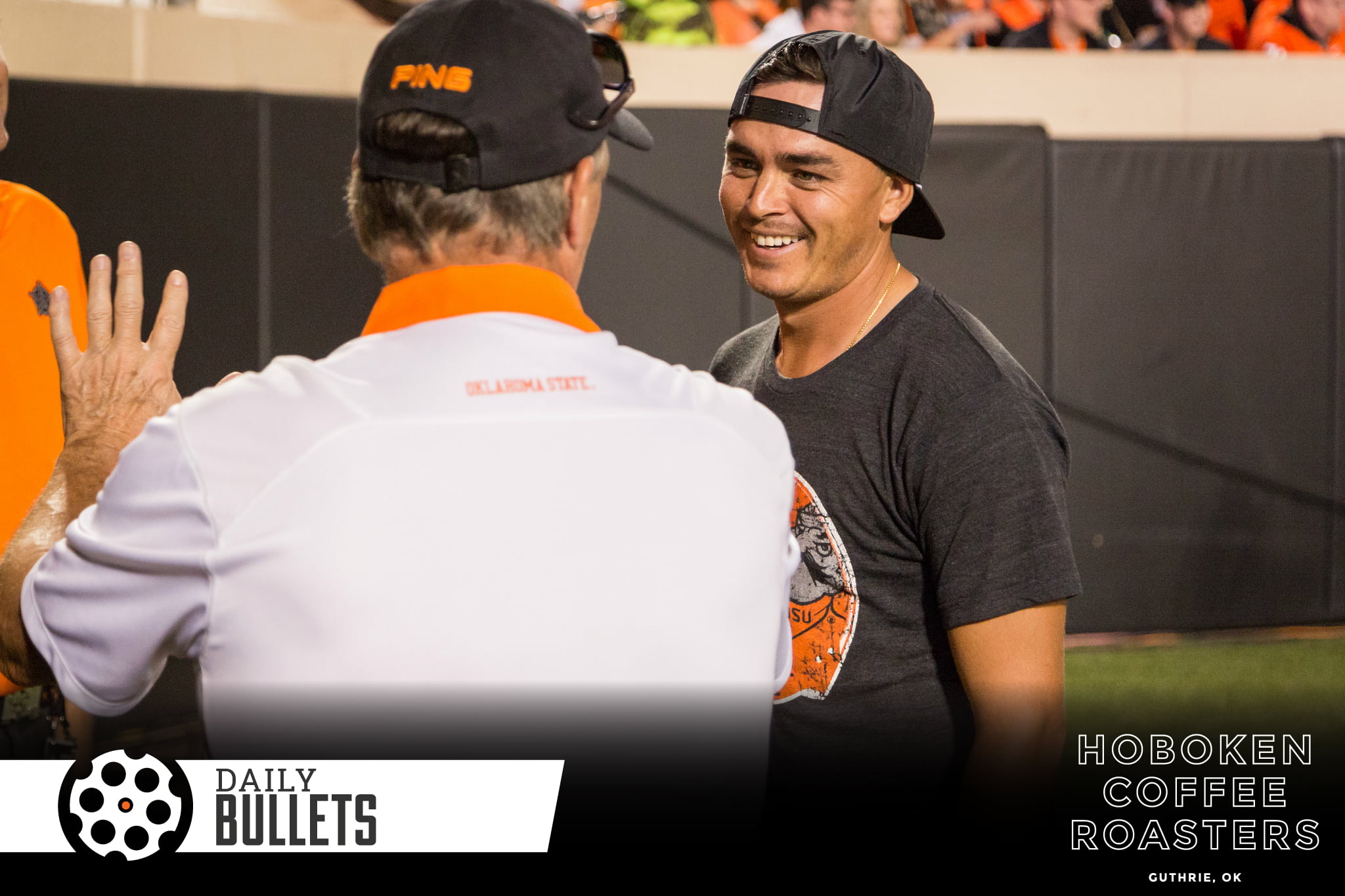 Happy Super Bowl Sunday, or as it’s called in my home, “The Day Where Rickie Fowler Wins His Fifth PGA Tour Event And I Don’t Even Watch The Super Bowl” Sunday. Also, I will be on Morning Drive on Golf Channel on Monday (and all week) discussing whatever happens with Fowler. There will be memes. Can’t wait!

• Scott Wright talked to a lot of folks in and around Sean Gleeson and got some great stuff for this Sunday story. Here’s a clip from his old boss (and now Brown’s head coach), James Perry.

“He’s gonna fully immerse his family in the OSU world. He’s one of those guys who totally bought into Princeton, was a huge part of the campus life with his family, and he’ll do the same at Oklahoma State. He’s that kind of guy.”

Gleeson’s family-first passion translates to how he approaches coaching his players as well. The execution is different in football and fatherhood, but the principles remain similar. [NewsOK]

That’s the kind of thing that plays well in any college town, but maybe especially so in a place like Stillwater, where OSU is the biggest (and often only) show in town.

Sorry, Twitter trolls and basement bloggers, Fowler is playing too well to choke Sunday. He’s yet to shoot anything worse than 65 this week as he’s made just two bogeys and climbed to 20 under, the best score of his Tour career through 54 holes. He’s leading the field in strokes gained: tee to green, ranking third off the tee and fourth on approach, and sits second in strokes gained: putting. [Golf Channel]

I do think Fowler’s going to win on Sunday (because it’s difficult to blow a four-stroke lead), but there are some pretty interesting trends converging in the desert this weekend. Either way, the end of the Waste Management Oklahoma State Open will be good fun.

Rickie Fowler is the 8th player to lead by 4 or more strokes through 54 holes in a Phoenix Open at TPC Scottsdale. Six of the previous seven went on to win (Spencer Levin, 6-shot lead in 2012).

This is the seventh 54-hole lead of @RickieFowler's career, and he’s converted just one of the previous six into a victory. https://t.co/M8uJ9qgb1o

• OSU is out here offering five-star QBs two classes away.

The No. 1 quarterback in the 2021 recruiting class Preston Stone, a five-star prospect from Dallas area Parish Episcopal School, announced an offer Thursday night from Oklahoma State. The Cowboys are one of many officially in contention to land his services, along with Alabama, Auburn, Arizona State, Tennessee, Florida and others. In the Big 12, OSU joins Texas Tech, TCU, Baylor and Texas among those who have offered. [PFB]

Do the Pokes have a shot? No. Even if Tom Herman publicly slanders the Stone family and says Preston would be better off playing in College Station? Also no. But I do love OSU taking swings here. And who knows, crazier things have happened.

• RA talked to Sean Gleeson’s old coach at Princeton, and this quote should surprise nobody.

“Sean is the most organized person that I’ve ever been around and I used a different term when I spoke to Coach Gundy when he asked about him,” laughed Surace. “Sean’s game plans are so organized, his game plans we are going to run out of this personnel group, 10 plays on run and 10 plays on pass and there is no variation. He is incredibly detailed and demanding and he will insist on his players that you can’t win if you are turning the ball over. We turned it over just six times in 10 games last season. [Go Pokes]

Nobody loves ball security more than Mike Gundy, and it has become clear that between the innovation, the love of football and the protection of the rock, why Gleeson got hired to come to Stillwater.

• Hoops caught it going both ways on Saturday against Kansas State.

Entering Saturday, Kansas State gave up an average of 58.8 points a game, which is the fourth-best in the country, so OSU’s 57 points fell in line with that. With that said, K-State averaged 64.6 points a game, which ranks 330th in the country, and the 75 the Wildcats hung on OSU was the most since Kansas State scored 77 on Lehigh on Nov. 24. The Wildcats shot 55.2 percent from 3-point range, the team’s highest 3-point percentage of the season. [PFB]

This is what this season was always going to look like in some ways, but I think a lot of it has been exacerbated by losing so many guys so early in the year. There will be one more game that excites everyone at some point over the final month, but I’m honestly kind of looking forward to looking forward to 2019-20.

• RA has some good info from Cowboy Day over the weekend right here.

• In case you missed it on Twitter — we had a team dinner in OKC on Friday that ended at Top Golf. You can roast our swings below.

Crafting your Daily Bullets by morning, smacking the tar out of golf balls by night. @SRMandeville pic.twitter.com/hPTtQ00kFY

Believe it or not, this guy edits our #content … @KyleCoxPFB pic.twitter.com/uGxFKaPt7L

Fortunately, Mrs. Pistols has all the #TourSauce in the family. pic.twitter.com/IbvsDlwWea

• This Jason Fried pod is the best one I listened to this week.

• Awareness is easy, action is the hard part.