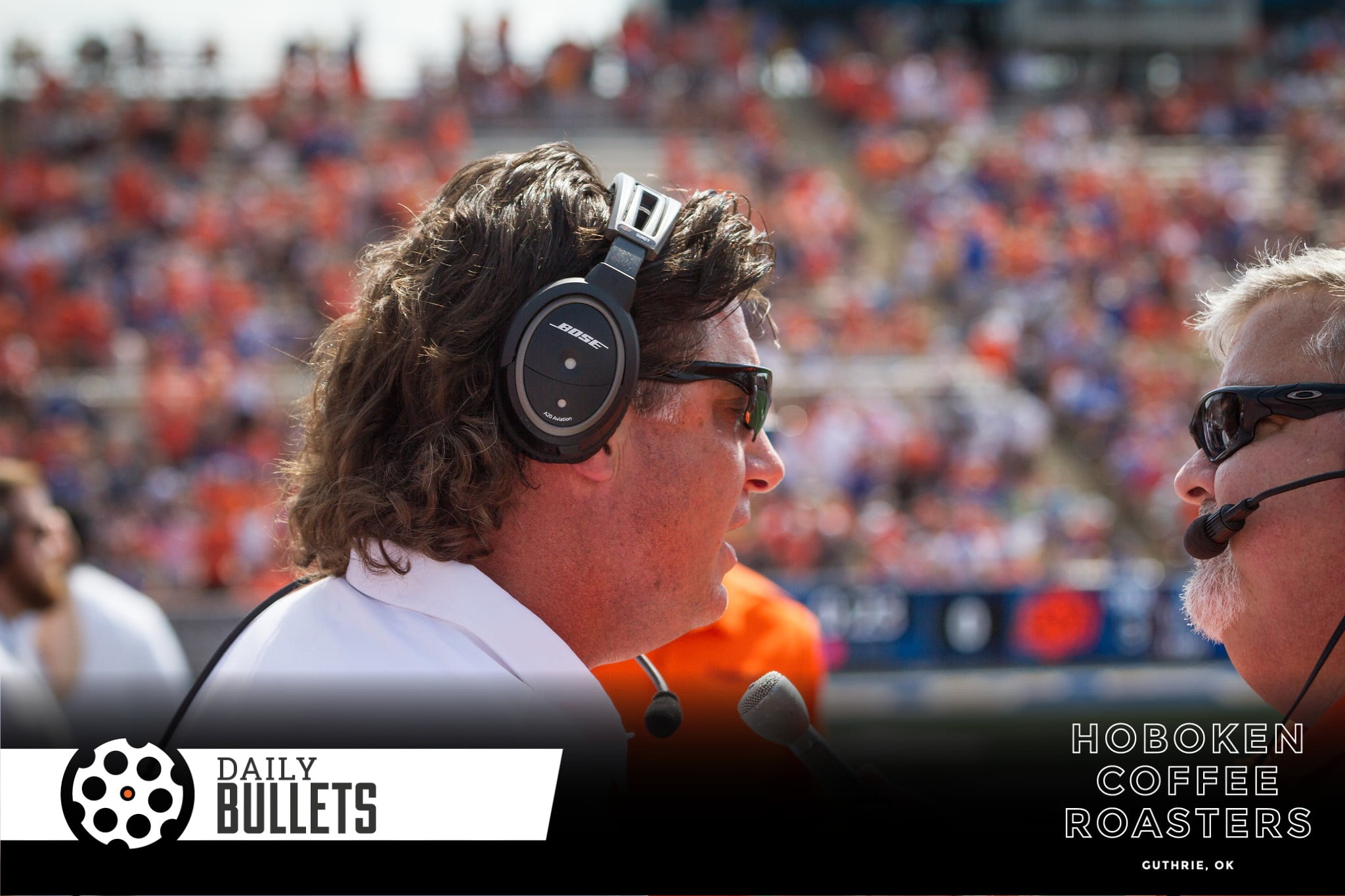 I love watching Gundy on the national title game coverage. The last time he did it, he hired one of his co-host’s coordinators.

• I loved this question in the reader mailbag – what football program does Cowboy Basketball most compare to?

All that to say, I think the CFB comp here is — are you ready for this — Texas.

Elite in the late 1990s and early 2000s with an all-time great coach and haven’t been good — even though they’ve wanted badly to be good — since then. They wandered a lot leading up to Mack Brown, and you have to go back to the 1950s and 60s with Darrel Royal to find a time of sustained success. That’s a mildly different timeline than OSU hoops, but the concept still applies.

The part that doesn’t work is GIA vs. DKR Stadium. DKR is not very good. I’ve been there several times, and it just kind of stinks. GIA does not stink (as we all know). But other than that, I stand by my comp (and hope that it changes in the decade to come).

I couldn’t agree more. Texas claims tradition but it looks like it’s more about a select few key coaches winning surrounded by mediocrity in both directions (before and after).

What separates the Texas Football/Cowboy Basketballs from the lower tiers is that it’s the kind of place where the resources and tradition exists for a great coach to win at.

• Reportedly, Mississippi State hired a firm to watch social media for the response to Mike Leach being hired (and candidates being leaked) – all I can think about is Mike Gundy saying this:

• Dumping (bowl related item) on coaches after the game is an awesome idea. I need mulleted-Mike Gundy having sugar dumped on him in New Orleans next January to Def Leppard.

This bowl season, instead of Gatorade baths, we had: A Frosted Flakes bath, a smoothie dump, a Cheez-It bath and a french fry dump.

I wanted to find out how they all came about. Here is the story you didn't know you needed: https://t.co/tla0NeNCiz pic.twitter.com/98hoKwGyKs

• Daton Fix going for the Olympics is so crazy to me. I get it when young gymnasts go but it’s hard to imagine the things he’s chewing on as a 21-year-old wrestler

• Charlie Dickey recruited the highest-ranked interior lineman in the league and coached the third-best… Josh Henson leaving appears to be a win for the Pokes.

• OSU (and other Big 12 opponents) stand to benefit from Alex Grinch landing that WSU job. I think Nick Rolovich (Hawaii) gets it though.

Would expect #Oklahoma defensive coordinator Alex Grinch to get strong consideration for #WSU job. Served as DC there under Mike Leach and dramatically improved the unit.

• Ed Orgeron and what he means to Cajuns is CFB at it’s best
• How to be a transparent leader without oversharing
• Finished the “Voyage of the Dawn Treader” – v. fun

Loved that the memories of the 168 were honored nationally last night. The Russ tribute was awesome too.

The @okcthunder debut their 25th anniversary of the federal building bombing uniform tonight. Here are each of the elements explained. pic.twitter.com/qxtCcJOeYD