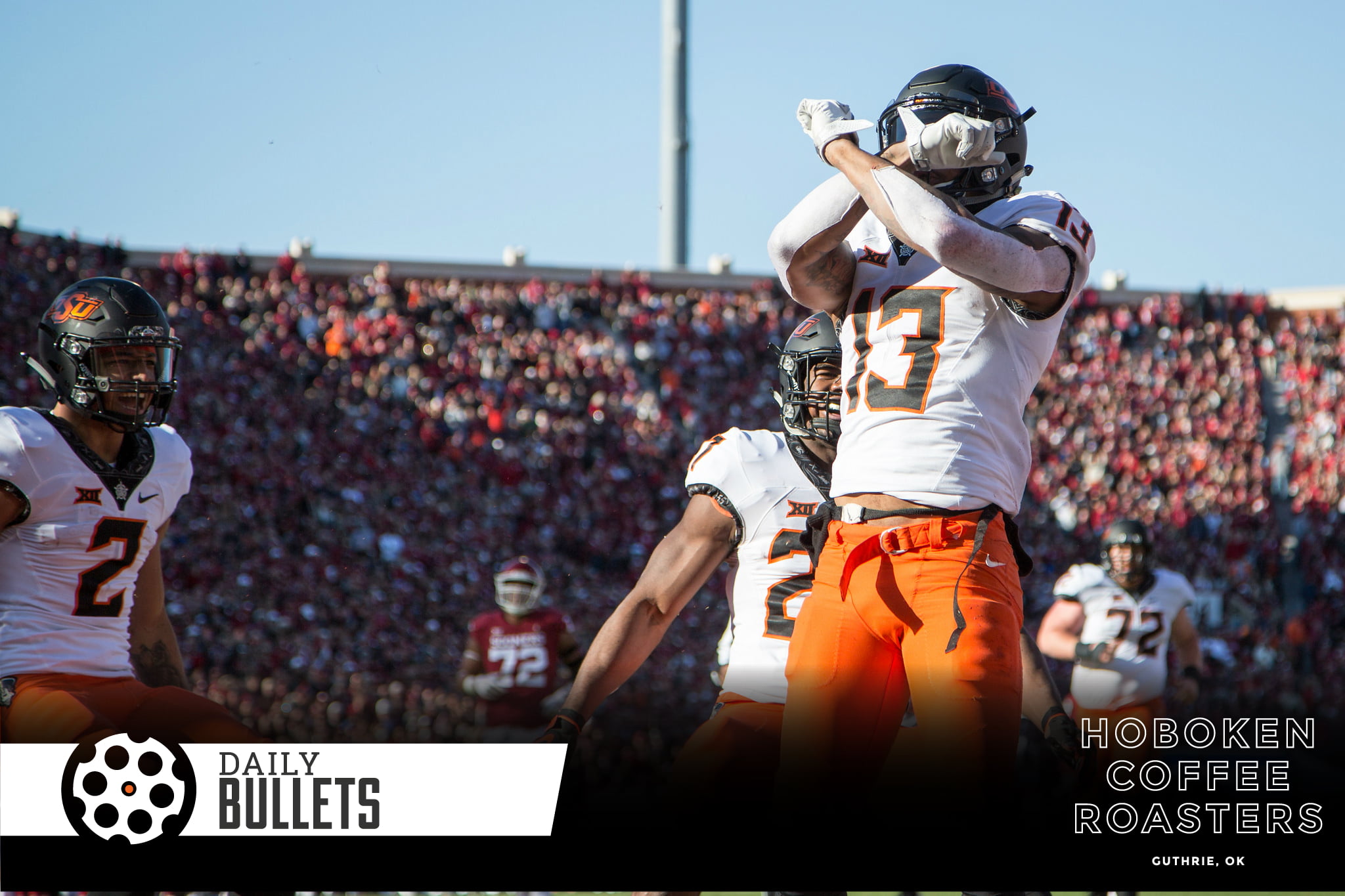 You can look at life in one of two ways: Deondrick Glass signed because Alabama changed their phone number or Glass signed with OSU because he wants to play in a great offense. Let’s be Glass-liked-Stillwater fans today.

•  The missing piece for this Cowboy Basketball team looks to be some surefire, slump-busting offense.

When OSU was getting open looks from 3 or still making contested, long-range jumpers, everything looked great for the Cowboys, but then Baylor switched to a 1-3-1 zone (a bold move from coach Scott Drew, considering the success both teams were having from 3), and it stagnated the Pokes’ sets.

The Cowboys failed to make a field goal from 8:30 remaining until 59 seconds were left, that’s 7 minutes and 31 seconds where the only points OSU scored were four free throws. [PFB]

Credit to Boynton and Co. they’ve done a good job of building some solid looks into the offense (and putting Curtis Jones, Lindy Waters and Dziagwa in good spots) but sometimes you have to have a guy, an undeniable talent that can go out and get a bucket.

• Let’s talk Tyron-Replacements. It’s unfair to ask for someone else who can make you miss in a phone booth but there’s got to be a good option for a second go-to-guy after Tylan Wallace. I like Patrick McKaufman.

At 6-6 and over 200 pounds, McKaufman is a matchup nightmare for EVERYONE and he’s got the skills/speed to wreak havoc on opposing defenses. With another year in the system (despite the OC change), he should be ready to compete immediately for a starter’s reps. [PFB]

Outside of not being a four-star prospect, this smells too much like a Marcel Ateman-situation. Coming back from an injury (and out of a juco) would lead to more maturity to go with a big receiver capable of possession-extending catches.

And while the receivers’ room is stacked high with talent, there’s not an established second (outside) receiver.

Oklahoma State did not establish a third outside receiver in 2018 behind Johnson and Tylan Wallace. Patrick McKaufman, LC Greenwood, C.J. Moore and Jonathan Shepherd figure to be among the options to replace Johnson. [TulsaWorld]

• There are two reasonable schools of thought on the hiring of the next offensive coordinator: Henson with Bodie Reeder as QBs versus who the heck knows.

Todd Monken is now hitched to Baker Mayfield, so he’s off the table, and was never really a serious possibility anyway. Monken is an NFL man now, and isn’t likely to look back.

Henson or Dunn – or both – could get the job. But if not them, who?

So is this the waiting period so it doesn't look like Gundy was simply waiting for Monken to take another job prior to finding someone else? I'd say 48 hours is sufficient. Has Henson already moved offices and Reeder already rented a Uhaul? Is there a Uhaul tracking service?

• Boone looks at the final resting point of the Cowboys’ 2019 football recruiting class – and where it could end up.

The most likely final piece remains out on the board in Soni Fonua, a defensive end at the junior college ranks. He’s set to visit in two weeks, and his commitment would likely push OSU into the 30s in the recruiting rankings. [PFB]

The class currently sits at No. 40 and fifth in the Big 12 – getting into the 30s would be a good look for the Pokes.

• Now this is politics I can get behind:

May have just yelled “State!” at the end of the state song at the governor’s inauguration. #gopokes

• Tramel looks back on the long history of Big 12/Big 8 quarterbacks and their (lack of) playoff success.

• Embracing “digital nutrition”, put briefly as what you consume digitally and how it affects you, was a really interesting concept. I’ve been chewing on these faith-based “rules of life”, looking hard at the weekly habit of curating media and boy is that a tough one.

• This on “intellectual humility” seemed like a good thing if it spread in 2019: understanding your perspective may be wrong and hearing other thoughts.

Instead, it’s a method of thinking. It’s about entertaining the possibility that you may be wrong and being open to learning from the experience of others. Intellectual humility is about being actively curious about your blind spots. One illustration is in the ideal of the scientific method, where a scientist actively works against her own hypothesis, attempting to rule out any other alternative explanations for a phenomenon before settling on a conclusion. It’s about asking: What am I missing here? [Vox]

I think a lot about confirmation bias and how that’s impacting my view. It’s not convenient but it’s been worthwhile.

• Finished a faith-based read by a solid author on pursuing excellence as opposed to success – lots of nuggets in there but a bit of a language barrier in the 80’s lingo.