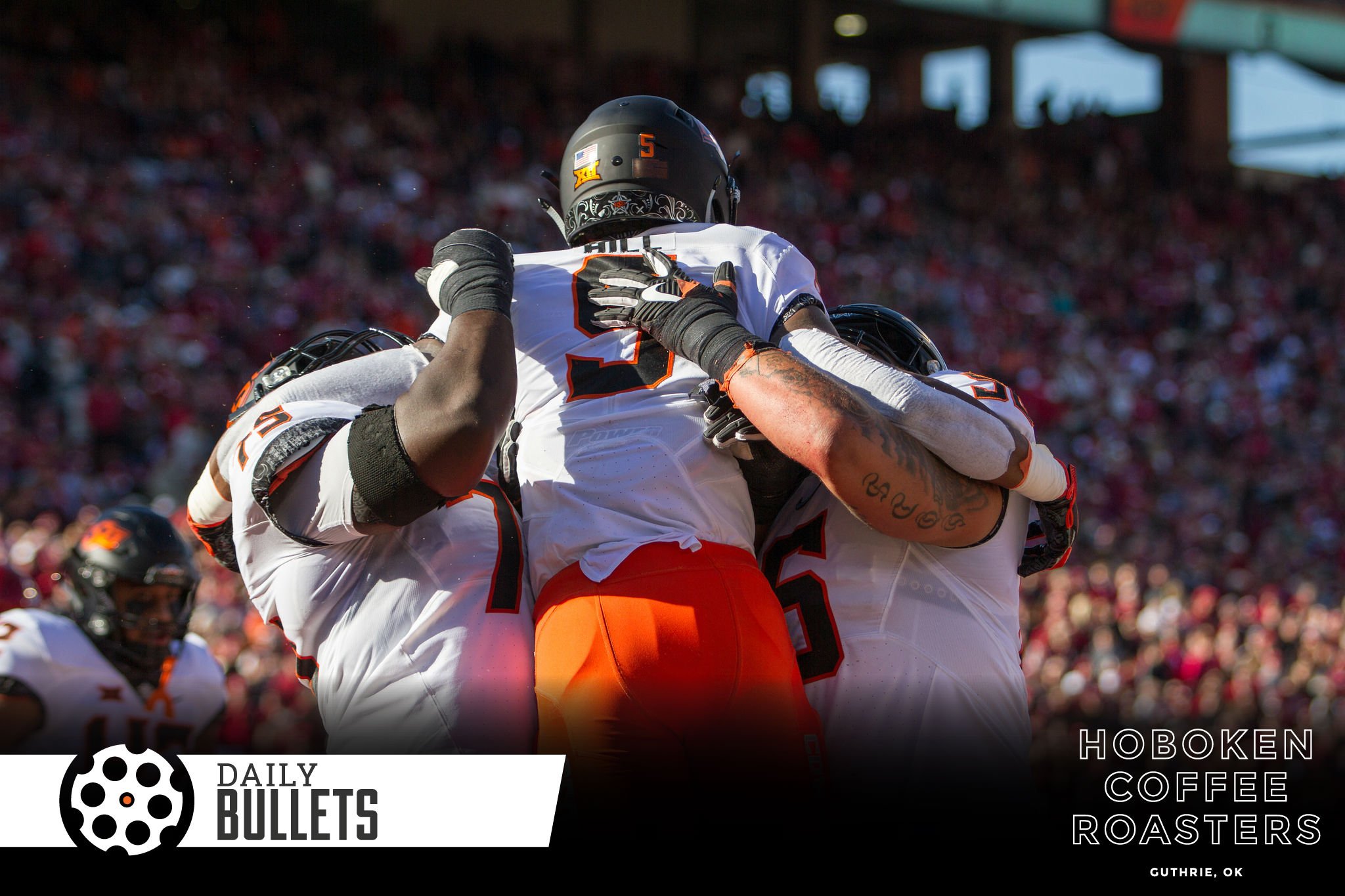 It’s getting cold and lonely on the “Texas isn’t back” island (but OSU beat them and we finished 7-6!), I’m terrified this will cause similar momentum like when OU beat Bama in the 2014 Sugar Bowl.

On a different note, I hope you were like me, stayed in for New Years’ and didn’t have to wear a diaper in Times Square.

• Mike Gundy looks at the importance of continuity on his staff
• Liberty Bowl swung on a couple of plays (and another OSU game did too)
• Players sitting out bowl games: right or wrong?

“Continuity is huge. I guess I can freely say this now, it’s like if you look around the country at athletic directors who say we’ve had a couple bad years, but I’m staying with this coach and then they end up doing pretty good,” Gundy added.

“They made a much better choice because on a smaller scale, when you make a change, you’re changing a lot. Unless you’re in a program if you have really, really, really good players, it’s difficult to make a wholesale change as a coordinator or head coach and then start showing up within the first couple years.” [GoPokes]

When you think about all the different aspects from understanding the culture, recruiting players to fit it, establishing relationships in the areas you recruit, and seeing through the development of those prospects, there are increasing returns having the same folks year to year.

The other side of the coin, of course, is an opportunity to find someone who offers more.

• Enoch Smith pointing out how the game can swing on a couple of plays was incredibly true – and a bit haunting in the scheme of the season.

The other play that made a difference was actually two, and they were both by the same guy. Michael Scott blocked an extra point in the first half and a field goal in the second that would have given Missouri a 36-35 lead with nine minutes left. It would have changed the whole trajectory of the game and the evening. [PFB]

Reading that caused my stomach to rise into my throat while remembering Bedlam 2018 – where a 41-yarder and an extra point were the difference.

•  Jenni Carlson looked at the question of players sitting out bowl games with a nod to Justice Hill’s viewpoint.

Look at Jaylon Smith. The Notre Dame linebacker projected to be a top-five draft pick, but after tearing his knee in the 2016 Fiesta Bowl, he fell to the second round and ended up in Dallas with a four-year contract worth about $6.1 million. Had he stayed in, say, the top three, his deal would’ve been worth at least $26 million.

That’s money Smith can never get back.

Even for players like Hill who aren’t projected as first-round picks, the threat of getting hurt, tumbling in the draft and sacrificing future income isn’t worth it.

What an interesting conversation. The biggest reason for an increase in sit-outs is the increase in earning capacity in the NFL. The difference in a 12th round pick’s compensation and what an athlete could earn in industry may have been negligible.

• HCS had the Pokes at No. 10 in their power rankings with what seemed like a pretty fair analysis.

The only .500 team in the conference, the Cowboys could occupy this spot for a while. They’re talented but they’re thin and they’re lacking a real interior presence. One positive? Curtis Jones joined the team after the semester and in three games became the team’s second leading scorer with 12.3 ppg. The Cowboys are 2-1 in those games. [HCS]

I think this year’s roster is more the result of three coaches in three years (and Sima/Shine leaving early) than anything.

•  I really liked this random tweeter’s take on the Mike Yurcich-to-Ohio State reports.

Congrats & good for Mike. He can leverage for HC job. If I m Gundy, 1st OC choice would be UNT Graham Harrell. He proven last 3 yrs spread O setting records PLUS he has Texas HS coaches relationships for recruiting

a. Good for Mikey Y. OSU coordinators have gotten gigs at LSU (Miles), North Carolina (Fedora), Southern Miss (Monken), OSU (Gundy), and West Virginia (Holgorsen) but tOSU guys have gone plenty of places.
b. If Littrell doesn’t take a better gig, Harrell is ripe for the picking. What OSU needs to be replaced is a QB whisperer but Texas ties would be nice too.

•  Working through my New Years’ resolutions and this comment seemed to be helpful given the task. It’s in the context of a faith-based piece but the remark was helpful regardless of your position.

So here’s a challenge for next year: Don’t make resolutions—make habits.
Unlike resolutions, we actually become our habits. There are no changed lives outside of changed habits. And if we want to actually change, we need to take a sober look at where our habits are leading us. [The Gospel Coalition]

• Not a consumer of M. Night Shyamalan’s work (not my speed) but how he self-funded, kept working and responded to studios rejecting his recent film challenged me.

On a wall in Shyamalan’s production company is a printout of the names of all the execs who said no to The Visit. Most of them, he says, have since lost their jobs. “That list meant different things to me,” he says. “It first meant the obvious, ‘I told you so.’

And then it morphed into something else and as one name after another on the list disappeared, you don’t hold on to that feeling of I told you so. . . . When you’re looking at it like you’re trying to get approval, that’s unhealthy. There’s nothing wrong with the people on that list. My job is to inspire them.” [Rolling Stone]

I’m not sure it’s the right take that he had to convince folks who weren’t doing their job well with what a good movie is, but how he moved through the bitterness and honed his craft inspired me.