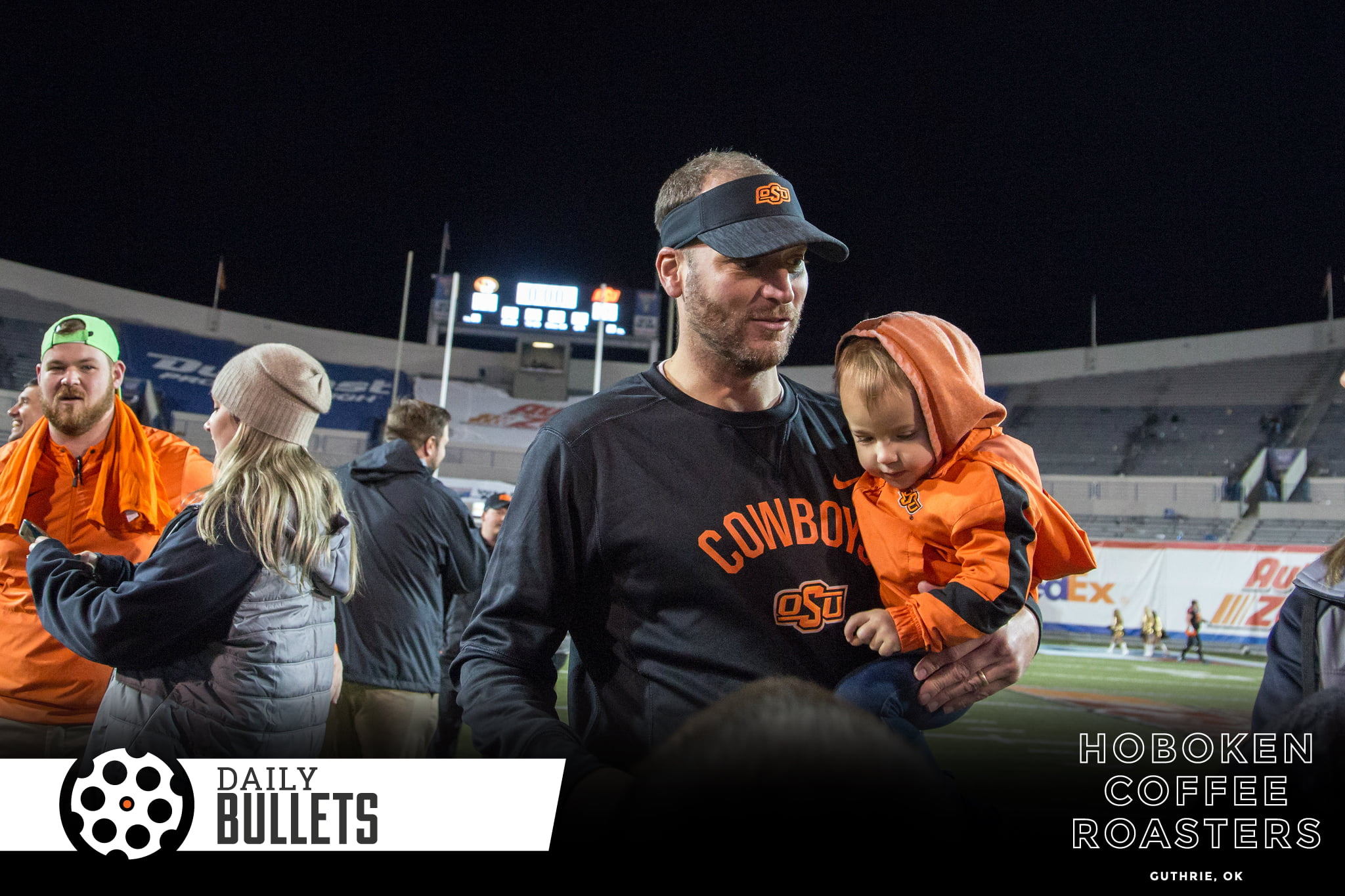 • Interpreting the “whys” around Mike Yurcich taking the passing coordinator job at Ohio State could go a number of directions but one thing’s for sure, going to a campus two hours from his home will be a boon for the Yurcich family.

Recalling this piece Gina Mizell wrote in 2013 about Yurcich’s dad coming to watch him coach in Morgantown was heartwarming.

And Saturday, (Mike Yurcich’s father) will get a brief escape from his life to see that for himself.

He will jump into a black Lexus SUV around 6 a.m. and begin the four-hour drive from the Cleveland suburb of Euclid, Ohio to Morgantown, W. Va., where Mike will coordinate the Oklahoma State offense against the West Virginia Mountaineers. [NewsOK]

• When thinking about who could replace Yurcich, Boone mentioned a guy that seems like he’d be just what the Gundy ordered.

As far as externally, Eastern Washington’s Bodie Reeder, a young coach who was on OSU’s offensive staff under Yurcich, could be another to ?. [PFB]

Given Gundy’s preference for stability, familiarity, and QB coach/playcaller experience, this seems like the holy triumvirate of fits.

• Iowa State’s size numbers weren’t a good sign before the Cowboys took on the Cyclones last night – not a good matchup for the Pokes.

That includes Iowa State, which will feature a starting lineup of players all 6-foot-5 or taller. But Boynton said the challenges the Cyclones present, through both their length and their ability to space the floor, aren’t anything OSU hasn’t seen yet. [NewsOK]

• This conversation between Oklahoman writer Berry Tramel, his 7-year-old granddaughter, and his wife gets truly to the heart of fandom.

“Who do we want to win,” Tinley asked. “Texas or Georgia?”

Texas, I said, not explaining my reasons, which are grounded in conference alignment. I’m a Big 12 man.

Georgia, said the Trish the Dish. “You never want Texas to win.” [NewsOK]

Not unless I’m talking with the few Sooners I love do I feign goodwill for the Sooners. Berry T. can vocally claim he wants the Horns to win but his wife (Trish) knows the truth that applies to all sports fans and their rival team.

• The game-saving shoestring tackle by Kolby Peel was an encouraging sign for the young Cowboy defense.

The Cowboys, seemingly in the process of blowing a big lead in the Liberty Bowl, kept retreating toward their own end zone, with Missouri working its way to a touchdown and a comeback win that would seal a losing season for OSU.

Then the defense, down several key pieces, made a stand, capped by a fourth-and-1 stop that instead sealed victory, 38-33, and a winning season, and served up some momentum for 2019. [GoPokes]

It was a very similar late tackle by Peel against TCU that even gave the Pokes a chance to win the game. If Peel can be another in a long line of sure-tackling safeties, the safety position will have a piece to build around.

#OkState is surviving in Memphis to finish with a 7-6 record and the 38-33 #LibertyBowl won pic.twitter.com/J1bBxwF0qf

• A couple of impressive things:

Attendance numbers at the Liberty Bowl, and…

• Something I love about Russell Westbrook is his evolution as a player – maybe not necessarily adjusting to the modern NBA but how he evolves to make himself more useful.

Westbrook’s career has been about conquering inconsistencies, overcoming inefficiencies and filling the gaps to make up for what he lacks. The harder something is and the more he’s doubted, the more he responds.

“If it was somebody different, that didn’t have that kind of will and drive and belief and determination,” Donovan said, “it maybe would concern me a little bit more. It doesn’t with him because he thrives on stuff like this. He thrives on challenges.” [ESPN]

• Finished another lap through what’s easily my favorite faith-based read of the last few years, a 130-page dive into different angles of “the prodigal son” parable. This clip explaining the two ways we as human find satisfaction alone was worth $13.

Jesus uses the younger and elder brothers to portray the two basic ways people try to find happiness and fulfillment: the way of moral conformity and the way of self-discovery. Each acts as a lens coloring how you see all of life, or as a paradigm shaping your understanding of everything. Each is a way of finding personal significance and worth, of addressing the ills of the world, and of determining right from wrong. [The Prodigal God, p.29]