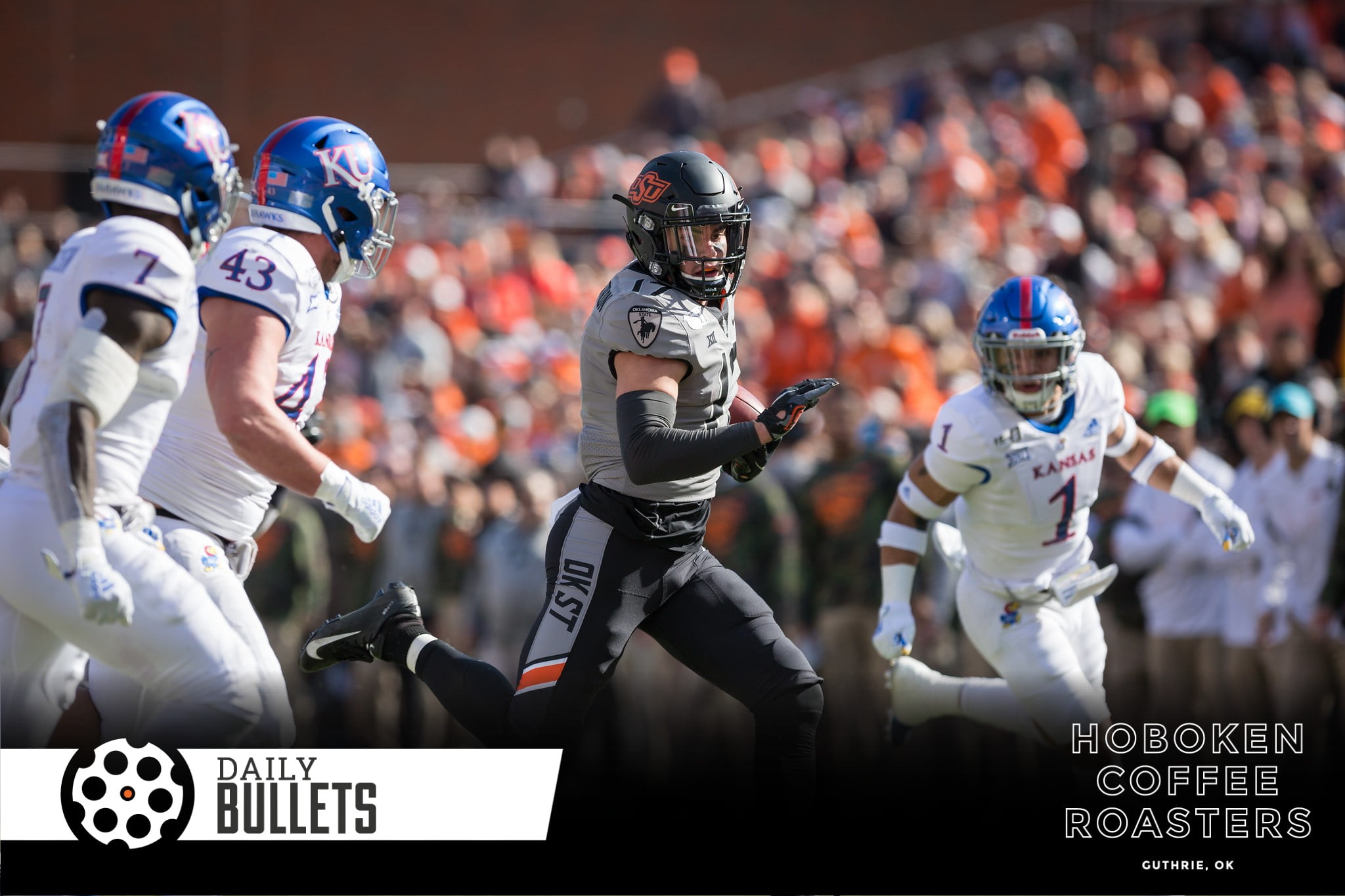 Put me on the record projecting Kasey Dunn with Bodie Reeder as QB coach.

• Most Viewed of the Week (No. 1): Ten Thoughts from Texas Bowl

The thing that I’ll remember from the Texas Bowl was this: No. 8 was explosive. Brayden Johnson continued to fill in admirably as a second threat to Chuba Hubbard and he did so with an average arm setting him up. Porter said it well here:

The thing about Johnson is how terrifying he is as a big-play threat. He had just 21 catches on the season, but they went for 23 yards a pop, which is an astronomical number for an offense that isn’t exactly its former self when it comes to throwing deep balls to its best playmakers. [PFB]

When you think about OSU’s best offenses, they were chocked full of playmakers all over the field. Having the best running back in the country returning would mean a lot but having Tylan Wallace, Brayden Johnson, and Dillon Stoner on the perimeter will inevitably open up some action in the box for whoever is taking handoffs.

a. Kudos for calling the Chuba explosion! 1,800 yards felt strong at the start of the year as Tylan Wallace seemed poised to be set up more as the focal point of the offense coming off a Biletnikoff runner-up season. But taking the over on any yardage total anybody gave you (1,500 felt like a strong estimate, no?) was prescient.

b. Oh buddy with that Bryce Thompson prediction. Important in making that call is an understanding the NCAA seriously slowing down a top-flight program would be an unprecedented one in the modern era. Arizona allegedly paid a player $10,000 a month to play there and has survived virtually unscathed. It’d be the NCAA cutting off its nose to spite its face.

• Most Viewed of the Week (No. 3): Kasey Dunn Notes from the Chamber

This was a fun week for the Oklahoma State wide receiver room, no? OSU subscribed to another year of a top-five receiver from the Gundy era and locked up one of it’s best position coaches for more time.

Something worth chewing on is this – how many times can Gundy hire a cultural outsider from a lower-level before it’s not a fit? Success at one level may or may not translate and the way a person interacts on the Jersey Shore may not translate to Karsten Creek.

• Most Viewed of the Week (No. 4): Five Thoughts on Tylan Wallace’s Return

I don’t think Wallace can impress OSU fans any more than he has, right? It’s hard to imagine him improving and changing our minds about who he is and where he stands on the pantheon.

Before he went down, Tylan was on pace to finish within a Spencer’s throw of his sophomore total of 1,491 that saw him finish second in Biletnikoff voting. If he turns in that kind of season in 2020 he’d be easily within the top 5 in OSU history for a career. [PFB]

That’s the thing – we’re sort of numb to super talented receivers. Adarius Bowman eviscerated a good Kansas team and became Canada’s Jerry Rice but isn’t really in the conversation as one of the top three receivers since the year 2000. Dez Bryant, Justin Blackmon, and James Washington make up a tier, Tylan Wallace, Josh Stewart, and Adarius Bowman are probably on the one below it.

• Most Viewed of the Week (No. 5): OSU Lands Four-Star Arkansas Transfer Collin Clay

OSU landing Clay was water on dry ground. After losing their best defensive line commit to Texas (SGW was too hard to say anyway), the need was there for a talented end to put across from Trace Ford. It’ll be hard for me not to just think “he’s the next Calvin Barnett, right?” Local boy who chose Arkansas first but wound up back home.