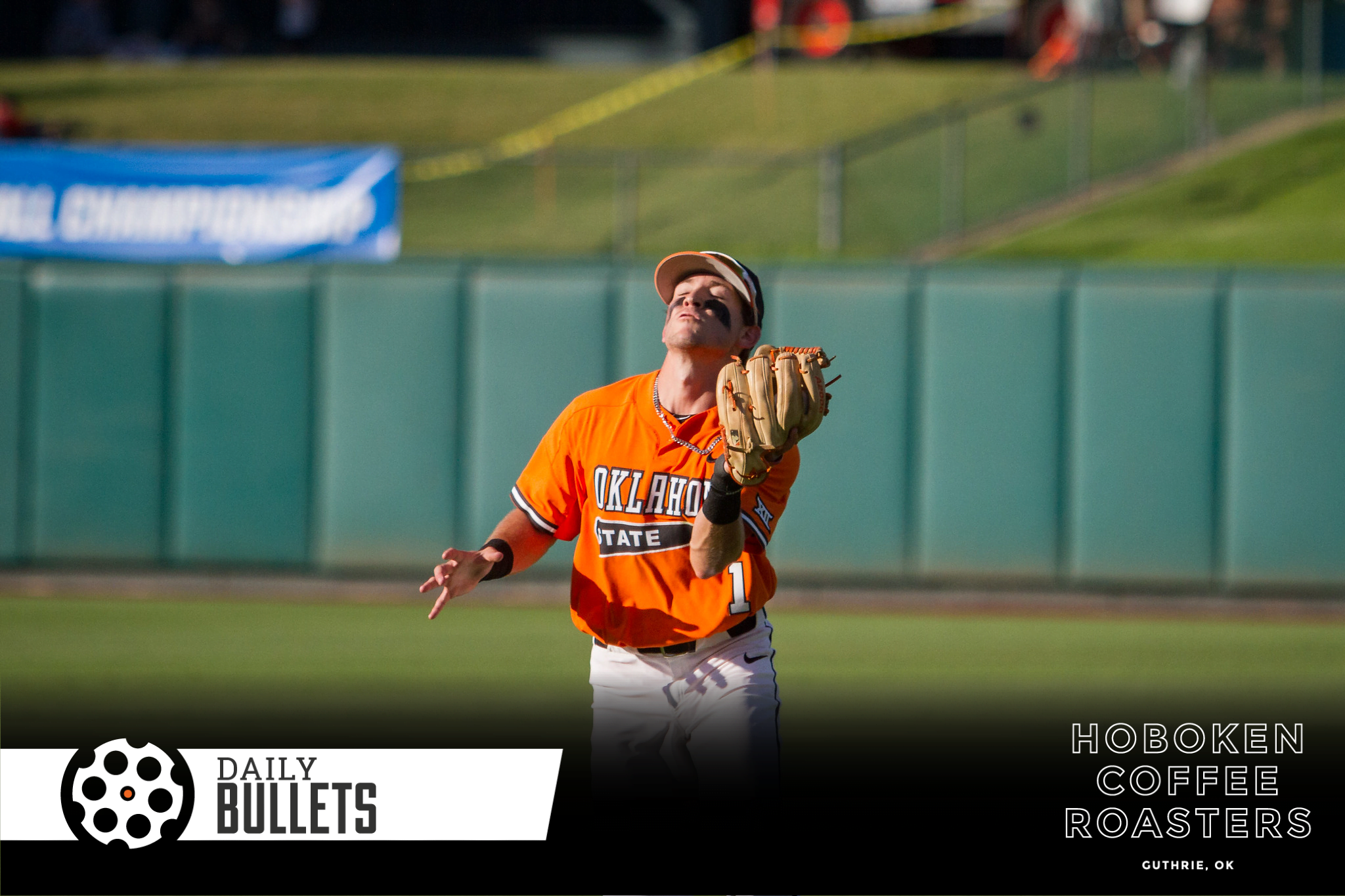 • Good stuff from Marshall Scott on how OSU’s future helped power its team in the present as OSU gets within one game of the 2019 College World Series.

Hueston Morrill is the future of OSU baseball, and Saturday, he was the present.

Morrill, OSU’s freshman second baseman, was 3-for-3 Saturday with a home run, three runs scored, two RBIs and two walks drawn. He also recorded two put-outs and a team-high four assists in the field. It was essentially a perfect game for a teenager playing in his first Super Regional series. [PFB]

Two additional things: 1. The color-on-color uniform matchup on Saturday was sublime. 2. This team is both never out of a game and a ton of fun to watch. I hope it doesn’t end on Sunday in Lubbock.

"To get that win and keep the season alive, it kind of gives you that edge to come out tomorrow and do the same thing."

Colin Simpson and @OSUBaseball is now one win away from Omaha. #okstate pic.twitter.com/E8HPal7Zwe

• Really interesting read here from Scott Wright on the way Charlie Dickey is recruiting and how it could have gone poorly.

OSU coach Mike Gundy had contacted Russ to let him know that Charlie Dickey had been hired as the Cowboys’ new offensive line coach, and Russ went to work doing his research.

“I probably read 20 articles on him, just to make sure I knew who he was,” Russ said. “I read about his career, all the things he did at Kansas State, everything I could find.”

But that first phone call from Dickey was the key.

“It was almost a deciding factor, really,” Russ said. “It was very important, because I didn’t know what to expect. But we hit it off and it went really well.” [NewsOK]

• This on a $1 million suitcase and Josh Holliday’s recruiting pitch is excellent.

Although college comes with expenses, including tuition and fees, Holliday said he can’t put a price on the connections his players establish. He points out to recruits they don’t pick teams to draft them, but they choose a university. When they make that decision, they are selecting their strength coach, academic advisers and teammates, Holliday said. Instead of wondering where professional teams will send them to play, they have constants in their lives as they develop their skills.

I suspect this appeals more to parents than it does kids, and as a parent I have to say it’s pretty brilliant.

• Bill Haisten with some truth here.

The recently concluded spring-sports period was among the more eventful such periods in Oklahoma history. If the state of Oklahoma’s 2019 college football season is as entertaining as what we saw from golf, softball and baseball athletes, people will lose their minds. [Tulsa World]

I honestly can’t even imagine.

• I enjoyed this from Robert Allen on Vaka Tuifua, a kid from Alaska who recently moved to Oklahoma to finish out his high school career. He may or may not eventually get an offer from Oklahoma State, but his story is pretty incredible.

The town’s high school football team, which was 5-4 last season and 7-2 in the 2017 season, where they won the Division III Alaska State Championship, has an artificial turf field located right on the beach to the Arctic Ocean. Barrow was featured in an NFL Films production of Football Town: Barrow, Alaska. [GoPokes]

• You may have missed it because it happened on a Friday night, but OSU snagged an in-state linebacker from Choctaw.

• Sinclaire Johnson closed so hard to win the 1,500 in a near record time.

• You know what would be great? If Mike Gundy did this.

• The only Big 12er who will wear stars and stripes in the Women’s World Cup went to Oklahoma State.

• On the renting culture and why it’s so hot right now.

• What is this question for?

• Chernobyl is amazing. I’ve loved it.