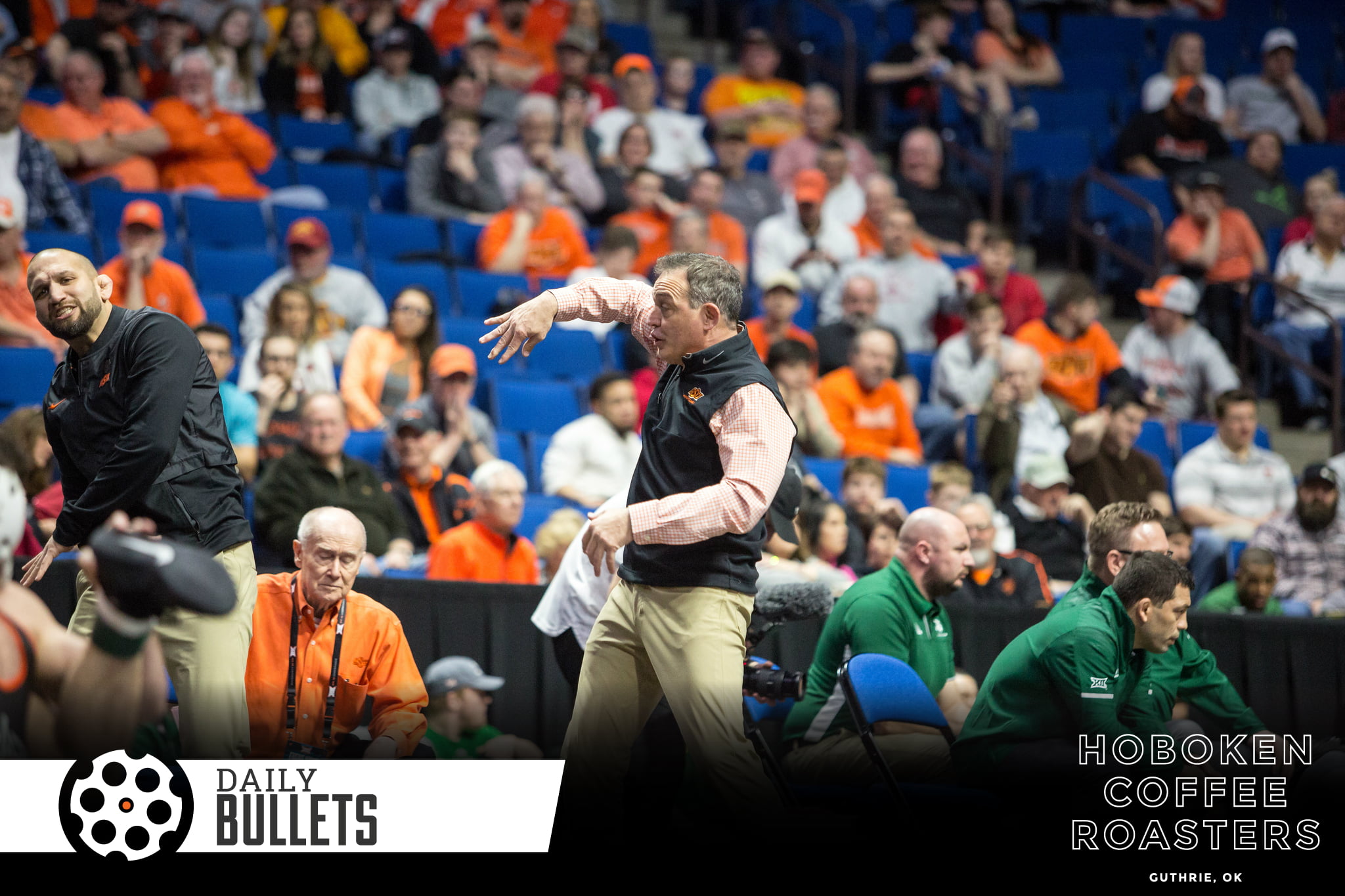 Happy “we get an hour less sleep for no discernible reason other than people have been doing daylight savings time for decades” day.

• OSU sends seven wrestlers to the finals on Sunday. We’ll have a ton of coverage from Tulsa as the Pokes will cruise to their seventh straight conference title (for the first time ever, by the way).

At one point the match got a bit chippy as Gfeller and Olivias were clearly having words with each-other. Gfeller then took a step back and “raised the roof” riling up an already fired up crowd. Gfeller ultimately won the match 7-2. [PFB]

• How good is this little nugget from Marshall Scott on Saturday after OSU beat West Virginia to escape the throes of the Big 12 cellar?

1. Dikembe Mutombo Checks Under His Bed for Yor Anei [PFB]

You should always read Marshall and even more so after wins like yesterday’s victory over the Mountaineers.

• Viktor Hovland made the cut at the Arnold Palmer Invitational, and after 54 holes has a better score than Justin Rose and Bryson DeChambeau. Eamon Lynch of Golfweek caught up with him and Brandel Chamblee to get the latter’s take on the former.

Brandel Chamblee saw Hovland last weekend at the Bears Club in Jupiter, Fla. and stopped to watch him hit balls. He too came away impressed. “He seemed to have the tangible skills that are important to success on the Tour, pedigree and power,” the Golf Channel analyst said. “But more than that, in the brief time I had to size him up, he reminded me of Jordan Spieth. He had that sort of quiet storm about him, which goes a lot farther than a long drive.”

Hovland said he will play in the Masters and the U.S Open. Beyond that, he acknowledged the lure of the pro game is strong. “I’m thinking about turning pro after the U.S. Open or staying another year in school. I haven’t made my decision yet. I’ll make one soon enough.” [Golfweek]

Speaking of Hova, he missed the banner unveiling in GIA on Saturday.

• Alan Bratton did a great Q&A with the Tulsa World, and he was asked if his 1995 title as a player or 2018 title as a coach was better. His answer was pretty awesome.

Coach (Mike) Holder asked me shortly after which one was better. It was like the day after, and I said as a player. It’s better to have the club in your hands. But after I had a little time to think last summer, I still probably think in general it’s better as a player. But comparing our specific championship last year, to do it here in Stillwater.

As coaches, we’re gone so much from our families, so to be able to look over and see my wife and kids there on the side, to give that to them, to know what golf means here and that was our fourth go-around at the championship because we had it in ‘73, 2003 and 2011, I know how many people in Stillwater and the Oklahoma State community care about golf, to be able to deliver that to them, that was way better. So after I let that sink in, I don’t think we would ever be able to top that. [Tulsa World]

• OSU honored its managers on Saturday and I enjoyed this quote on future head college basketball coach Brett Budke.

During a visit to campus with his mom as a high schooler, Rosenthal met with then OSU assistant James Dickey, quickly becoming enthralled with OSU’s culture and campus. It hasn’t quite hit him yet that Saturday’s game will be his last as a manager in Gallagher-Iba Arena. He figures that realization will fully hit him Monday, when the team practices there one final time before heading to Kansas City for the Big 12 Tournament.

Rosenthal is thankful to share Saturday’s ceremony with Budke, son of former OSU women’s coach Kurt Budke. “He’ll be a coach one of these days,” Rosenthal said, “and hopefully, maybe, I’m his director of operations.” [NewsOK]

Said Smith, “It’s who I am. There’s been some guys who after their careers have had cauliflower ear surgically removed, scraped down. There’s no way I could do that. No way. I would never have plastic surgery on my ear. You can’t take that from me. That’s mine. That’s a lot of years of work.” [Tulsa World]

• This is pretty cool.

For @JoeySmoke14 it’s been about more than just the minutes he’s played.

• Luminary aims to be the (what else?) of podcasting. [NYT]

• I’ve been reading a lot of fiction this year. Just finished this one and have kind of waffled on what to really dive into next (although I think I’m going with Donald Miller’s Storybrand). [Goodreads]