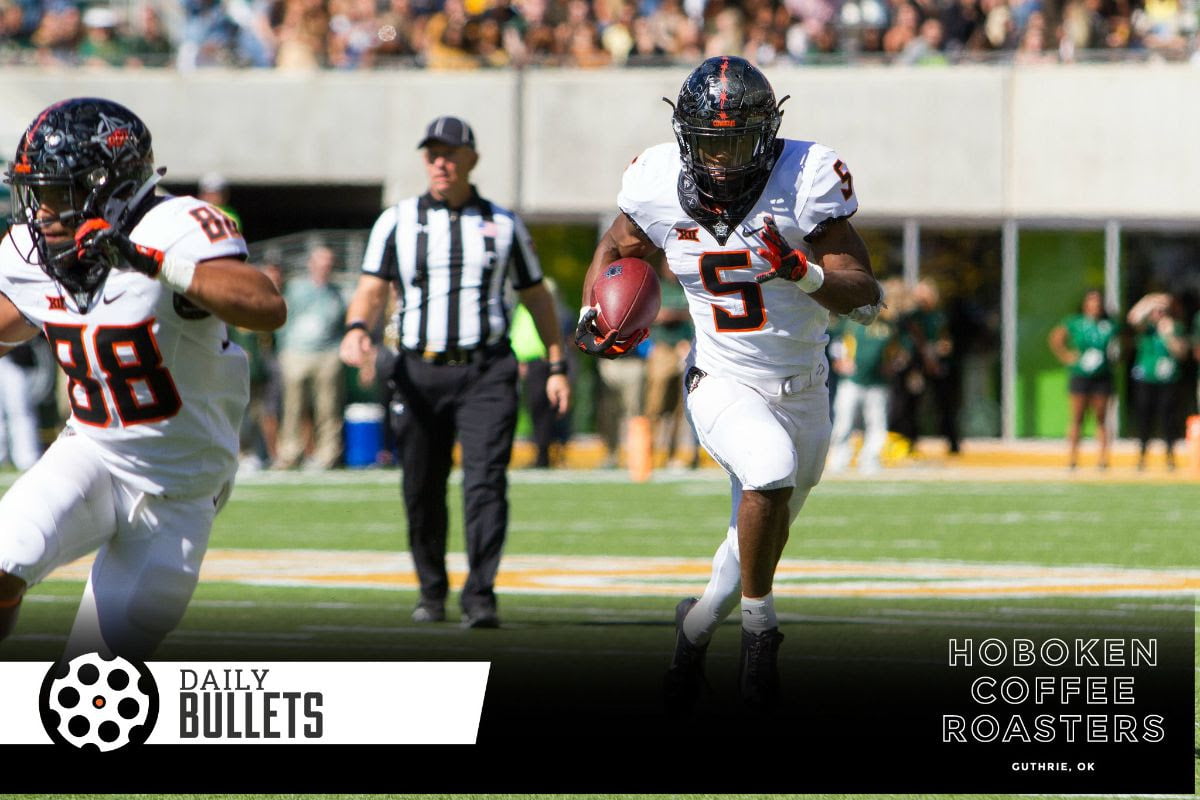 Easily the highlight (thus far) of the spring semester in OSU sports as the masses descended upon GIA. It’s hard not to take pride in how John Smith’s Cowboys just pounded the No. 3 Hawkeyes, especially in the “good vs. evil” win for Daton Fix over Austin DeSanto.

• Most Viewed (No. 2): Three Positions Cowboy Football Must Address for 2020

This is always a tough angle to write from (what’s needed not this fall but next fall) but it’s timely as OSU will start stockpiling verbal commits in the spring. The most startling was the safeties – it feels like we just got the holes filled with Malcolm Rodriguez and Kolby Peel. But when you consider three positions playing at least two-deep, you can see the need. Also surprising (and understandable is after Josh Henson’s two monster classes, o-line needs to keep restocking.

First off – loved the comment Hill made about going to OSU regardless of if who offered him. It’s just a nice thing to say about your alma mater. The real point of interest is around his conversation with Gundy who wasn’t pleased when Hill announced he was going pro. Both sides have their valid points – Justin Blackmon stayed for another year, so did James Washington. Seems like a fair precedent to work from. But in Hill’s case, running backs have to capitalize and being a three-year starter that probably can’t develop more physically is a pretty compelling case for topping out.

• Most Viewed (No. 4): Looking at the (Potential) Offensive Side of the 2020 Football Class

This was a great point – putting flesh to the aphorism “if you have two quarterbacks, you don’t have one.” The differences in production from one QB teams to multiple QB teams was as expected – outside of 2013 and Todd Monken’s 2012 team, OSU always finished the season 6-6 (higher with a bowl win). The strategy is clearly to put your eggs in one basket (see Corndog in 2018) and hope QB1 establishes confidence, continuity, and rhythm over time.

• Liked this different angle on feelings of incompetence

• Loved this reflection on virtues – some faith-based values but you can replace with others and still be useful. The full article is worth checking out – somber and religious but the final paragraph resonates.

David Brooks speaks of the difference between résumé virtues and eulogy virtues. “The résumé virtues are the ones you list on your résumé, the skills that you bring to the job market and that contribute to external success. The eulogy virtues are deeper. They’re the virtues that get talked about at your funeral, the ones that exist at the core of your being—whether you are kind, brave, honest or faithful; what kind of relationships you formed.”

I’ve spent years trying to develop my résumé virtues, only to discover that while these virtues are important, other virtues matter more: how I love my wife, how I am growing in my affections toward the Lord, how willing I am to define greatness not by tasks accomplished and visions fulfilled, but by simple obedience and patient love. [TGC]