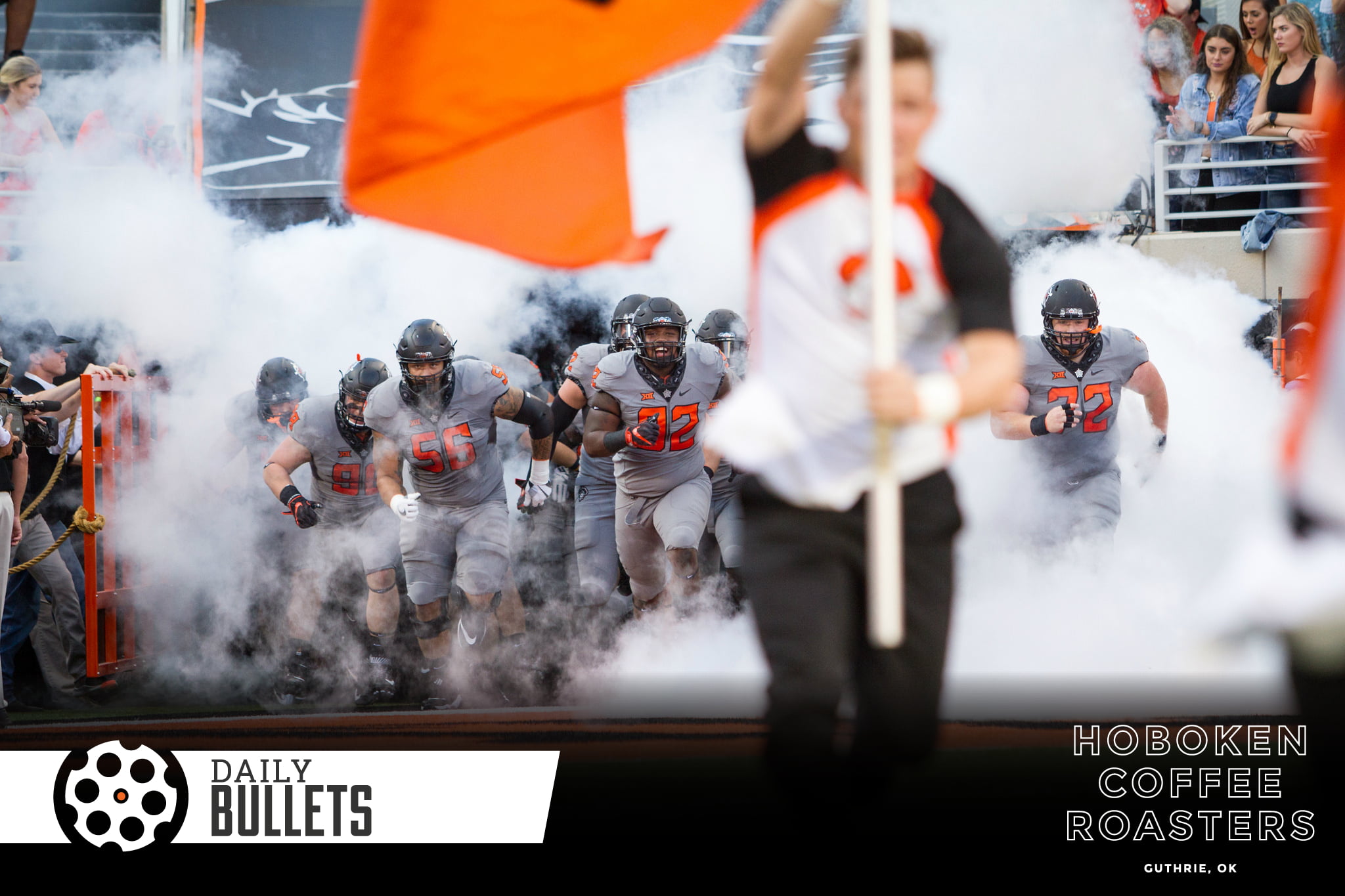 It’s not too late – fill out your bracket this AM and join us for the tourney challenge for a shot at some free gear.

• In a fun piece imagining a Big Dance for college football in 2019, the Pokes get out of the first round but not past the first weekend.

(10) Oklahoma State 32, (7) Minnesota 31: A tough decision here as Minnesota is trending upward with a deep group of running backs, while Oklahoma State once again will have a new starting quarterback. But in a matchup of elite receivers, the Pokes’ Tylan Wallace edges the Gophers’ Tyler Johnson, making a leaping touchdown grab in the final minute. [ESPN]

The Pokes hit a Bedlam wall in round two and head home after a loss to the No. 2 seed in their region.

• Cox went through and listed his favorite moments from the basketball season – you can guess which one will be etched in minds forever.

With OSU down 6 with a minute left, Lindy Chitwood (Waters)— I will continue to beat that nickname to death until it eventually catches on or I am ridden out of town on it — looked across the huddle and said “I’ll make it” to Boynton, and he did. Again and again.

Waters’ 12 points in less than a minute to put OSU into overtime was an all-time performance, minus the payoff. [PFB]

It was the prototype “am I really seeing this?” as shot after shot fell.

• If you’re looking for a team to pull for, how about Win Case, an Ole Miss assistant with Cowboy roots – and his words about his return trip to GIA sound similar to most Cowboy alums. As if being the team playing OU wasn’t enough.

Case returned to Stillwater in December 2014 for an OSU-Middle Tennessee game. The Cowboys won easily, 68-44, but the night was memorable for Case.

“I was almost in tears, just coming back,” Case said. “That was my first game back as a coach on the opposite bench. And getting the reaction I got from the fans just really touched my heart. So it’ll always be a special place for me.”

Case, 55, would like to be a head coach again. He misses the gameplanning and decision-making that goes with the top job. He figures working so long for Davis will lead to some options. [NewsOK]

Case’s time in Stillwater was highlighted by a couple of years in orange and black playing with a scrawny guard from Edmond named Bill Self.

• Enjoy the day, my friends.

With 24 hours to go, time to unveil my favorite thing I do every year

RT to save a life pic.twitter.com/w4IklAMdoX

• Some readers commented on the recruitment of this Oklahoma football trio yesterday.

“It’s been going really good,” (Javian) Hester said. “We’ve been getting a lot of offers and that’s what I like to see, just all my brothers getting the same offers as me and to be able to play with each other too.”

Only (Myles) Slusher currently holds an offer from Oklahoma State, but the Cowboy coaching staff is currently evaluating (Sevion) Morrison and Hester. I have a feeling that if Oklahoma State ends up extending an offer to the two, there could be good news in store for Cowboy fans. [GoPokes]

• “The art of the buzzer beater” was a solid college basketball piece.

• A pretty pessimistic Thunder piece but it’s warranted.
• A solid look at the issues at Boeing – explains some of the news lately
• Finished this short non-fiction read about a Brit that kept traversing the Antarctic – it’s sort of Into the Wild for a type-A person. It’s interesting to listen to the thoughts of someone who loves that kind of challenge.