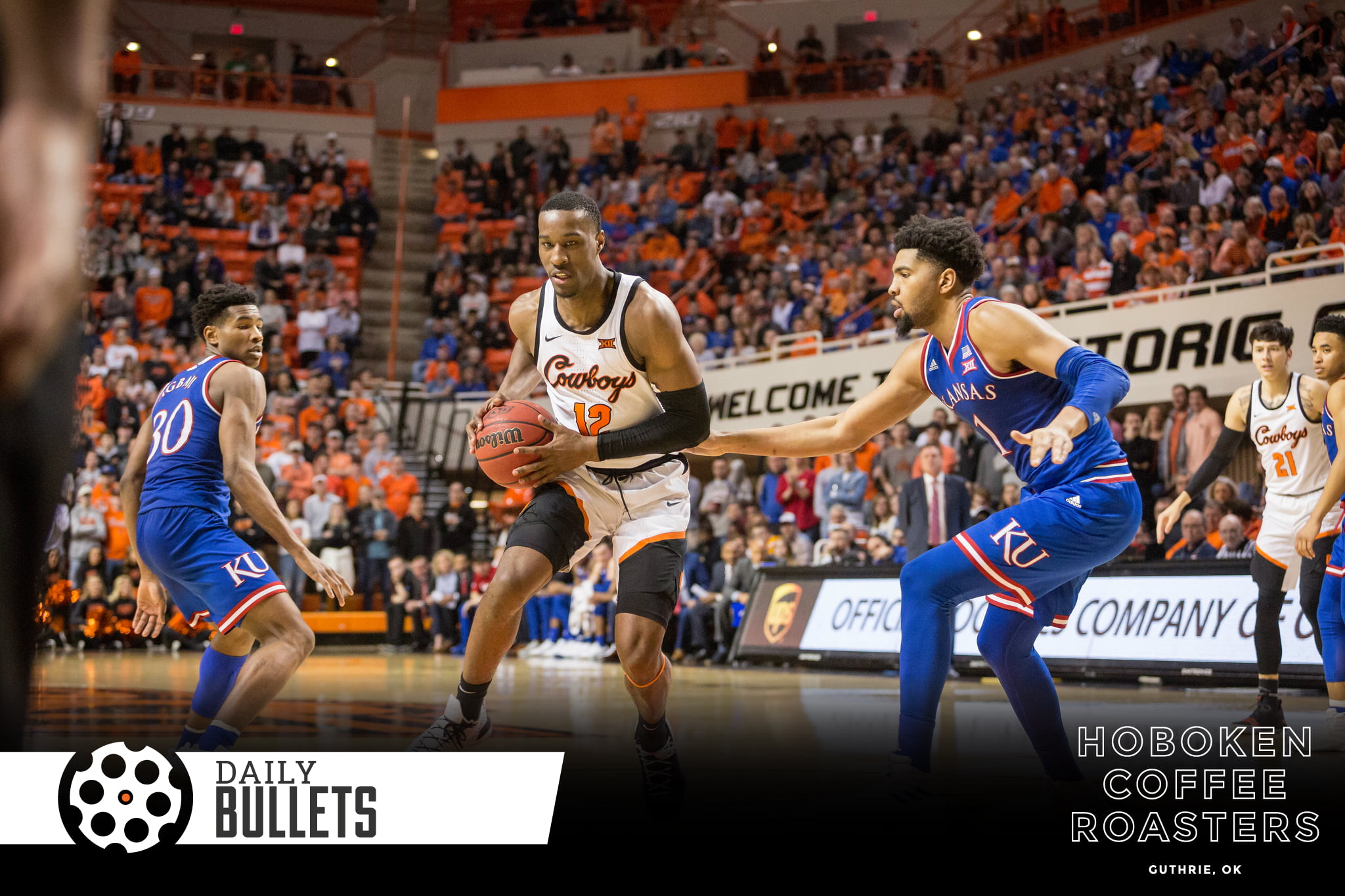 One week from today there will be no more regular season OSU football or hoops for approximately six months. ?

• PFB: come for the OSU news, stay for the Cool Runnings references.

At the under 12 timeout of the second half, the Cowboys were down 50-47. Yor Anei was on the bench with four fouls and Lindy Waters was in the locker room with an apparent leg injury.

It looked like a prime spot to roll over and go peacefully like a 10-win team with seven scholarship guys should, but the Pokes just wouldn’t. After a few back-and-forth possessions, the Cowboys went on an 8-0 run that gave them a 60-55 lead with 7:59 left.

The Cowboys again fought as if they have more than seven scholarship players. They fought like Saturday’s game was do or die when in reality it was a means to an end. I thought the Cowboys lost all their fight against Kansas State last week, but they popped back up and are going to drag this down season across the finish line.

This season is like reenactment of “Cool Runnings,” an all-time great substitute teacher movie, the only difference is when someone asks Sanka if he’s dead, Cam McGriff replies, “Nah, man.” [PFB]

If you're an #okstate fan, you're hoping Christian Brown's mom dug the blunis. https://t.co/beUuEC51WS

• Speaking of Boynton, Guerin Emig wrote a nice column on his three hardened juniors and a bummer of a college journey they’ve been on.

“I’m thankful they’re all here. I didn’t recruit any of them here. But I haven’t recruited anybody here that is more important than they are.” McGriff, Dziagwa and Waters were important a year ago when OSU overachieved to a winning season. Double their value now. [Tulsa World]

They aren’t lost careers, of course, because how can you measure the value of the College Experience, but they won’t be remembered fondly like they might be on greater teams. Which stinks. For everyone.

The Steelers appear to have a plan to replace their triplets with one of the finest sets of college triplets in recent memory, and two-thirds of that plan have already been realized. Last year the Steelers drafted Oklahoma State’s wide receiver, James Washington, in the second round, and its quarterback, Mason Rudolph, in the third. Last night, Mike Tomlin and Kevin Colbert sat down with the third part, running back Justice Hill, here at the NFL Combine. [247]

• Justice turned a lot of heads this week in Indy.

A recurring joke on The Ringer NFL Show is how much I enjoy athletic testing numbers. Two years ago, I was pounding the table for Alvin Kamara, despite having barely seen any of his tape, because of his 39-inch vertical jump and 131-inch broad jump. I think explosiveness like that suggests a baseline of talent that can thrive in the right situation. On Friday, three running backs showed that they have that sort of athleticism, and they were led by Oklahoma State’s Justice Hill.

Picking running backs in the first round has fallen out of favor with many franchises, making these kinds of players value picks. Hill might go in the second round, according to recent projections. Jeremiah has just one running back—Alabama’s Josh Jacobs—in his first-round projections. One of these players might use their athleticism as well as Kamara has: The Saints’ third-round pick in 2017 was the NFL’s Offensive Rookie of the Year. [Ringer]

If you haven’t seen the video evidence …

• So, uh, targeting is about to get both more and less stringent? One proposed rule is that second offenders could have to sit out an additional game. Here’s the other proposed rule.

Basically, the benchmark for what constitutes targeting would go up somewhat and depend more on replay officials. It feels likely that would lead to a slight decrease in confirmed calls. Limiting especially dangerous plays, in a way that is fair to the competitors on the field, is essential. If these rule changes could accomplish that, then great, but I still think reserving ejection for careless or deliberate targeting would do more. [SB Nation]

• Robert Allen interviews a potential QB of the future for OSU. Ken Seals is a top-60 Texas player and a top-15 QB nationally. OSU hasn’t offered, but the appeal is at least intriguing.

You get the feeling that Seals is hoping that Oklahoma State might be the one. Just this past week since he was, in our opinion, the best of the quarterbacks at the UA camp, even though another quarterback was selected afterwards, he had two more offers to go with Vanderbilt, Boston College, Cincinnati, Minnesota, North Carolina State and others as Princeton and Rutgers offered scholarships. He said he expects to hear from Oklahoma State and Texas A&M soon. [Go Pokes]

• Can we talk about the shirt Tre Flowers is wearing here?

• Hoops not the only place that had big time recruits over the weekend.

• Seth is so deep in the wrestling game. So deep.

NEO heavyweight Tony Andrade last year “I hope to win a national title and transfer to #okstate and compete for John Smith and his staff.”. He just accomplished the first part in dominating fashion. pic.twitter.com/VsW6B19ADx

• Mark Cooper named a top-10 beat writer by the APSE. Certainly deserving and congratulations to him. I always root for TW and Oklahoma guys and gals.

• For all my DFW folks: Deep Ellum put in a Ft. Worth brewery.

• All the conviction here.

• I’ve been hooked on fun fiction recently, including this one.