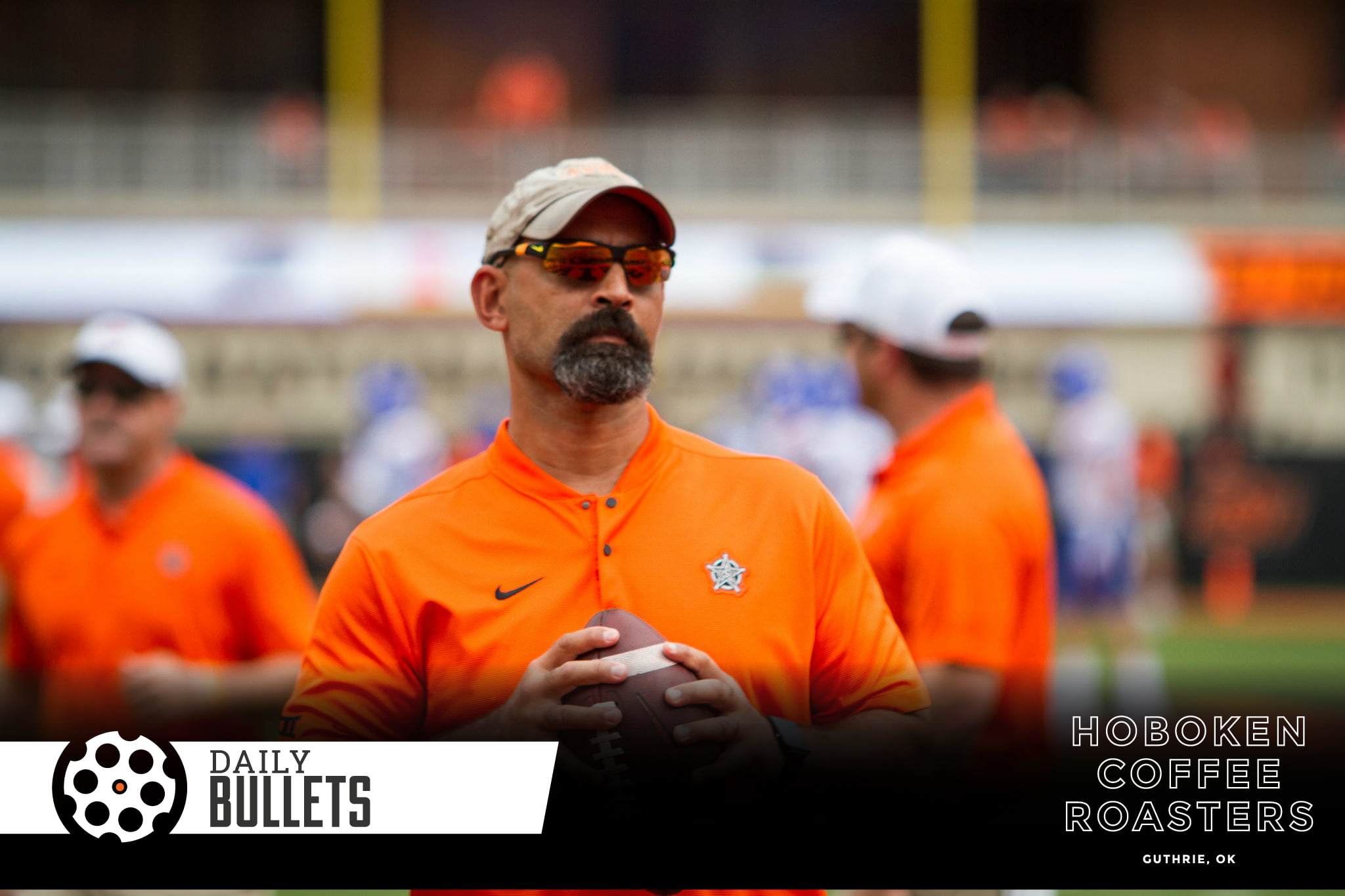 If this Kasey Dunn promotion turns him into OSU’s Cale Gundy, I’m all for it. Heck, I’ll settle for just a couple more years of this magic.

• News out of Stillwater yesterday that receivers coach Kasey Dunn got the bump in title that was rumored.

“Kasey has positioned himself to be a head coach in the near future,” Mike Gundy said in the release. “His discipline and dedication to OSU football has benefited our program in a huge way. He has a track record of player success that speaks for itself.”

Reports surfaced earlier in the offseason that Dunn was a candidate for Oregon’s receivers coach position. Last season, Dunn made $410,000, the sixth most of any receivers coach in the country, according to FootballScoop.com. [PFB]

Two q’s come to mind: will Dunn be the highest-paid receivers coach in the country and is he more likely to get a head coaching gig with the new title? I don’t believe a Gundy position coach has made that leap in the past but you could convince a Sun Belt team that a sort of Biletnikoff-laden “Gundy internship” qualifies him as well.

• Remembering the Bedlam blowout of 2011, I had completely forgotten it wasn’t a Weeden-to-Blackmon parade that led the way.

The ‘Pokes would end up targeting (Justin) Blackmon 13x on the night, yielding 10 catches for 95 yards at 7.3 yards per target with zero TDs. A solid day’s work and as good as anyone else in the league did against the Biletnikoff, but they didn’t have enough left to stop the OSU run game. Lead RBs Joseph Randle and Jeremy Smith had a combined 29 carries for 270 rushing yards and four TDs. [SB Nation]

• When Boynton’s Pokes finish up in Kansas City, here’s a fun fact to think about:

In four days, OSU suffered two losses by a combined nine points to teams competing for a conference title. Although his team temporarily dropped into last in the Big 12 with Saturday’s defeat, Boynton expressed confidence in OSU’s future. [NewsOK]

If we’re still having this conversation outside of the Big Dance next spring, a different tune will likely be whistled. But it’s worth whistling now.

• A little bit of a mixed bag in this week’s schedule as Boynton’s Pokes finish up the season:

In that time, OSU will travel to Baylor before hosting West Virginia. Those two teams have defied expectations this season in opposite ways. Baylor was picked to finish ninth, yet still have an outside shot at grabbing a share of the Big 12 title, while West Virginia was picked third and absolutely stinks. [PFB]

Baylor is becoming the team I hate to watch OSU play regardless of sport. You just don’t expect them to be as competitive as they are.

• Some really good thoughts on technology and how it is what we make it.

But the deeper reason that technology so often disappoints and betrays us is that it promises to make easy things that, by their intrinsic nature, have to be hard.

Tweeting and trolling are easy. Mastering the arts of conversation and measured debate is hard. Texting is easy. Writing a proper letter is hard. Looking stuff up on Google is easy. Knowing what to search for in the first place is hard. Having a thousand friends on Facebook is easy. Maintaining six or seven close adult friendships over the space of many years is hard. Swiping right on Tinder is easy. Finding love — and staying in it — is hard. [NYT]