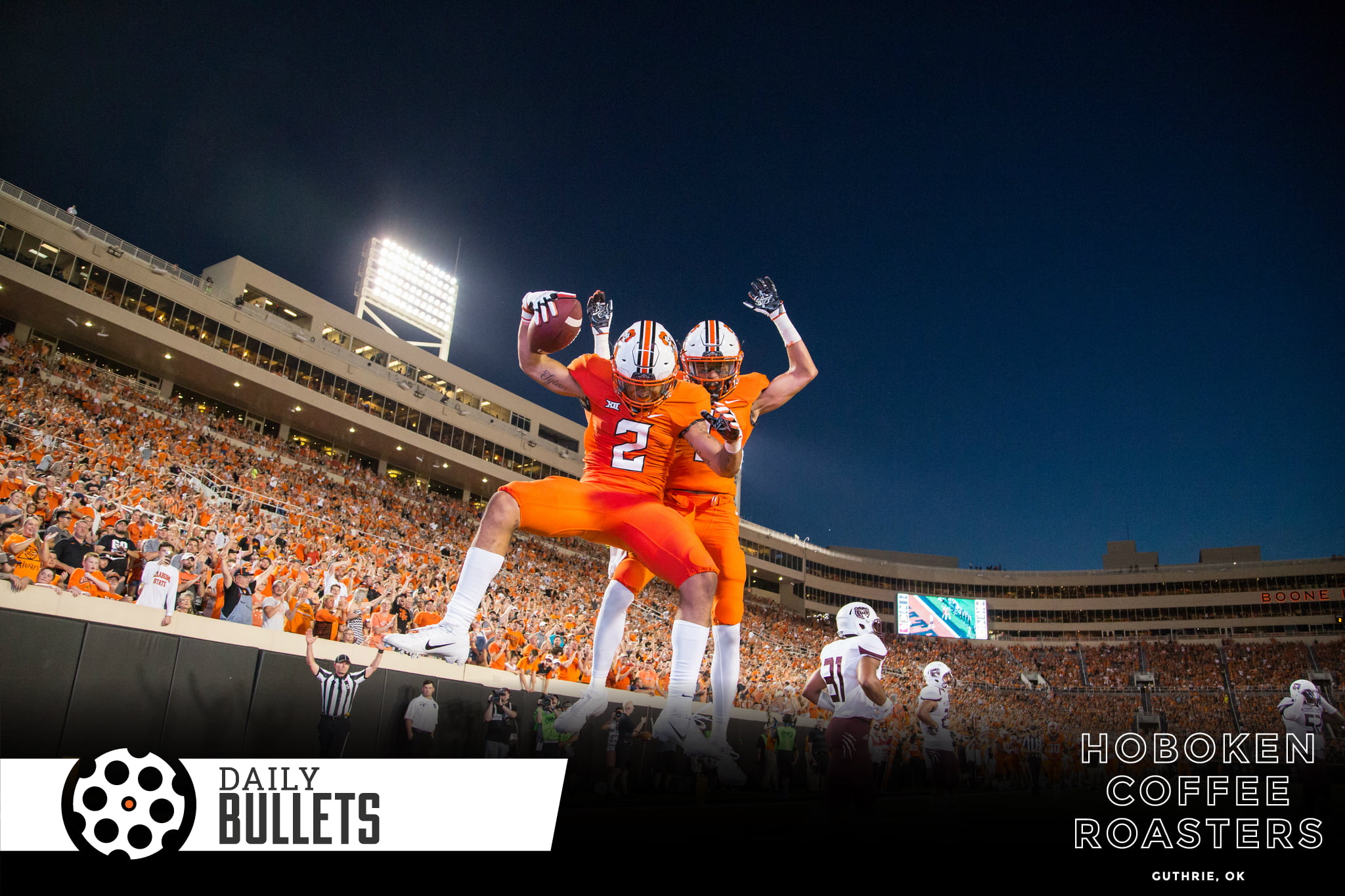 I was happier than a camel on a Wednesday with that win last night. Loved the Pokes going at the Bears frontcourt attacking the basket late. “Mike Mike Mike!”

• So who will be lining up across from Tylan Wallace this fall?

There is strength in numbers and (Kasey) Dunn has that in candidates and in raw athletic measurements. The beauty of this is Dunn is a s good an instructor in teaching awesome wide receivers as there is. I expect a winner or two to come out of spring practice, but there will be a new addition in the summer in Langston Anderson and he isn’t coming to Stillwater with the intention of redshirting. [GoPokes]

Listed in the article are redshirt freshman CJ Moore, Patrick McKaufman, Jonathan Shepherd, L.C. Greenwood, and Langston Anderson as the dark horse. I think you look to the three veterans early in the season but don’t be surprised if Moore or Anderson wind up at the top of the depth chart to finish the season.

• One of the more encouraging aspects around the future of Cowboy Basketball is that good players still want to join *whispers* the Big 12’s worst team.

“(It) also excites me that the next way you build it is you’ve gotta have more people interested in coming to help you. We have that, so recruiting is a big deal in this thing, and recruits believe in what we’re doing, so as much as what these guys are doing shows that this team has a pulse still. The fact that there’s some really good players out there that are still interested in what we’re doing at 10-19 now shows that we’ve got a chance to really build something long-lasting.” [TulsaWorld]

Without teasing out this idea to its endpoint, it seems like the argument “come here and be the guy” doesn’t get guys to campus as much as “come be a part of this awesome thing”. I think that’s why what Boynton is doing on the recruiting trail is so impressive.

• For as much as Mike Gundy fills out his roster from Texas, this recruiting fact about Oklahoma surprised me.

Dating back to 2018 and including the most recent 2019 class and the current 2020 class, OSU’s highest-rated commitment has been an in-state prospect. (That holds true for four of the last five years if you also include 2016, which had Calvin Bundage and Tramonda Moore atop the signing list. Tylan Wallace was the top prospect of 2017.)  [PFB]

Love this behind the back pass to Hayward from Smart pic.twitter.com/VIIq7tOzRq

• Something I’m still trying to figure out as a common fan is if Mike Boynton is a good x’s and o’s coach.

Boynton’s Xs and Os might still be in development, as he is only 37 and in his second season as a head coach, but he has also shown a lot of potential there. His baseline in-bounds plays have always been good, and he has shown an ability to adjust. [PFB]

Last year, this was my favorite aspect of Boynton’s coaching. It could just be how incredible a majority of basketball coaches look after watching a clean decade of Travis Ford offenses but seeing shots and easy plays come out of the flow of offense was incredible.

It’s reasonable for a minor regression as other teams now have a year of tape on what the Pokes like to do (and only seven players to do it), I’ll be forming more opinions in year three.

– #OKState won the conference and made the Final Four
– Mike Boynton was a senior at South Carolina (I was … 13 years old ?)
– Georgia Tech(!) played for the national title (St. Joe’s and Stanford were 1-seeds)

• Differentiating between loud voices and important voices (not a parenting article)

• Some really good faith-based thoughts on being busy