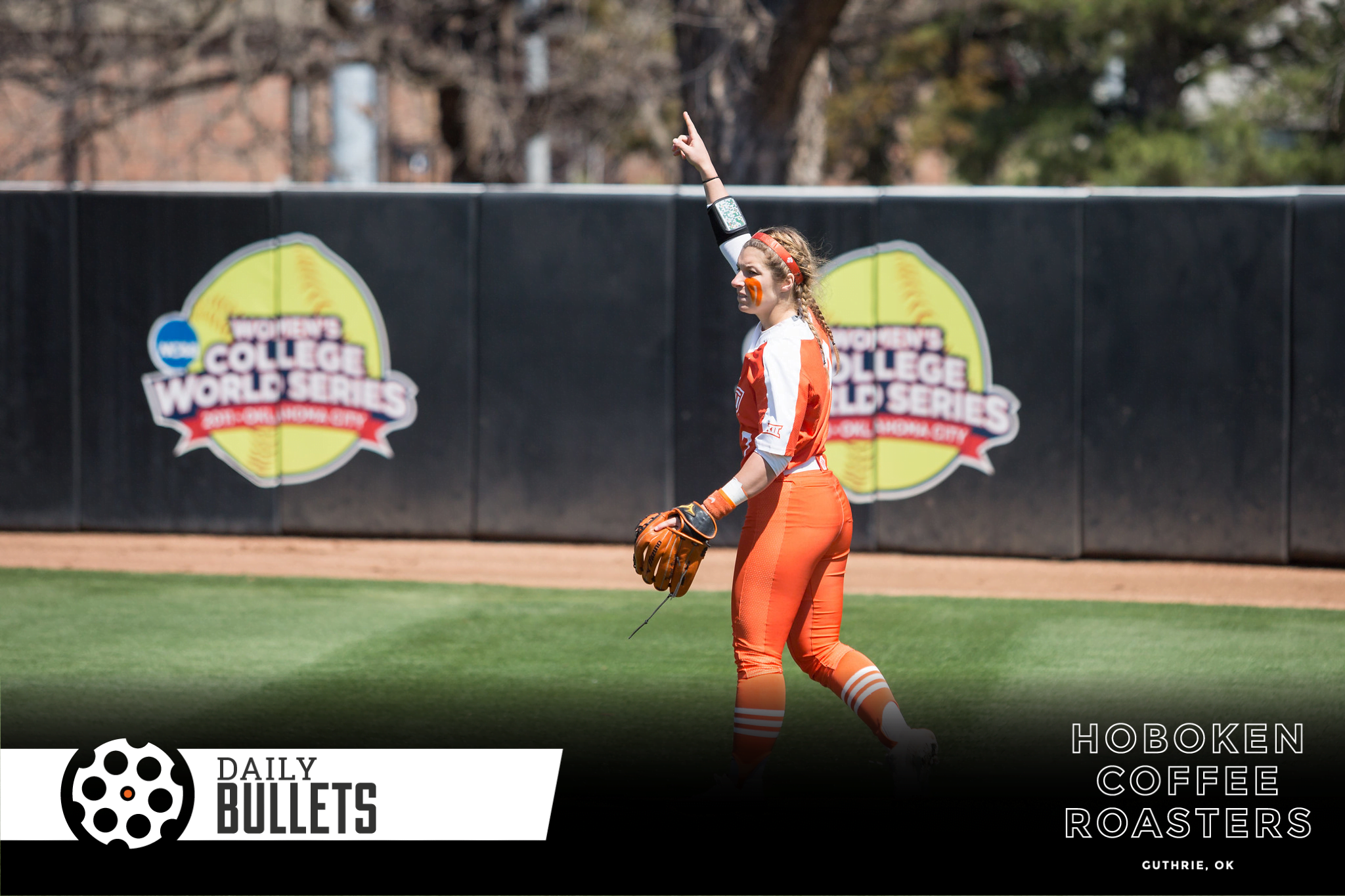 Welcome to the Austin Eckroat show.

• Stilly > Tally
• Homer Simpson isn’t enough
• What’s up with the B12 baseball tourney?

• OSU took down the champs in Tallahassee on Saturday.

Oklahoma State punched its ticket to OKC on Saturday when the Cowgirls took the Tallahassee Super Regional two games to one winning the rubber match 3-2 win over the defending national champ and 4 seed Florida State.

This will be the eighth trip to the College World Series in program history and the first since 2011. [PFB]

Then they got a homecoming reception at the Stillwater airport when they returned home. A pretty great run for Kenny Gajewski and crew.

The greatest fans in all the land. 🧡🧡🧡 #okstate pic.twitter.com/lUuxHV9KuP

• Collin Simpson hit another home run, and Josh Holliday glowed despite the Pokes’ loss to TCU in the Big 12 Tournament on Saturday.

With the smash, Simpson has hit home runs in all three of the Cowboys’ games in the Big 12 Tournament this year. He has hit a homer in his past five games and in seven of his past eight games.

“He’s the best power hitter that’s played here in quite some time,” OSU coach Josh Holliday said. “He’s a very special kid. We’ll have a real hard time replacing him the person. Obviously him the player is pretty awesome, but him the person is equal parts a treat to be around.” [PFB]

• Berry Tramel asks a question I’ve been thinking about all week as Jackson Lavarnway and Marshall Scott have been traipsing up and down I-35 from Stillwater: Is the Big 12 Baseball Tournament any good?

It’s not marketable. The conference baseball tournament thrived when it was the Big Eight and only four teams qualified. That’s when All Sports Stadium often was packed with OSU and OU fans. The Big 12 formed in 1997, and the first two years of the tournament, only six teams qualified.

Then came the eight-team field, but it was the early days of Bricktown Ballpark and fans were excited to be there, even if the schedule was chaotic. No more. How do you sell a tournament in which the marquee game starts at 9:45 p.m. on a worknight? It’s madness. [NewsOK]

• OSU loses out on Trennan Carlson, which stinks, but I thought this nugget from Robert Allen was pretty interesting.

In the end, the biggest factor at linebacker over the summer won’t be a late addition, might not be the productivity of work in summer workouts and the limited meeting time with the coaching staff, but most likely it will be the physical condition of Devin Harper heading into fall camp. Harper, after all, proved himself last season when Bundage was injured against Texas Tech and Harper inserted in the line up picked a pass for a touchdown and played well enough that the folks at Pro Football Focus made him a first-team selection to their first half of the season All-Big 12 team. The analytics added up  and with Harper healthy so should the Cowboys depth at linebacker. [Go Pokes]

• OSU is cruising at NCAAs in Arkansas. I mean cruising. They beat every other team by at least 11 strokes on Saturday and go 1-2 on the leaderboard currently.

There’s still a lot of golf left because this field will be cut to 15 teams after Sunday’s round, but OSU is undoubtedly in control to get the No. 1 seed in the match play portion of the event, which starts on Tuesday. The big question over the next 36 is who will win the individual award. For Wolff it would be a sixth win of an unreal sophomore season. For Eckroat, a bookend to an incredible month. [PFB]

• The best OSU players in NFL history are … better than the best OU players?

• OSU offered Rejhan Tatum and Donovan Stephens — both from Del City — on Friday.

• Are these the last days of Marv Albert’s career? Always read Bryan Curtis.

• Beginning is magical. So is finishing. We can embrace both.

• On Mallory Rubin and her love of dragons.

• I’m about to finish The Impossible Climb and also reading Reason for God and the Read-Aloud Family.