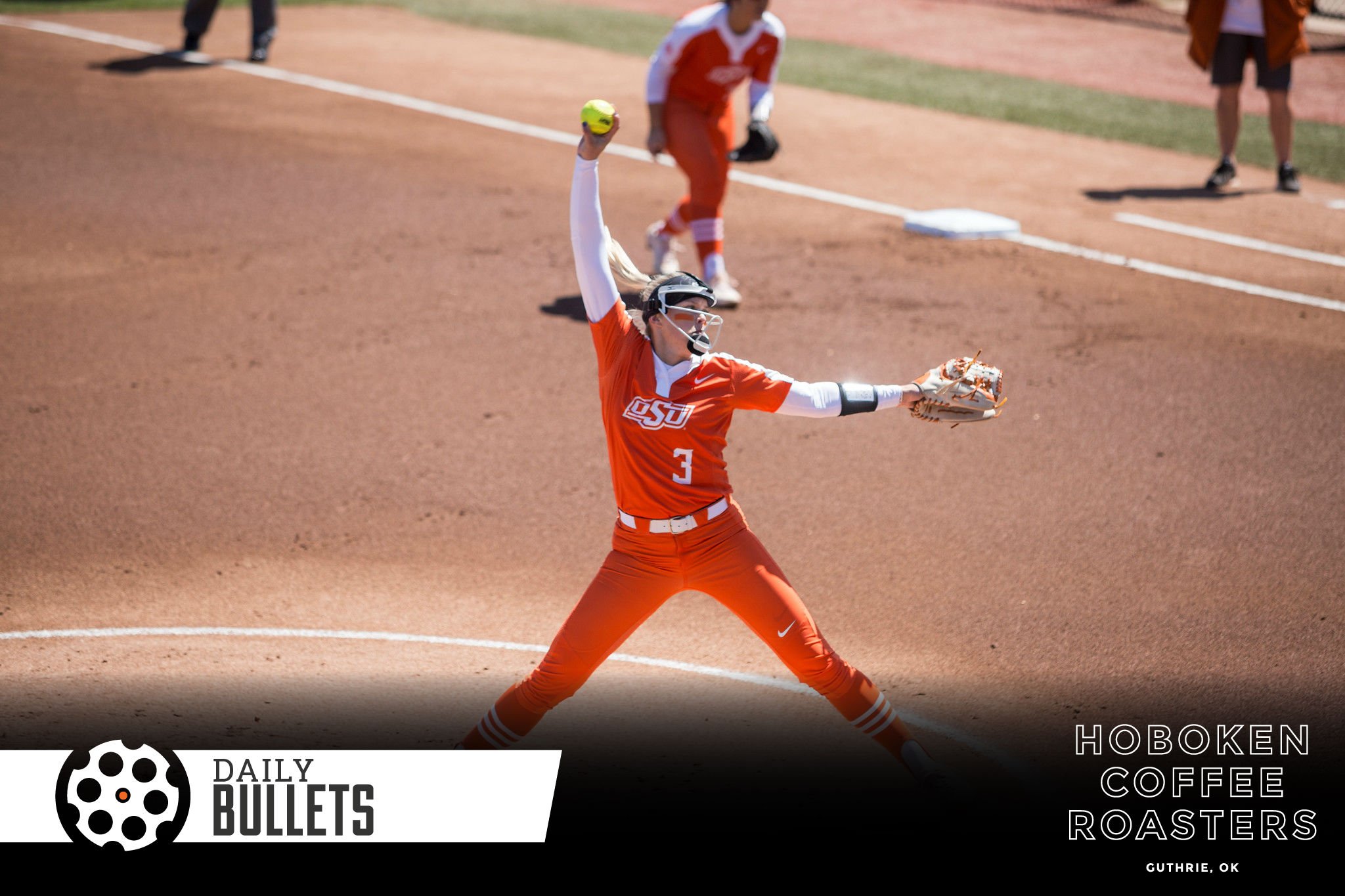 Picked the right time to watch my first inning of softball (possibly ever) last night – Show’s bombs are a thing to behold.

• Cowgirl Samantha Show had ice in her veins last night as she (nearly) single-handedly carried the Cowgirls to a W.

But you can look at a smaller sample size and see her confidence at work, too. That seventh inning was a microcosm of how Show has evolved this season.

Despite facing the toughest circumstances on the biggest stage of her career, Show got first pitch strikes on each of the next three batters. That allowed her to work from a position of power — and it paid off.

It was as if John Lucas hung 60 on Georgia Tech or Justice Hill rushed for 300 and four scores to move past the Sooners. Your best player did everything you needed her to and you advanced because of it.

• The Pokes kick off regional play at 6 p.m. today against the Hahvard Crimson. Here are some comparisons to break down the difference in Cowboys and the Crimson.

How about this for a contrast? Oklahoma State next year moves its baseball operation to $60 million O’Brate Stadium. Meanwhile, in Cambridge, Massachusetts, the Harvard program plays its home games at O’Donnell Field, which looks like a high school facility and was built in 1898.

With a victory over Columbia, the Harvard Crimson emerged as the Ivy League Playoff Series champion and secured that league’s automatic NCAA berth.

Against a Harvard program that in 2008-17 had 10 consecutive losing seasons, Oklahoma State has to be considered a huge favorite — just like Virginia was a huge favorite over 16th-seeded Maryland-Baltimore County in the 2018 NCAA basketball tournament. [TulsaWorld]

Bonus points to whoever knows how to refer to an individual and group of players on Harvard’s team (the singular and plural form of “Crimson”). I suppose you could just call them smart human/humans but I’m curious.

• OSU and Mike Boynton find themselves on the right end of predictions for a five-star wing in the 2020 class.

Five-star Class of 2020 forward Cade Cunningham is the No. 7 player in his classification, a projected one-and-done superstar, an athletic freak … and an OSU lean.

This week the Montverde Academy product picked up four huge (yuge!) crystal ball projections from college basketball insiders who know people who know things — or directly know things. And all four picked OSU as their projected destination for the 6-foot-6, 215 pound superstar. [PFB]

When a buddy tipped me off about these predix yesterday morning – I double-taked the star rankings. Cunningham named OSU in his top-ten later.

• More on the Texas high school that felt Art Briles deserves a second chance – commentary from the Dallas Morning News was good too.

• This seems impressive – top amateur in the world and the top college golfer (two different guys) in the same year.

• Mark your schedules – Pokes are guaranteed at least one night-game at home this fall.

Liked this five minute-video on ways to give effective criticism – such a difficult thing to do.