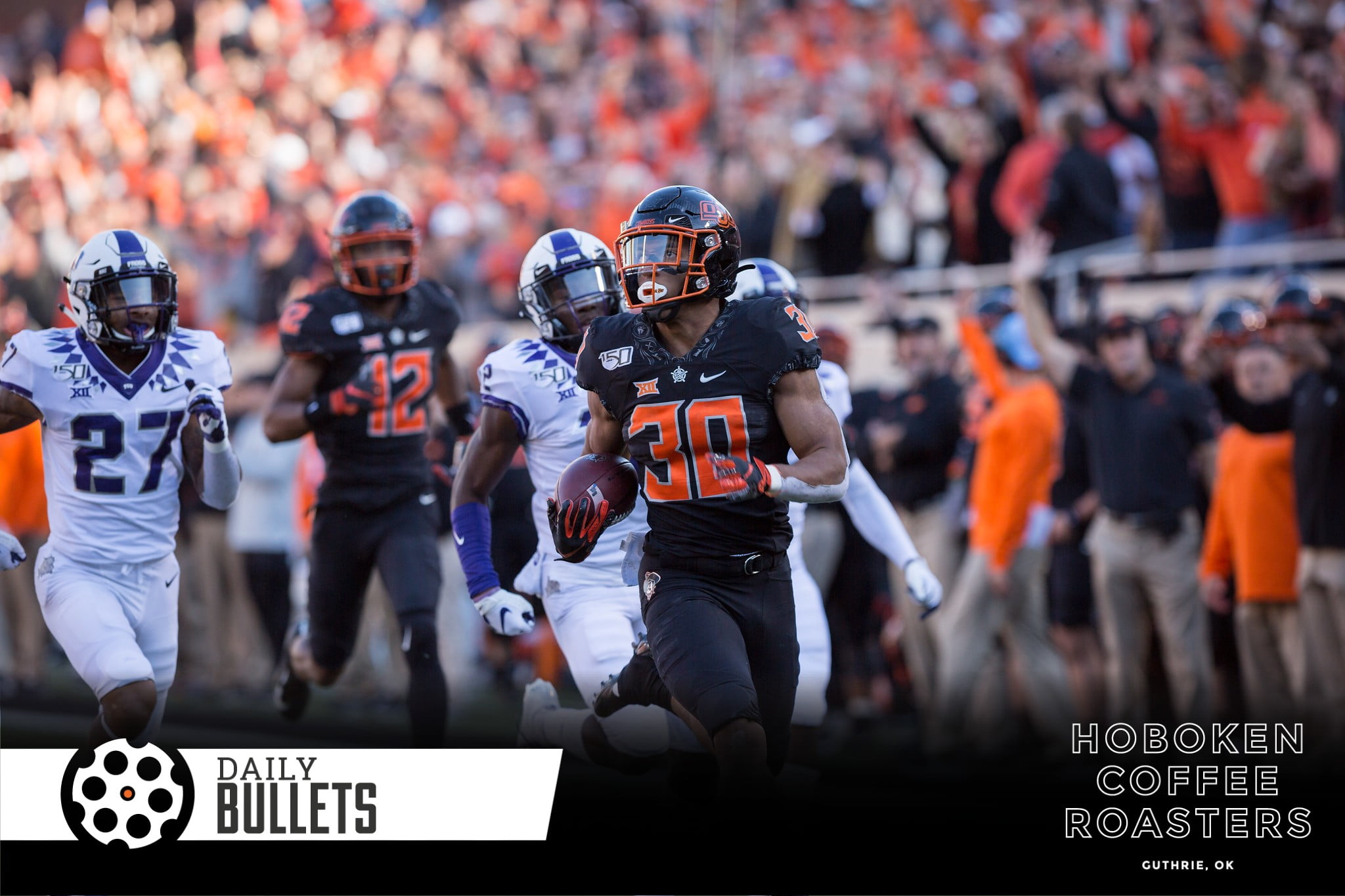 This overlapping window of basketball and football is a lot of fun – lots of OSU sports to consume.

• Efficiency numbers have OSU defense over the offense
• Cunningham’s effect on the fan base
• Chuba the third-best back at OSU?

• The 2019 Cowboys are an unusual breed for Mike Gundy’s career – defensively sound and offensively unspectacular from an efficiency perspective.

OSU has the ninth-best offense in the Big 12, using conference games and scoring efficiency. Ninth. The school of Zac Robinson and Brandon Weeden and Mason Rudolph has not maintained its offensive status in the first year of the Spencer Sanders era. And that’s OK. A learning curve is to be expected, and OSU has been much better than its last offense-rebuilding season of 2014. [NewsOK]

What a great point – this offense is much more capable than the 2014 offense and that’s who they should be compared to.

• Boone looks more at the effects of signing Cade Cunningham – particularly on the fan base.

With the posting of a minute-long Instagram commitment video Tuesday evening, (Cunningham)’s given a program a new ceiling. Oklahoma State’s program has hope. It has promise.

The last time you felt buzz about both programs may have been a decade ago – 2009 when Travis Ford looked like the answer and Zac Robinson was carving up defenses. But in this case, Mike Boynton looks like the golden goose and Cunningham is the golden egg that validates him.

• Bill Haisten looks at Chuba Hubbard’s place in the OSU pantheon of running backs – and he lands at a third-place finish with a possible tie with Terry Miller.

With four games remaining on the 2019 schedule, Hubbard leads the nation with 1,604 yards. On a single-season basis, he already has become the most prolific of all Mike Gundy-coached running backs. In 2008, Kendall Hunter ran for 1,555 yards in 13 games.

As the 2019 Cowboys are guaranteed a 13th game in a bowl, Hubbard is on pace for what would be a Big 12-record 2,317 yards. It would be the fifth-best total in major-college football history — and still more than 500 yards below Sanders’ 1988 total. [TulsaWorld]

I don’t think it’ll be argued much that Hubbard is Gundy’s best running back, but I’m sure there will be plenty of debate on Terry Miller/Earnest Anderson/Chuba Hubbard breakdowns.

• Fascinated by this ESPN (In$ider) 2021 mock draft that has Cade Cunningham at No. 1 and Isaac Likekele at No. 40 (early second rounder)

Well, look who is here in GIA…it's @B3thompson__ and his dad @StingrayRod of course! Getting chants of "We want Bryce!" Some signs with him and #CadeCunningham's name on them #okstate pic.twitter.com/YILyNTnaXy