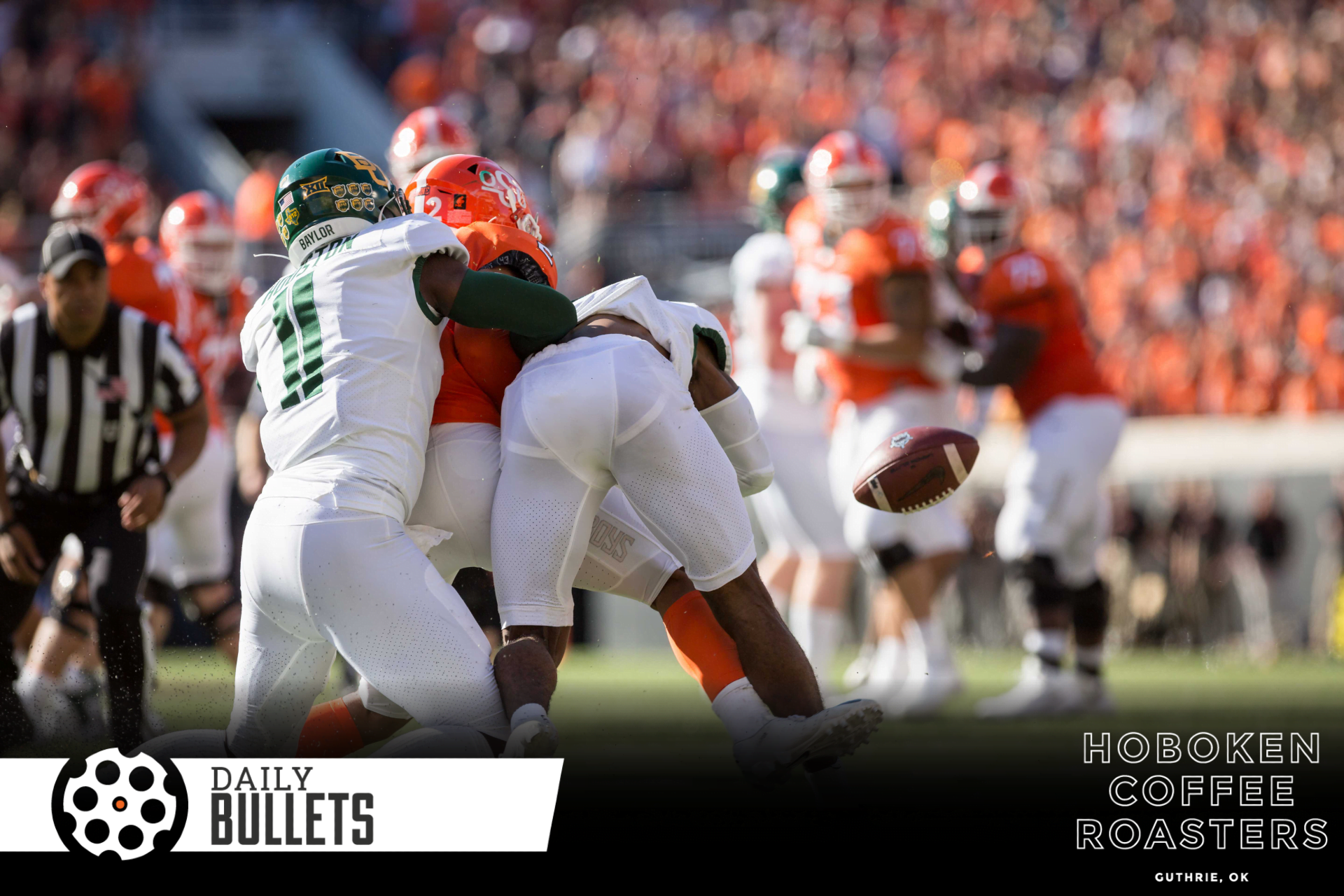 I’m wearing all black this morning.

So, what will become of this season?

Road games at Iowa State and West Virginia remain along with home games against TCU, Kansas and Oklahoma. Wins against at least two or three of those teams seem possible, but it’s hard to say that any of them are sure wins.

I normally chuckle at the “OSU will be lucky to make a bowl game” crowd. I don’t think I’m chuckling this year.

• Guerin Emig writes about how Spencer is at a bit of a crossroads himself.

He knows that. Youth isn’t an excuse, as Sanders himself realizes, saying: “A lot of people are like, ‘He’s a freshman.’ Nah. You can’t say that anymore. It’s my fault. I’ve gotta fix it.”

He’s the only one who can do that. Gundy and Gleeson can talk about drilling ball security in practice, can even try to game-plan to promote it, but this is ultimately on the player.

… So we’re back to Sanders playing through it, a kid who means well and wants so badly to do well, playing through the most trying stretch of his young career. [Tulsa World]

Listen, I’m going down with the ship if it goes down. But the last eight quarters have been rough.

Oklahoma State head coach Mike Gundy complimented and criticized the fans all in one postgame interview and I get what he is saying. The comments from some of the fans as they were rushing out of the stadium after Baylor converted the last touchdown in 45-27 come from behind win at the start of the fourth quarter was pretty brutal, most of it aimed at Gundy. He’s the leader of the program and over the years, despite his success, he has won some fans over, but alienated others. [Go Pokes]

This frames the entire thing to make it seem like people just don’t like Gundy because he’s Gundy. No, people are frustrated with Gundy for legit reasons because OSU is 10-13 in their last Big 12 games and 7-6 as a home favorite since 2017. That’s not reactionary, it’s a reality.

• Only six teams have a worse turnover margin than OSU right now. The names are not encouraging: UNLV, New Mexico, Rutgers.

• Here are my 10 thoughts on the game. And a notebook.

• This thread on Gundy — if you’re a PFB+ subscriber — is amazing to roll through. If you’re not a subscriber, you can become one here.

• Kyle Cox wrote about how OSU isn’t considering a change at QB.

• This is what won the dunk contest, which I hope is not foreshadowing of the season.

• A summation of the Kansas-Texas game! OSU, by the way, is a Texas FG from being tied for last in the Big 12 heading to the end of October.

Kansas coach Les Miles: "You think that people that leave the stadium will know Kansas? I think they will know that phrase. Kansas. It seems a little bit more now to me. Kansas."

• Here are those B12 records by the way. 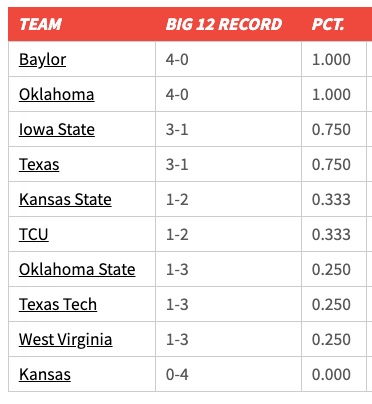 • This is pretty good.

• Loved this pod on Milk Bar. Show up and mean it is the best phrase.