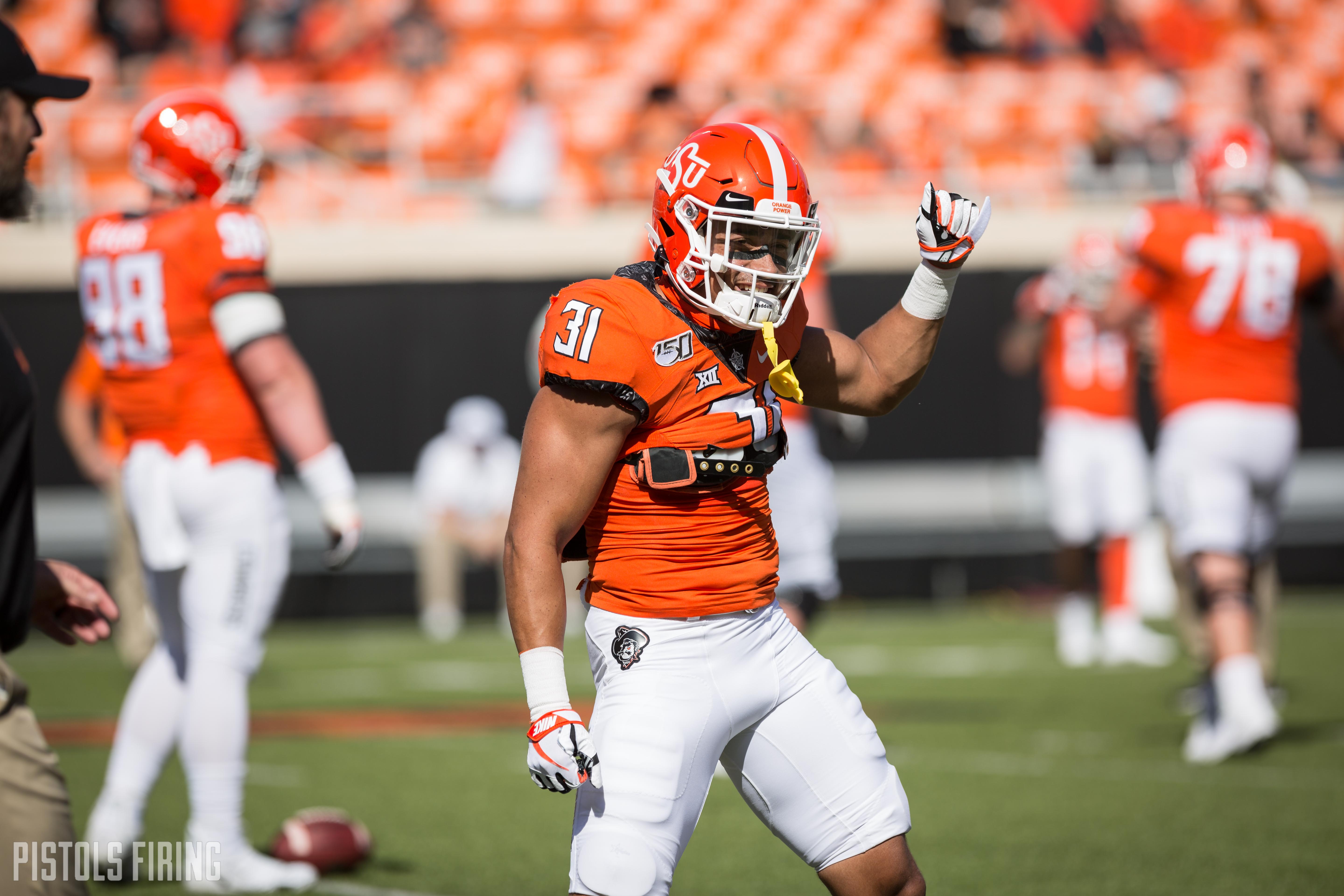 I emptied my 10 thoughts over here but wanted to take you through the rest of what I was about and jotting down during Saturday’s game.

• Trevor Lawrence has eight interceptions on the year. <— A thing I stupidly wrote before the game started when trying to make a Lawrence/Sanders comp.

• Nobody on the broadcast knew how to pronounce Chuba. Chub-ah. Chew-bah. We got every variation.

•  The helmets were lol good. Remember the orange helmets they wore in the J.W. Walsh era that looked like they picked out the decals at Chris’ University Spirit during The Walk? Yeah, these were the exact opposite of that. Best part of them was the OKLA. STATE on the back. Elite. I also thought the number font on the back was awesome. 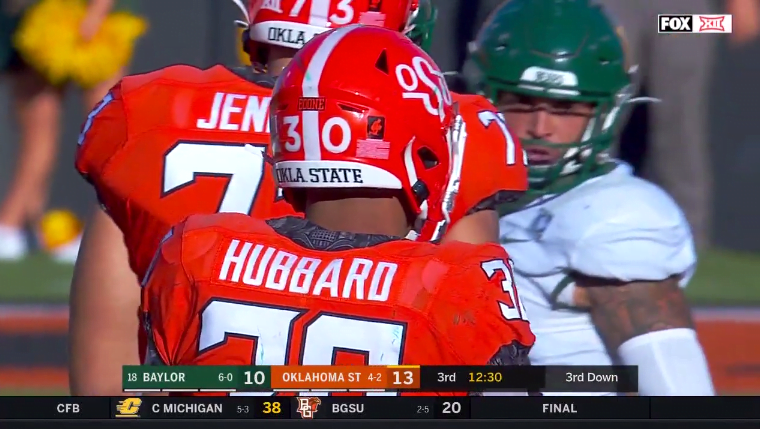 • Checking down to Jelani throughout the first half was amazing. Look at these target numbers.

• Lol at this. Gundy wouldn’t take his headset off so he had to change sides to hear the questions in the pregame. I was dying. 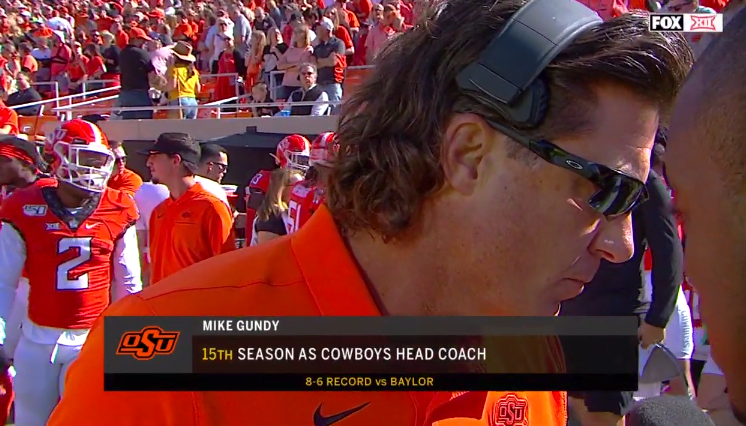 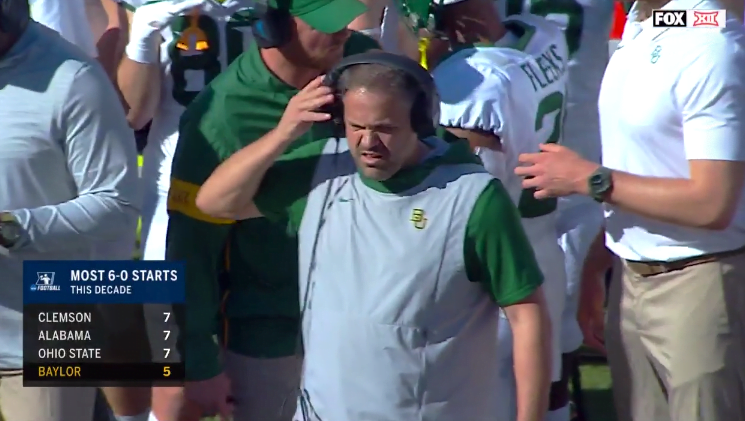 •  Remember when Charlie Brewer came in at the end of last year’s game for Jalan McClendon, and it felt like going from me to in-his-prime John Elway? I was stunned at how impressive he was. Didn’t change much for me this year. Not a Jarrett Stidham-level stud, but he’s great. Throwing it 17 times for 300+ helps. Here are the five previous 300-yard games against OSU that resulted in the fewest attempts.

• That fumble in the first half is about as close as it gets. I thought it was probably the right call to let it stand even if it probably wasn’t a fumble, if that makes sense. Like believing somebody is definitely guilty but letting them off because there’s not enough evidence.

• Carson texted that Cam Murray is his uni Heisman for Saturday. I do love some big sleeves and the neck roll on a big man as well. 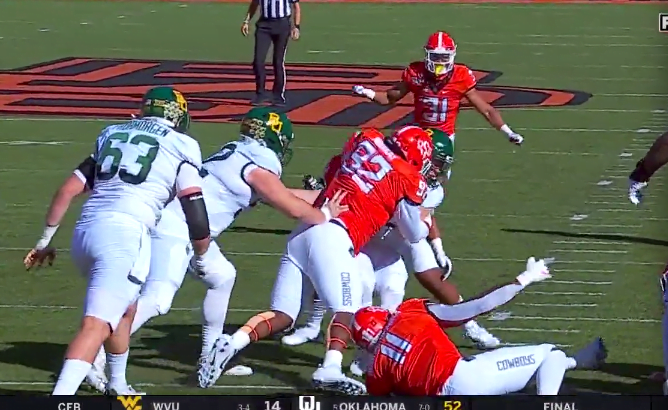 • Baylor was on pace for just 40 plays at the end of the first quarter and ended with just 54 — one of the lowest numbers of the Gundy era. So I guess the best thing you could have said about the defense at that time was that it wasn’t going to be tired by the end of the game.

• On one punt, Dillon Stoner waved his arm, caught it and went to a knee. Fair caught going every which way. Definitely Mike Gundy-approved.

• They rolled Sanders out to the wide side of the field — which sounds rudimentary, but I feel like they’ve been rolling him to the short side a lot.

• This cracked me up. 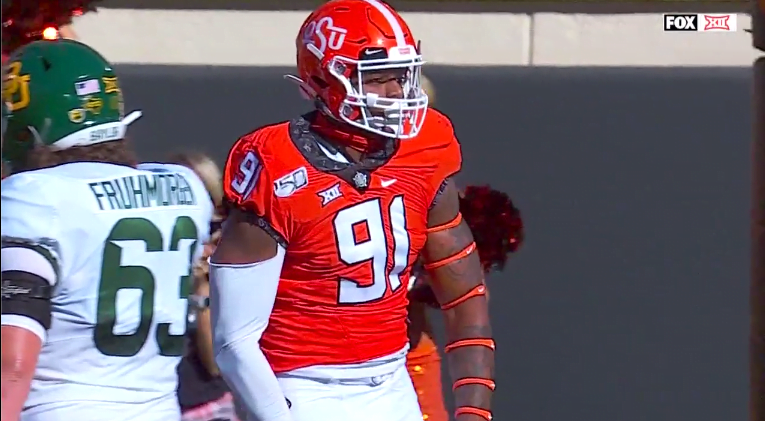 • I wonder if Gundy loves Tylan because he also wears a gold chain.

• Did I hear properly that OSU being up 13-7 was the biggest deficit Baylor has faced all year?!

• I thought Baylor got a LOT of calls go against them in the first half. maybe the weirdest one was the Hasty TD that got called back because of a hold. It was definitely a hold, but you never see it called in that context. Ever.

• The loogie hanging from Chuba’s face mask at the end of the first half was surreal. I couldn’t stop looking at it. Couldn’t bring myself to screenshot it.

• The INT at the end of the first half by Sanders was a really, really bad pass. Frustrating end to what I thought was a good half from him.

• Tylan got abused all day, I thought. This catch is just hilariously good. I know we’re used to it and everything, but his talent remains unusual. Recruit. More. 4-stars.

• LD looks elite for exactly (but not more or less than) one play a game.

• Baylor WRs can GO. They’ve always had horses, but boy. If they got a step on A.J. or Rodarius, it was ovah. 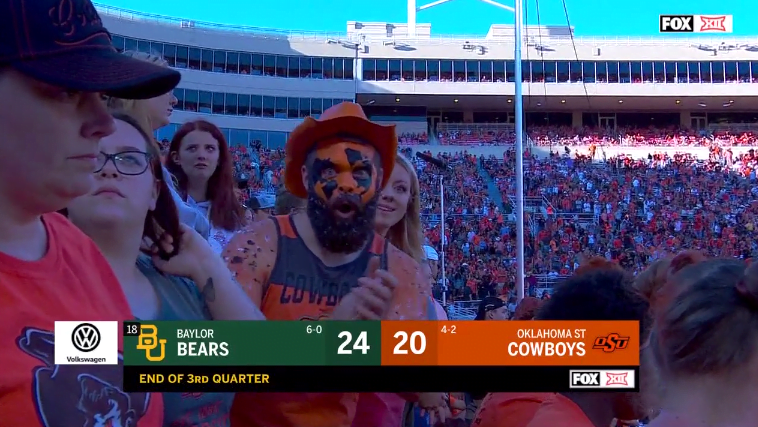 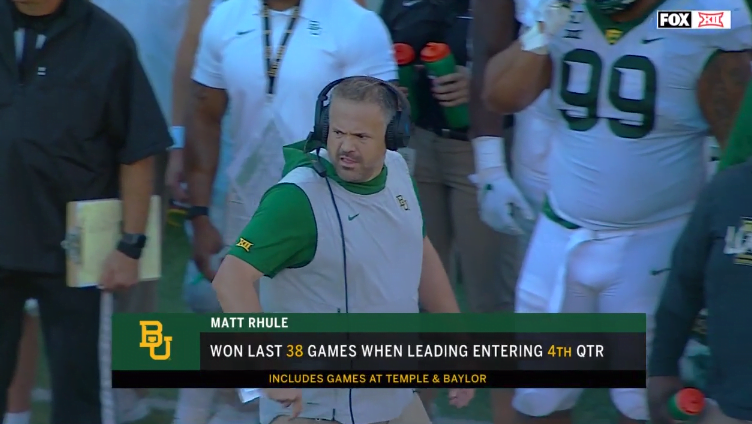 • How will the spring QB depth chart shake out between Illingworth, Hutton, Sanders and Costello? Should be interesting.

• Looks like Chu added a spin move in the bye week. A nightmare.

• What if I told you OSU’s defense would hold teams to 6-for-35 on third down over three games in September and October and go 1-2 in those three games?

• LD doing the track finish across the goal line was the best “hits on one carry over 20 yards” moment.

• Baylor struggled when the field got shorter, like OSU early on in the season. Of course when you score on three plays of 25+ yards (and should have scored on another), the field rarely gets shorter.

• Brando’s favorite phrase is, “so, so subjective” which was both hilarious and true. I liked this broadcast team, and I love the pregame and halftime guys. They’re the right amount of fun and serious. Good chemistry. Seem to all care. Stone is an elite director of traffic. Can go against any ESPN crew.

• This is pretty clever. 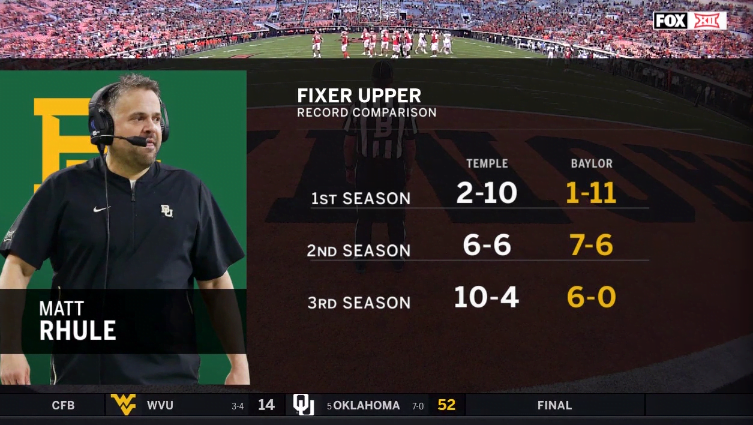