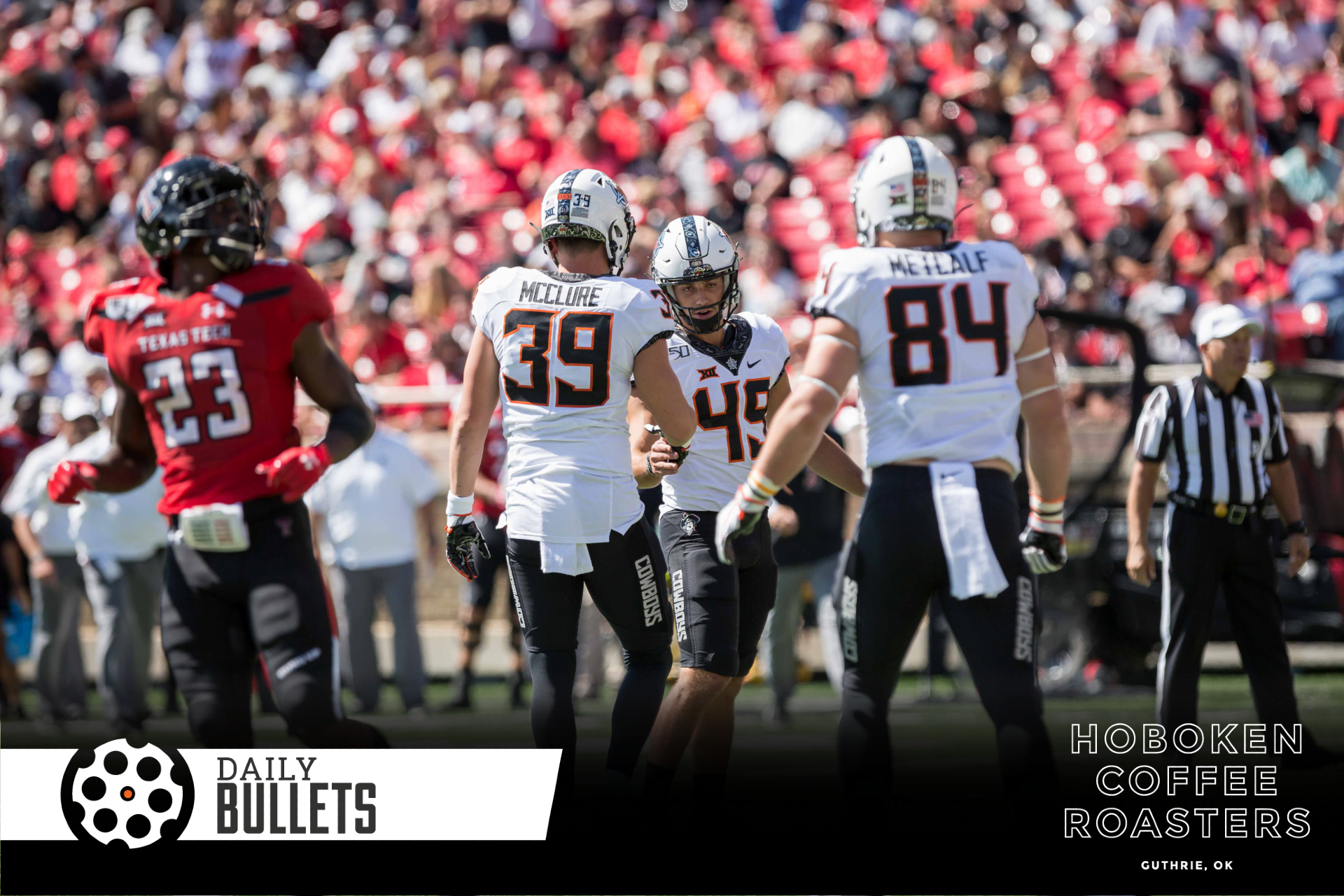 I don’t know if the commentary from everyone is enjoyable after a loss, but boy it’s a hell of a lot more entertaining.

• Blah, blah, blah
• KB goes in on Gundy’s past few years
• Sanders puts it all on himself

• Bill Haisten lights it up from Lubbock.

Nothing positive can be spun from this debacle. Sanders was intercepted three times and lost two fumbles. Against Arizona and Oklahoma, the Red Raiders had a total of three sacks. They sacked Sanders seven times. I was aware of what was said during OSU’s postgame news conference, but this really is what I heard: “Blah, blah, blah.” [Tulsa World]

Whoo boy. Not wrong either!

• Kyle Boone goes in on Gundy and does it both smartly and tastefully. I really enjoyed editing and reading this.

Oklahoma State was once a gritty program that showed up every game under Gundy — as underdogs, as favorites. It made no difference. But Oklahoma State the last two seasons is no longer the tough out it once was. Maybe it’s a lack of leadership. Maybe this game will wind up being a blip on the 2019 season’s radar. Maybe, just maybe, Mike Gundy’s lost his fastball. [PFB]

• Spencer took all of the blame and more in Saturday’s loss.

Sanders and the offensive lines struggles’ didn’t allow OSU to make the big plays it’s known for. Sanders is extremely tough on himselfm but he plans to put this performance behind him and make sure he doesn’t make the same mistakes.

“I’m always 10 toes behind these guys,” Sanders said. “No matter what battle or war we go through. Even if they’re wrong. I’m gonna fight until you put a bullet in my head. That’s my team.” [O’Colly]

Always impressed with how Spencer Sanders (@SpenceSanders) owns how he plays whether it be good, bad, win or loss. #OKState pic.twitter.com/aFl68GclWd

Listen, I appreciate the sentiment, and this is what I love from QBs, but I think there’s a more even-keeled way to go about it than maybe he’s doing. He’s emotional, which is fine, but OSU needs to have a long-term plan going forward for his trajectory.

On if he ever considered going to Dru Brown: “No because we thought we were having some protection problems. I want to say the first two interceptions were based on protection issues. If that’s true, it’s hard to blame (Sanders). I might watch the tape and see differently, but that was my gut feeling.” [PFB]

I guess I agree. My reasoning would have been more for Sanders’ confidence than anything else.  I’m saving the receipts on all these replies. All of ’em.

#okstate The best thing Mike Gundy did today was not benching Spencer Sanders. If Gundy switches QBs, seeds of doubt are planted. Sanders’ confidence could be shaken. Every quarterback has a day like this. Robinson, Weeden and Rudolph all had days like this.

• For those of you who say Rudolph never had games like this. The memory, it is short. Here’s that at WVU box his sophomore year.

• Robert Allen says we should give Texas Tech credit. It’s pretty on brand, but it’s also not untrue, at least defensively.

Sanders is a competitive son of a gun. He didn’t mope. His second-half fumble, when the Cowboys were threatening to get within six points, could have sunk OSU. But after Sanders’ mad-dash 20-yard scramble on fourth down, the Cowboys were within a 2-point conversion of making it a one-possession game with 3:27 left and three timeouts remaining.

This was a game the Cowboys had no business winning, with a quarterback committing five turnovers, yet they still hung in there. That’s apparently what this season is going to be about. Hanging in there with a quarterback who should be much, much better in the future. [NewsOK]

I think this is where I’m landing in the aftermath. Not going to lose my mind after six games, but I certainly want to see some growth down the stretch.

• A book I helped write came out on Friday. If you’re struggling with grief or sorrow, you should get it. Or let me know and I’d be happy to get you a copy.

• Happy first birthday to the little church we started.

• I had Brendan Porath on my golf pod on Friday, and we had a blast talking about the Ryder Cup, Phil Mickelson and Viktor Hovland vs. Matthew Wolff.

• Bryan Curtis is always must-read but especially so on the SI mess.