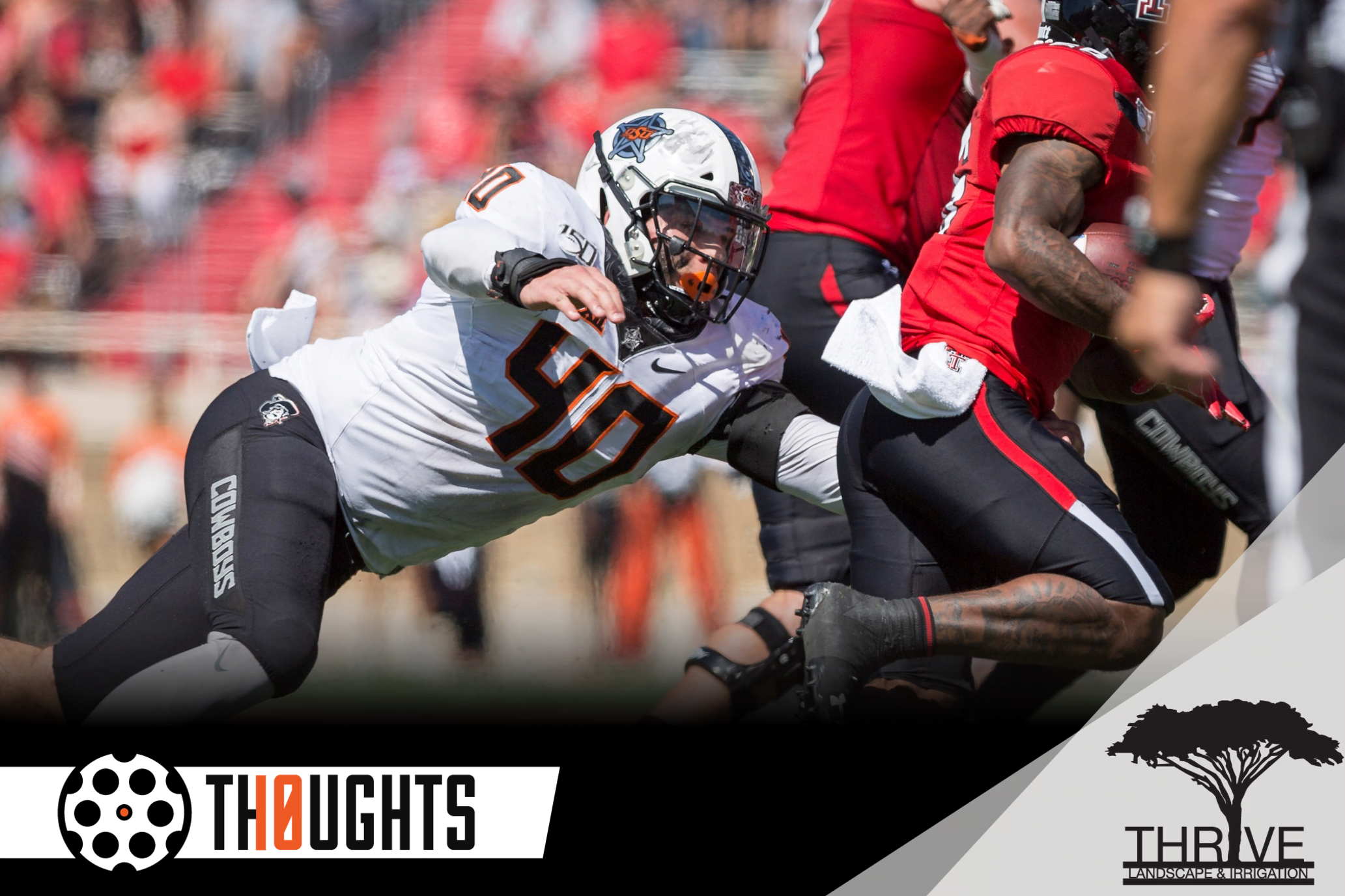 Where in the world should we start here?

Chuba Hubbard rushed it 34 times for 156 yards and 3 TDs, and Tylan Wallace added 11 catches for 85 yards. Jordan McCray (my dude) and Dillon Stoner combined for 158 receiving yards as well.

OSU’s defense played well in the first half before succumbing in the second as Jett Duffey took the belt from peak Aaron Rodgers and lit the world on fire. Duffey’s final line was 26-of-44 passing for 424 yards and 5 total TDs. It was his second career game of more than 200 (not a typo) passing yards. TJ Vasher led the way for the Red Raiders with five catches for 110 yards.

We have many (MANY!) things to discuss, but before we jump into it a big thanks to Thrive Landscape and Irrigation in Stillwater for sponsoring the 10 Thoughts for the second consecutive year. Unfortunately for Thrive, they have not sponsored two straight Big 12 wins in a row yet.

1. Let’s Have an Honest Conversation About Spencer Sanders

OK now let’s have an honest conversation about Spencer Sanders.

He was lousy on Saturday. Horrendous. His worst game, which followed his previous worst game, which gets at my primary point here. The part that concerns me most is that he doesn’t seem to be getting better. You could argue that his trajectory has actually gone the other way and he’s been getting worse since that first game against Oregon State (minus a couple of electrifying plays against Texas).

Undergirding all of this is that he didn’t do the little things well. He ran out of bounds when he should have thrown it away. He didn’t protect the ball when he knew his line was struggling. Little mistakes compound big ones until the entire thing ends with you under a Gatorade towel on the bench. 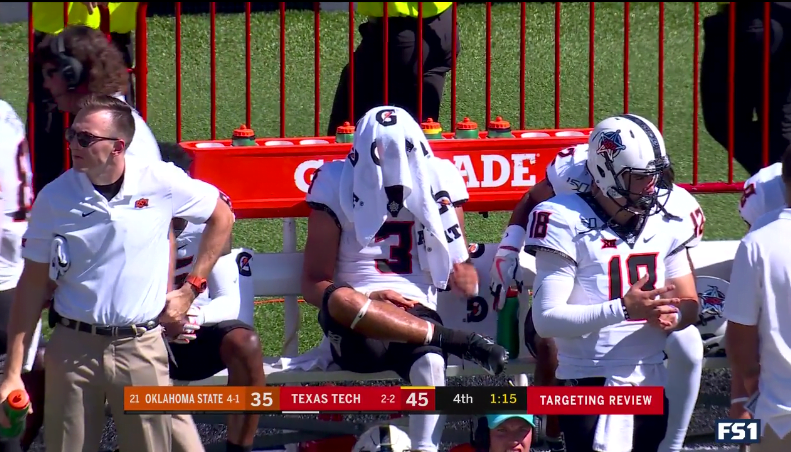 Eject from the bandwagon at your own risk though. Mason Rudolph tossed 11 picks in his first nine games (didn’t see that stat coming) as the starter. Sanders has thrown eight in his first six thus far. If he throws one in each of his next three games, he’ll still only have matched Rudolph’s INT work in his first nine outings (Rudolph only threw 15 in the next 33 games though).

Again, it’s easy to forget that he’s a freshman in his sixth game. I also think this is the last game we get to say that about. He has a year and half a season under his belt at OSU, and now — with how he’s looked the last few outings — the second part of the Big 12 season has become a lot more important for his future than it was just a few weeks ago.

2. I Didn’t Envision This

Speaking of things I did not see coming … OSU going down 20 against an institution they have essentially been a minority owner of for the last decade is not a thing that I foresaw on this bright and sunny Saturday.

Even after the first few drives, I was running around yelping about how OSU was going to win this game by double digits because, well, that’s what Oklahoma State does against Texas Tech. Except for two straight years, that’s not actually true (that ain’t true).

Maybe there’s a bigger picture #narrative in there somewhere — and we’ll talk about Gundy at the end — but also maybe the note on all those one- two- and three-point wins in the last five years with multiple future pros involved is finally due, and OSU doesn’t have the resources to pay it.

They’ll have to wait at least another three weeks before they can break a 24-month spell of not having won two Big 12 games in a row (a real stat — it’s been since October 2017 when they beat Texas and WVU consecutively).

Since 2010, college football teams are 6-85 when turning the ball over five or more times and not turning the other team over a single time. None of the six wins were against Power 5 schools.

My 10th thought last week was about how much tougher OSU is this year. That might still be true, but it’s hard to know when you give five free possessions to the editorial staff of Pistols Firing Blog, much less a FBS school with a competent coach and a quarterback playing out of his id.

OSU is also now 1-9 in the Gundy era when turning it over five or more times, with the only victory coming in 2010 against Troy (in a near loss!). 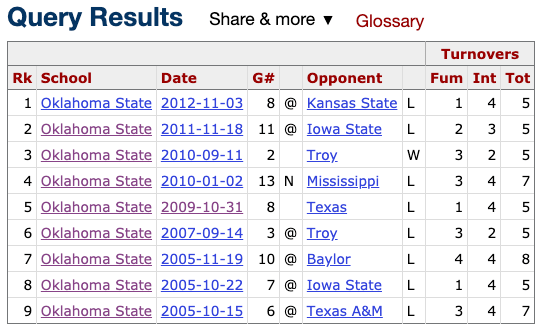 OSU’s offensive line will escape criticism because Sanders looked like bad Donovan Woods for much of the game, but they shouldn’t. They allowed seven sacks, 14 tackles for loss and four QB hurries. In a season where it’s been a consistent two steps forward, one step back, OSU may have finally reversed the trend. It may now be one step forward, two steps back with the harder part of the slate still to come.

I’ll actually defend a defense that gave up 45 to a team that had scored 30 total in its previous two games. First, they took on 18 (!) Texas Tech drives. That they only gave up 45 is actually kind of a feat. They also kept the game within two scores for most of the last 40 minutes, even though OSU’s offense was playing like it wanted to get run-ruled.

Sure, Jett looked like Tom Brady for stretches in the third quarter, but that was less about what OSU was doing and more about him putting pigskins in windows the size of salad plates. Let me reiterate: This was somebody who had hit 191 or more passing yards in a game in his career just one time. Taylor Martinez South, nine years later.

After posting a 1-13 third-down rate against Kansas State last week, the Pokes’ defense backed that up with a 2-13 performance this week. So 3-26 for opponents in the last two weeks against a team that we have seen give up third-down conversions like they’re handing out free flyers for Lights Over Stillwater outside the Student Union. This is good.

The only complaint I have about the defense is a lack of turnovers. They just don’t do it. Jim Knowles teams just don’t turn teams over like Glenn Spencer teams did. Facts only.

The only thing we’ve ever wanted is for OSU’s defense to be average to above average in Big 12 to let the offense put teams in the dirt. Then we get it, and the offense stays on the bus. Don’t blame Knowles’ side for that.

I mean, whatever in a loss, I guess, but he’s a monstrosity. The final drive in the first half was a “get the hell on my Canadian back and I’ll drag us to paydirt” drive from him in which it felt very much like he might get all 45 carries in the second half.

He didn’t, but at 1,094 yards on the season, he now has the 21st-best season in school history and one of just 24 seasons in which an OSU back has put up 1,000 plus. Oh, and the year isn’t even halfway over. But keep talking about Jonathan Taylor against Kent State. 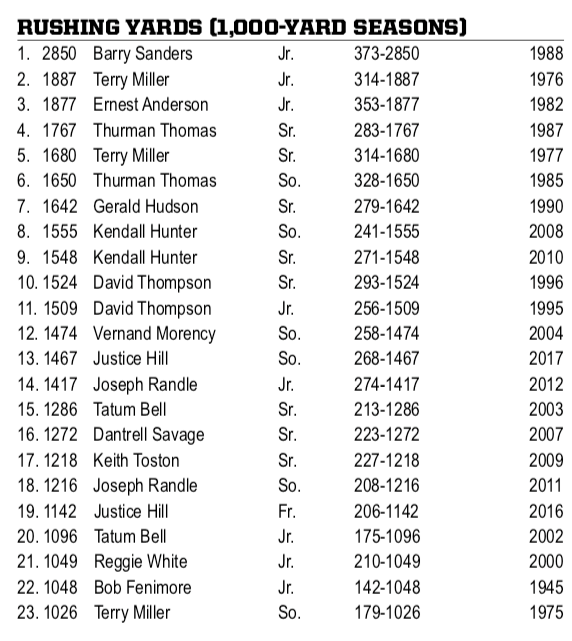 Without any context whatsoever, here are five things I loved about Saturday’s game as a contrast to all the anger!

• Jordan McCray (aka the best hair in CFB)
• Braydon Johnson (get him more involved!)
• Trace Ford remains a freshman!
• The FG attempt by Tech that came up 10 yards short!
• Those pushups!!! 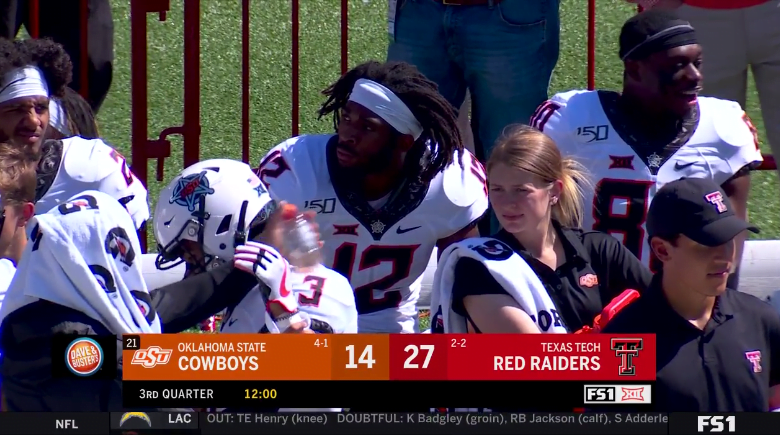 Tom Hutton? Not great! Not time to call Australia and ask for Mason Cox and cash considerations back in return for Hutton, but he only put three inside the 20 and only averaged 36 per punt.

No big deal, you’re thinking, because it’s punting. But field position matters. Tech started on average on its own 36, and OSU started on average on its own 29. But if you take the expected points scored from each yard line and multiply them out by 18 drives, you get four points, which would have made quite a bit of difference on what that last drive from OSU actually meant.

Here’s a look at OSU’s record under Mike Gundy as a favorite since he took over in 2005.

There are a billion reasons why this might be true. Maybe professional quarterbacks really do cover a multitude of sins. Maybe OSU is seeing the other side of luck when it comes to close games. Maybe turning teams over really is the answer in the Big 12. Or … maybe they aren’t as dialed into the details as they used to be.

That’s natural over time, right. I still care a ton about PFB. But it’s impossible for me to care as much about as I did in 2012 or 2013. I was obsessed with every single little detail back then. Now? I care about its general success, but I’m probably not as locked in as I should be because I know I can get away with it (why am I typing this out loud?) …

10. Let’s Have an Honest Conversation About Mike Gundy

I’m a Gundy homer. Have been, will be. It is what it is. He’ll probably always be the ? OSU football coach just because of his longevity and because he won a conference crown and all the million reasons you could come up with over the last decade and a half.

But that record above? Where OSU has nearly as many losses as a favorite in the last three years as they had in the first 11? That’s on him. Drape him in a robe with those numbers plastered all over it and lead him into Boone Pickens Stadium as homecoming king in a few weeks. You can’t change reality.

And all of a sudden — after a decade of OSU being a nasty out and a team that does all the little things right because it has to — the tide has turned a little bit on him. They didn’t do the little things last year. He said that changed. Maybe it has, but I’d like to see an entire year’s worth of games in 2019 before drawing that conclusion.

Every game in a 12-game season is a piece of a bigger story. And that bigger story is one that a lot of fans in Gundy’s world have not enjoyed consuming. If you lose to OU and Texas, people will give you free passes (on the field, not in recruiting). But once you start cranking nine-win seasons, it’s tough to go back to losing to the Texas Techs and Iowa States of the world.

Sanders isn’t the only person in OSU’s organization for whom the second half of this season looms fairly large. His position coach’s boss is right there as well.