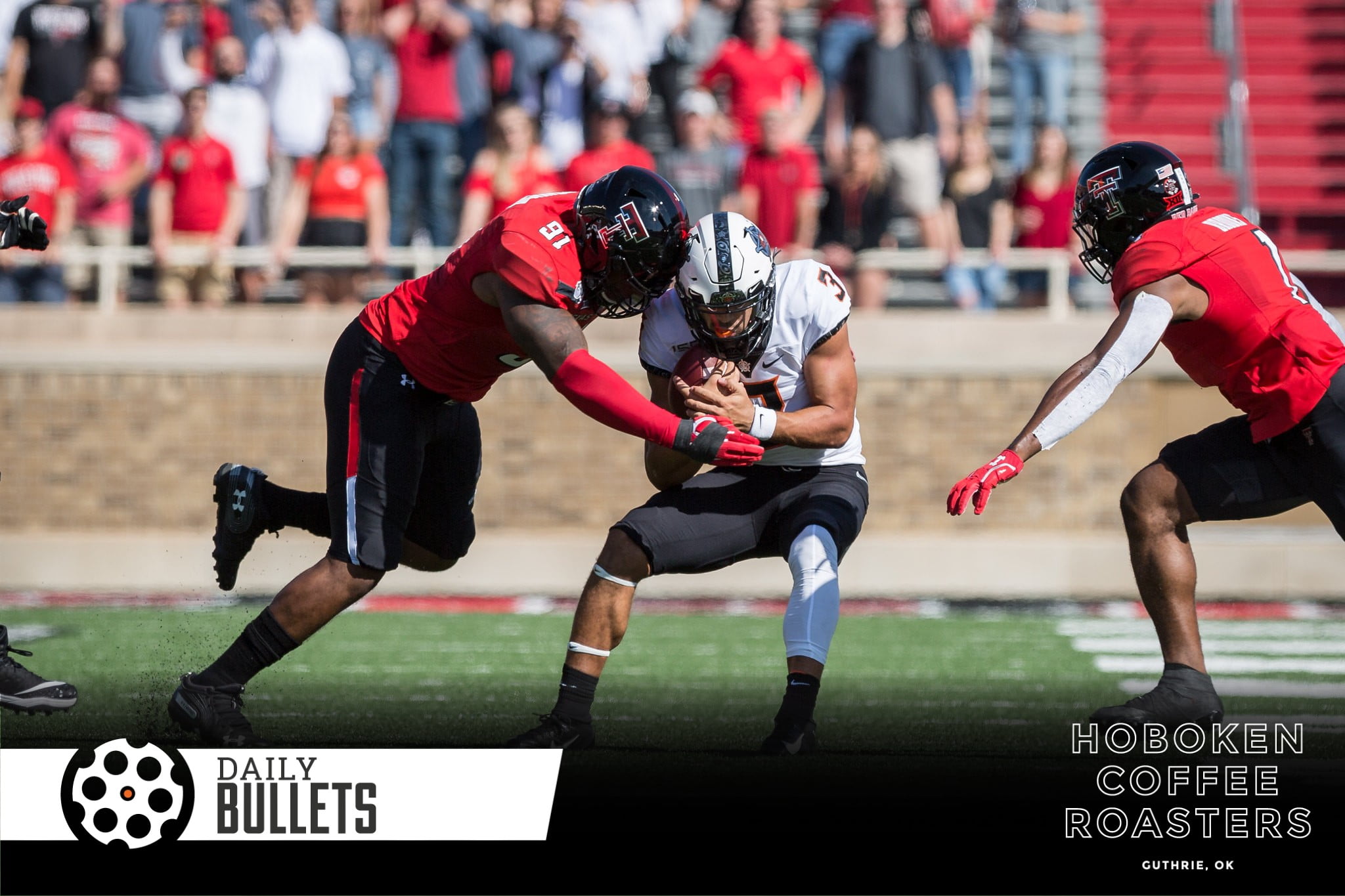 It was one of the more unnerving moments in sports watching Mason Rudolph go down but good news last night that he was able to go home.

• While there are two distinct schools of thought on what to do about Spencer Sanders after a terrible game, Mike Gundy’s onto the right process.

“Even if (Sanders) is to blame, then he has to learn from mistakes and develop as a young player,” added Gundy. “If he leans or relies or puts everything out there on games we’ve already played, that would make for short careers for quarterbacks, particularly young.”

Nobody wants to remember any of this because we love to retrospectively lionize former QBs, but Sanders’ game against Tech is a game plenty of other OSU QBs have had. Even the great ones. [PFB]

A buddy pointed out that 25 percent of this list consists of Al Pena-games but seeing legends on that list does help put one (truly awful) game into context of a career.

I think it felt a lot worse because we watched a replacement-level starter in the Big 12 look like Russell Wilson and throw four touchdowns. It’s not a fun comparison of Saturday-Jett Duffey against Spencer Sanders.

I think it’s best to put down the pitchforks and give Sanders some more time.

• Speaking of Spencer Sanders, there comes a point when other teams are able to strategically gameplan against a young quarterback.

But as a season progresses, and teams gather video, coaches find areas to exploit, particularly with young quarterbacks. Saturday, the Red Raiders were ultra-aggressive early on defense, blitzing and attacking Sanders and the offense.

Of OSU’s first 22 snaps, seven went for losses, including four sacks. The Red Raiders finished with 14 tackles that resulted in 54 yards of losses. The offensive line had trouble adjusting, as did Sanders. [GoPokes]

• Depending on how the Pokes look at homecoming against Baylor and play against TCU later in Stillwater, the Cowboys are headed for an 0-4 finish for the Texas “state title”.

OSU lost respectably in Austin. This display in Lubbock, however, has to be chilling for Cowboy coaches and fans. [TulsaWorld]

I like to be glass-half-full but if the greatest indicator of performance is past performance, the display in Lubbock doesn’t inspire confidence. While Baylor looks better this season, they don’t look unbeatable and a four-score loss to Iowa State over the weekend (and a September loss to SMU) makes TCU look like one of the surer bets for a win on the schedule.

• I don’t know if Gundy and Doug Meacham (Cowboy alum, former assistant coach) had a falling out, but I’d have no problem with him coming back as OC at some point.

Not a call for Gleeson’s head BTW – just an observation.

Doug Meacham left at the end of the 2016 season. https://t.co/VxCFBKAsZs

• I’ll cosign on the below – in the age of the Playoff, it’s hard to feel like conference championships mean a lot… especially since they’re not a ticket to the playoff.

• Saw this sci-fi movie last week – nothing if not thought-provoking. This faith-based review helped clarify my thoughts, I’d recommend it if you’re into space movies.