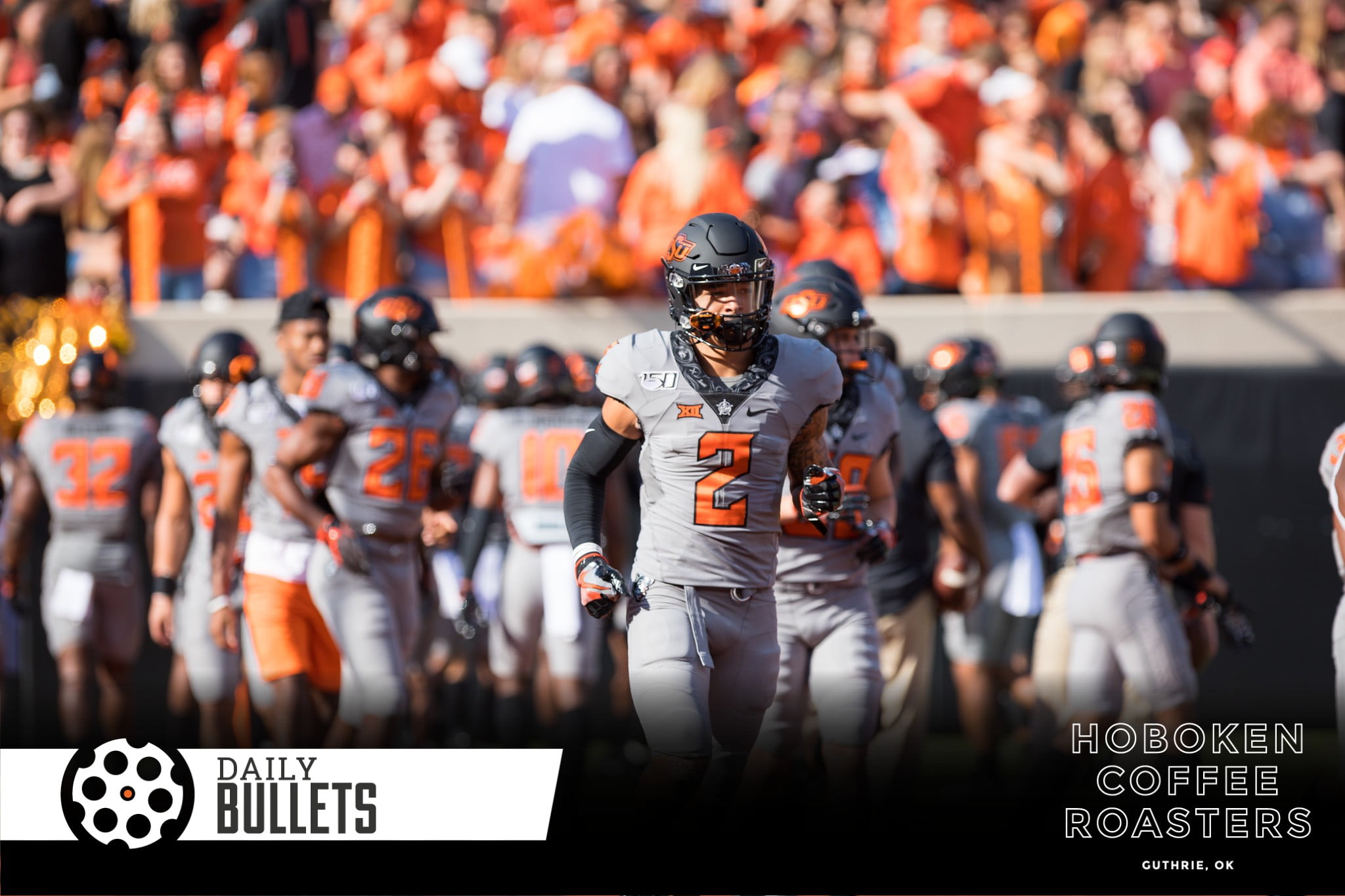 Sign me up for the prime time kickoff in Austin next week.

• Love this look from Coach Boynton – showing up at the first possible minute to see 2020 super recruit Bryce Thompson.

Boynton stayed up late Sunday night to make sure that he got who he wanted to see first, and first he was. Corey Evans of Rivals noted Monday morning that OU coach Lon Kruger is expected to make an in-home visit with five-star Booker T. Washington guard Bryce Thompson, and then issued this hilarious follow-up: Boynton was there first. [PFB]

To the best recruits in the sport, the brand currently doesn’t bear the weight of the bluebloods in the sport. But – it does have enough cache associated that it gives merit to somebody working their tail off to be there.

You have to assume Boynton was home napping at this point:

Bill Self, Lon Kruger, Shaka Smart all in Tulsa today to catch up with @B3thompson__…

The chair between Shaka and the others cracks me up.

• Porter has Viktor Hovland as his rookie of the year on tour – and he’s probably not alone with that.

Best Rookie — Viktor Hovland: This one is less close than the best player one. Hovland is anywhere between the 10th and 50th best player in the world. He’s potentially a top-five driver of the golf ball and was unbelievable in his first go-around on the PGA Tour. It’s kind of unfair that he still gets to be a rookie given that he played in nine PGA Tour events — including two majors — but he should cruise to the Rookie of the Year award.  [CBS Sports]

• James Washington had a great catch on Sunday – and this writer needs to chill on the negativity around him.

The receivers alongside (Juju) Smith-Schuster, who hobbled off late with an injury, looked even worse. James Washington, who lost the competition for the no. 2 job to Donte Moncrief, had one catch for 45 yards on a deep pass—Pittsburgh’s best play of the night—but the second-year receiver’s inexperience showed when he inexplicably veered out of bounds untouched. [TheRinger]

The angle of the piece was clearly negative – titled around the Steelers not recovering well from losing Antonio Brown – but I think part of that is the offense going stale with Big Ben and the clear downgrade from Le’Veon Bell to James Conner.

Regardless, that 45-yard catch was sure purdy.

.@JamesWashington showing off his speed on the outside 💨

• According to the S&P numbers (a football-metric), the Cowboy offense has mostly met the high expectations established in the preseason.

The expectation in the numbers was the seventh-best offense in college football and they’re currently the 13th – not bad at all.

Side note – could you imagine the expectations communicated in an interview for an offensive coordinator? “Hey, I know you haven’t really had a scholarship player to coach at this point in your career but you’ll probably need to have a top ten offense here to meet expectations.”.

• It caught me a bit off guard to see Logan Carter on here with the best grade for a Big 12 tight end this week – this Jelani/Carter pairing may be underrated.

The Big 12 Team of the Week in Week 2 was headlined by a strong offensive performance from Kansas State! ⬇️https://t.co/8Yq2m1n8TQ pic.twitter.com/zsUgF4Udrk

• Being stuck is reasonable

• Given all the Antonio Brown nonsense over the weekend, this story made me a Julio Jones fan

I couldn’t stop watching this fun interaction between these baseball players.

After all the Antonio Brown madness this is a welcome reminder of the goodness in sports pic.twitter.com/IXGu4UHNd1