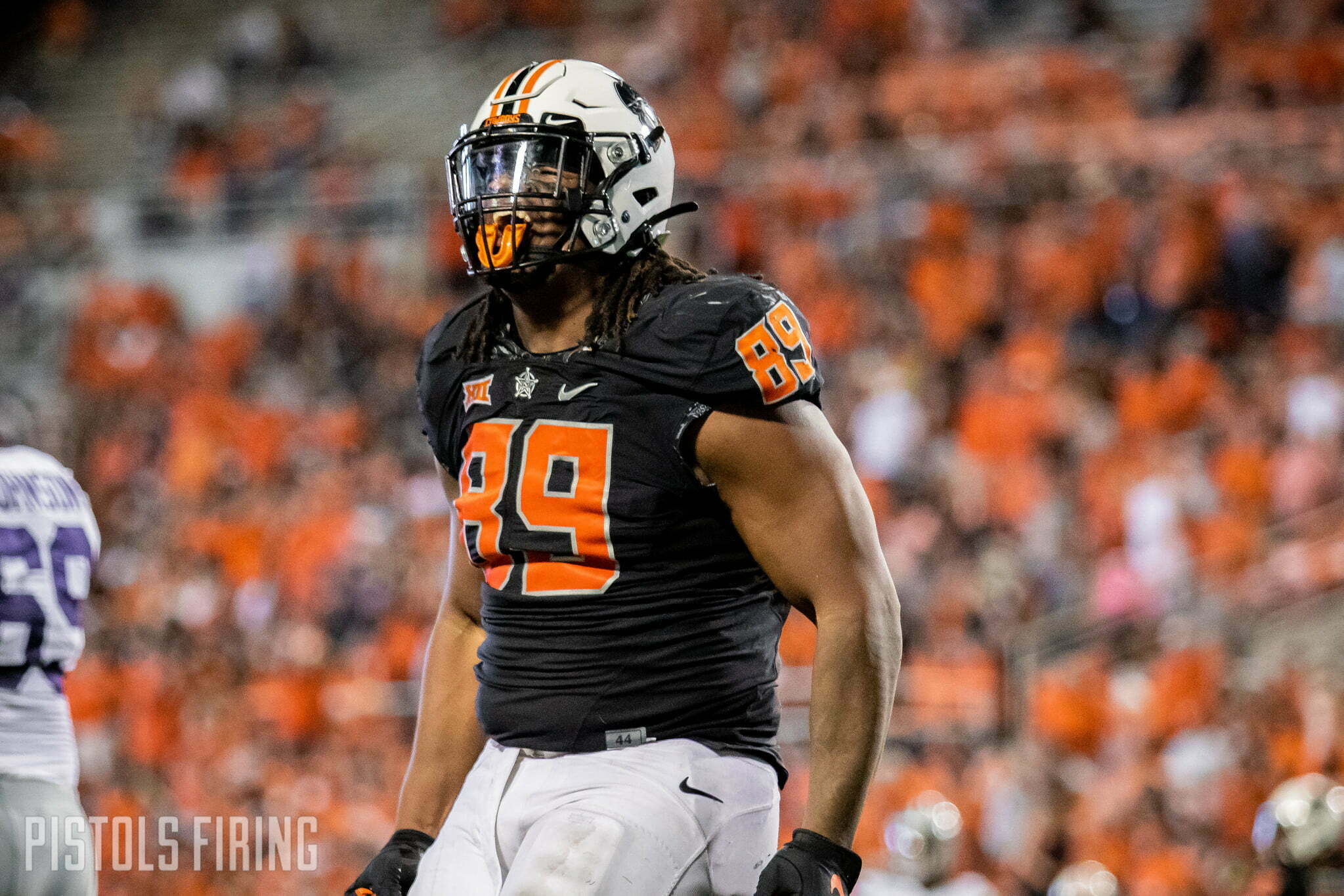 The 5-0 Cowboys may be enjoying a hard-earned bye week, but one group of Cowboys earned it more than any other.

OSU’s defense has been carrying much of the load thus far in 2021, and the stellar play from Jim Knowles’ unit is a huge reason the Pokes are yet unbeaten.

Earlier this week, Gundy recently predicted a 2-3 start had it not been for a stout showing on that side of the ball.

“I don’t think there’s any question that we would’ve not won at least three games we’ve already won if they weren’t playing at an extremely high level,” said Gundy.

So now nearly halfway through his fourth year in Stillwater, I thought it would be a good time to take stock in Knowles’ on-field product and how it compares to his first three, as well as the rest of the Cowboy defenses under Mike Gundy.

Let’s look at some numbers through five games compared to Gundy’s first 16 years at the helm.

There’s a lot to unpack, but here are my thoughts.

With the caveats that scoring defense alone doesn’t always present a clear picture of how good a defense is (more on that below), and that it represents just two Power 5 offenses (more on that further below), the Cowboys are allowing just 18.6 points per game. That’s good for No. 30 nationally, and it’s the reason the Cowboys have remained unscathed while only hitting the 30-point mark once in five tries.

Total yardage allowed is in the fine range, but it’s also a number that is likely to go up and represents just a part of the picture defensively.

They’re Takin’ It Back (At Times)

The Cowboys were plus-1 in turnover margin before Spencer Sanders’ three interceptions against Baylor. The defense has been good, not great at forcing TOs, which is lower middle-of-the-pack in Big 12 terms to this point in the year.

Turnovers can be fluky. At the least, they can be largely predicated on luck. There’s no doubt that some teams can be really good at dispossessing an opponent (see 2011, 2015 above), but that’s not this defense’s strength. More a tool in its repertoire.

In 2020, OSU ranked No. 1 nationally allowing conversions on just 26.5% of teams’ third-down attempts, and the Pokes are trending nicely in that column so far in 2021.

“Well, Coach (Jim) Knowles and his staff, they deserve a lot of credit,” said Gundy of his team’s stopping power on third downs. “We’ve talked about this a number of years since he’s been here, he’s been impressive to me as far as changing style of play to fit this league.

“We’ve been good at what we do. Everybody knows we’re a high-risk defense. We take a lot of chances, and at times you can get beat up on it. But, it’s worked for us so far.”

The good news is that this stat, unlike some others on this board, is less likely to get blown up once the competition stiffens. The number will likely raise, but it’s not as volatile as, say, points per game when transitioning from Tulsa to Iowa State. To that point, OSU has been much better against its two Big 12 opponents (holding them to 18.5% on third down) than it was in the nonconference (36.2%). We’ll see how that holds moving into October and November.

The final two columns are OSU’s points per drive (PPD) allowed as well as its national rank in that category as cultivated by the great folks at BCF Toys. It’s a stat you’ll recognize if you’ve been with us for long, but, briefly, it amounts to points a defense allows an offense to score each time it has the ball while adjusting for end-of-half and garbage time possessions.

Basically, it correctly answers the old SEC vs. Big 12 argument from a few years ago. A team defending 14 possessions will allow more points than one defending eight. It’s a much better indicator of a defense’s ability to prevent scoring than points per game, especially when comparing different styles of football.

In this category, the Cowboys are pacing for rarified air under Gundy, allowing just 1.29 points per drive good for No. 13 nationally. If this metric were to hold over the next 7-plus games, the 2021 defense would finish behind only that vaunted 2013 squad in both national ranking and PPD numbers. Impressive.

Well, we should at least ease on the brake pedal.

One thing that we do need to realize while we’re kicked back watching low-stress college football this weekend, is that the best offenses still remain on Oklahoma State’s slate and that THE best it may face all year is coming up next weekend.

We’ll see how much of a shootout it turns out to be across the Red River, but to this point in the season Texas leads the Big 12 in scoring offense, total offense, third-down offense and is third in lost turnovers and turnover margin. (OU and Baylor are tied for first.)

And when it comes to that PPD stat I’ve been fawning over, the Longhorns rank third nationally scoring 3.89 points each time they get the ball. Only Alabama and Coastal Carolina rank higher.

One more thought on Texas.

When the Cowboys welcomed Texas last year they were also unbeaten (this time 4-0), and there was a lot of talk about how that OSU defense was only allowing 12 (!!) points per game. And then turnovers, poor field position and chunk plays saw the Longhorns hang 41 on them. That started of run in which OSU gave up 40-plus in three of four games and went 2-2. As Gundy is apt to say, We’ll know more about this team in October-November.

That’s not to say I won’t pick the Pokes to win. But as far as 2021 goes, UT is the most talented team that OSU will have faced so far. So as good as OSU’s defense has been, now would be a good time for its offense to start shouldering some of the load.