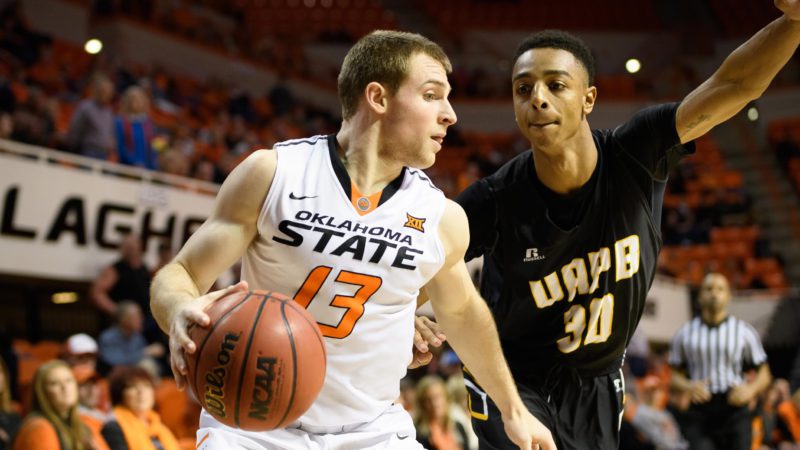 If you would have asked me this summer who Oklahoma State’s best 3-point shooter was, I would have answered you pretty quickly. Phil Forte brought in a 38.9 career 3-point shooting percentage (that’s top 15 in school history) and seemed poised to take down the “Pawnee Pistol” as reigning 3-point king.

But after turning in a 1 of 6 performance from deep against Wichita State on Saturday (and 3 of 11 from the field), the fifth-year senior finds himself in the worst shooting slump of his collegiate career.

Following the season opener against Campbell (in which he went 2 of 9 from three), Forte strung together three straight games of effective perimeter shooting (4-10 against Central Arkansas, 3-5 against New Orleans and 3-4 against UConn).

But since then, Forte has failed to reach 40 percent (from three) in any single game. During that seven-game stretch, he’s shot just 10 of 41 from beyond the arc for an abysmal 24.3 percent.

Forte’s true-shooting percentage (which takes into account field goals, 3-pointers and free throws) is a career-low 54.9. His lowest season-long TS percentage was 55.6 his freshman year.

In fact, if you include Tyler Underwood’s two makes on four attempts, Forte’s 31.9 percent is good for just ninth (!) on the team in 3-point percentage. He’s also taking way more shots from three than the rest of this teammates as he tries to shoot himself out of this slump. His 69 attempts represents 26 percent of the teams 263 total attempts.

Again, 2016-summer me would have thought these numbers would spell certain doom for Underwood’s inaugural campaign. But the Cowboys are 5-2 in that stretch with the only losses coming at Maryland and in a Maui-matchup with No. 7 UNC.

Despite Forte’s struggles, the Cowboys are shooting better from 3-point range (39.6 percent so far) then they have the last ten seasons. The best season a Travis Ford-coached team shot was his first year in 2008-09 when they made 38.4 percent of their three’s. If this keeps up, the Cowboys will have be the best 3-point shooting team the school has boasted since 2005 when they shot 41.6 percent from deep.

So why the sudden role reversal? For one, Underwood’s freshman class is full of guys with range. Here’s how they fare from beyond the arc.

Then you have Jawun Evans who’s just being awesome all around. He’s 15th in the country shooting 56.5 percent from three. Jeffrey Carroll is shooting 45.9 percent, as well. Both are shooting better from three than they did last season.

Underwood’s offense is made for someone like Forte. The ball movement. The transition opportunities that come from being third in the nation in forced turnover percentage (26.1).

So what’s the problem? Is it a confidence thing? I would assume so. At times his body language doesn’t look good. I wonder if it hasn’t gotten to him a little bit.

Forte or “Pastor Phil” is obviously a leader on this team and brings more than just his shooting acumen.

Do I think Forte will snap out of it? Yes. But with only one game remaining before the conference opener against West Virginia, let’s hope it happens soon.