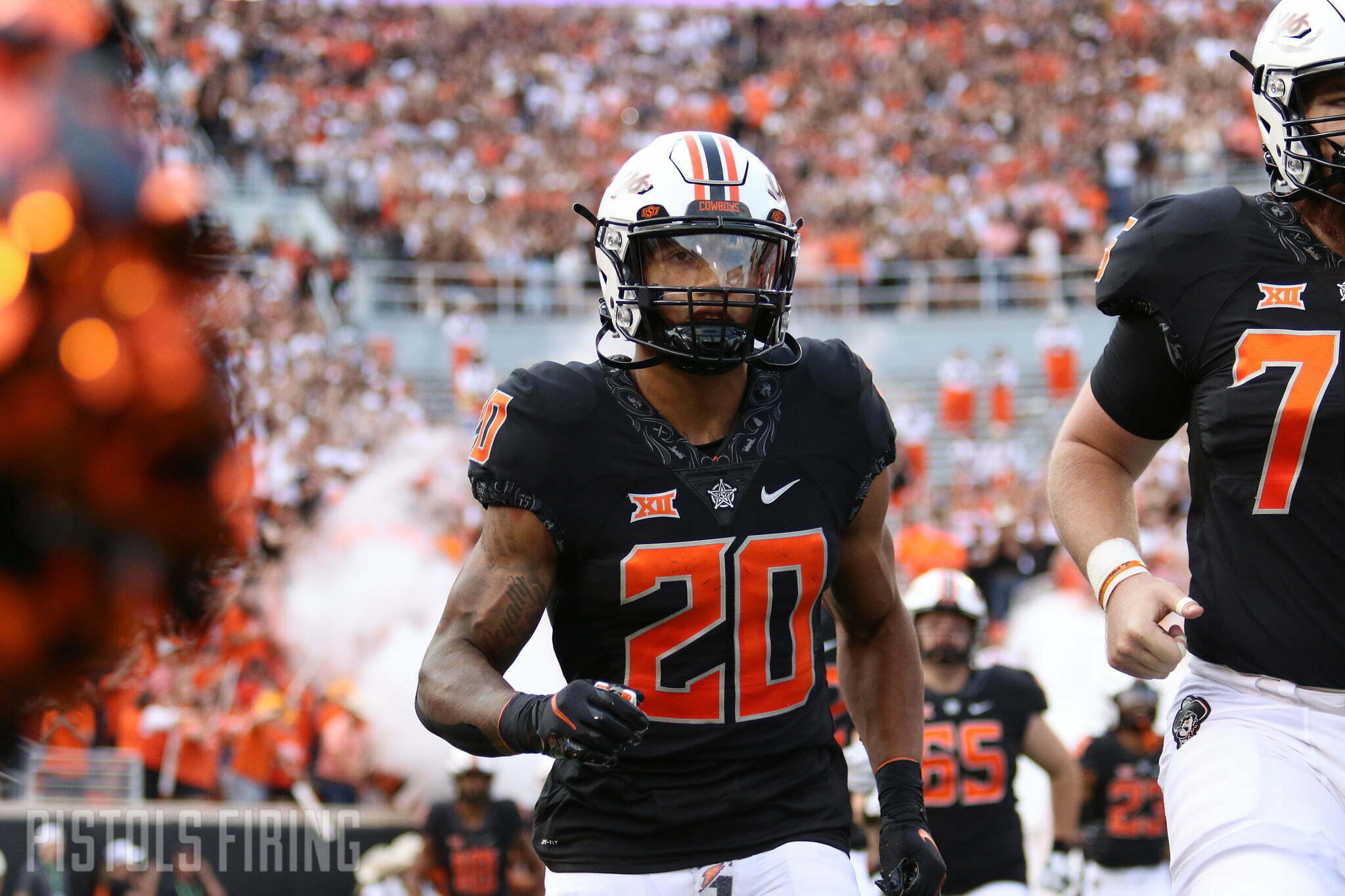 Bear with me on this one.

It was only Week 2, but Oklahoma State’s ability to get Dominic Richardson going against Arizona State was a good sign for the Cowboys’ season. A crucial indicator of potential success.

In their season opener against Central Michigan, the Cowboys went pass-heavy taking advantage of what the Chippewas gave them, but they struggled to move the ball consistently on the ground. That was a bit concerning for a team that lost half of its starters on defense and needs to be able to sustain drives. Alas, Spencer Sander went nuclear and the Cowboys survived, but a 3:1 pass-to-run yardage ratio was never going to be sustainable.

That’s why the step forward OSU’s ground game took against Arizona State — headlined by Richardson — was such a welcomed sight for Mike Gundy and his staff.

During his weekly media availability, Gundy credited his offensive line, Richardson and Co. for taking over the game in the second half against the Sun Devils, stating the Cowboys run-blocked better than they had in the first three halves of the season. Richardson did yeoman’s work, taking a career-high 27 handoffs up-field for 131 yards and a score of his own. Production like that needs to be a constant if the Cowboys are to reach their potential.

Coming into 2021, the Cowboys’ running back hierarchy was a mystery. OSU had three viable (or at least potential) starters in LD Brown, Dezmon Jackson and a pretty much unknown transfer named Jaylen Warren. That question mark loomed over OSU for the first two games of the season until Warren staked his flag into the royal blue turf in Boise, and the rest was history.

Heading into 2022, there was little doubt who would man the RB1 spot, but not because the Cowboys had an embarrassment of riches in terms of experienced RB depth. There was really only one option. And for OSU to reach its goals, he’ll need to stay healthy and have a similar breakout to his predecessor.

A Difference in Styles?

Warren turned the Cowboys’ season around with his ability to evade defenders and then make something out of nothing, and it looks like his former backup is on the same path. Richardson can do his own damage after defenders get involved.

According to Pro Football Focus, 105 of his 131 yards on Saturday came after contact. That’s insane. The highest yards-after-contact Warren ever recorded was 104 and that was in his huge game in Austin in which the now-Pittsburgh Steeler toted the rock 33 times for 193 yards. And that’s even more impressive when you consider the difference in running styles between Warren and Richardson.

Warren was the dynamic bowling ball with a killer jump-step and breakaway speed. Richardson is more of a big, punishing back who tries to run through linebackers. But he’s also more than just a one-cut wonder.

“So, he’s a big physical runner,” said Mike Gundy of Richardson on Monday. “He’s maturing some, we know that. He actually made some guys miss in some space which was encouraging. Arizona State had skill and so I was encouraged by that. I think he understands the type of runner he is, and we need to work around his skill set. And then we need him to improve a little bit and each one of those areas.”

If he keeps this up and stays healthy, Richardson is the type of player OSU can run its offense through, and he’s expanding his game to be an all-around playmaker that can beat teams in multiple ways. Against ASU, he hauled in five catches on six targets for 44 receiving yards, all career-highs. As Sander’s safety blanket, he turned in a team-high 82.8 receiving grade per PFF, the best of any Cowboy so far this year.

There are other options in the Cowboys’ backfield. Jaden Nixon is a dynamic, speedy back who’s shown flashes of his highlight-reel potential. Rookie Ollie Gordon is averaging a video game spin move on one out of every four touches. And at some point, Texas A&M transfer Deondre Jackson will become eligible. All could be future stars in Stillwater, but it’s unlikely that any is ready to shoulder an offense. The Cowboys need a healthy Richardson for the next three-plus months.

With the turnover on defense and the dearth of experience behind him, a consistent three-down runner with the ability to make plays is vital for OSU. There’s a case to be made that, other than Spencer Sanders, no single player is more impactful to OSU’s success than No. 20.

With Warren sidelined in Arlington last December, OSU came within inches of winning a Big 12 title and quite possibly making it into the Final Four. Whether or not this Cowboys squad has that type of potential remains to be seen, but without Dominic Richardson, they likely won’t even get close to finding out.