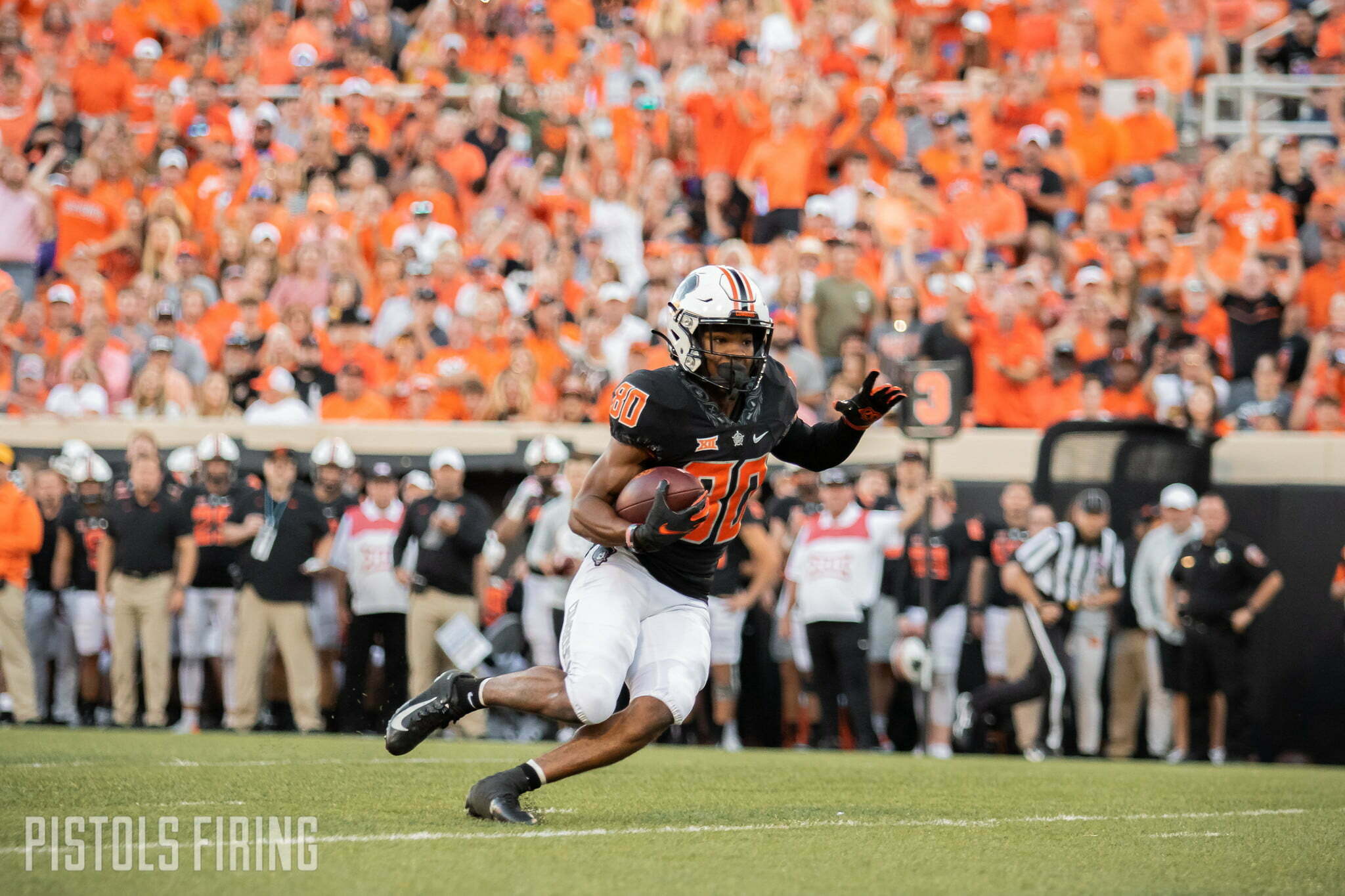 The Cowboys will have not one, but two dynamic Presleys on their roster this fall. At some point in the near future, they could both line up to receive kicks at the same time. Good luck kicking away from the home run threat.

Brennan Presley and his younger brother Braylin Presley have some obvious similarities. Both were touted speedsters who did it all for Bixby High School. Both were named Oklahoma Gatorade Player of the State their senior seasons. And both stood just a couple of inches shy of the recruiting radar for many schools.

Entering his junior season at Oklahoma State, Brennan stands at 5-foot-8 and 175 pounds. Entering his freshman year, Braylin comes in at 5-8 and 165. It’s no doubt that the those numbers (at least somewhat) overshadowed the impressive video game numbers the two Presley brothers racked up, each in his own impressive prep career.

But both will get a chance to prove all doubters and tape measures wrong. Brennan’s already well on his way.

The Cowboys’ slot receiver earned All-Big 12 Second Team honors as a returner last season. He returned 16 punts and ran back 12 kickoffs, including an electrifying touchdown that will go down in Bedlam lore.

Brennan should again be one of the top targets for Spencer Sanders. Braylin just capped a career at Bixby in which he amassed 7,500 all-purpose yards and was responsible for 102 total touchdowns.

Mike Gundy, who’s never been one to undervalue a player based solely on his measurables, was the first to tease the possibility of both Presleys, at some point, sharing return duties.

“We’ve been fortunate at Oklahoma State for years to be able to find skill players that can make a play with the ball in their hands,” said Gundy at Big 12 Media Days. “You mentioned Presley; he’s been fantastic for us, made big plays for us. His younger brother, Braylin, is coming in. Hopefully at some point in their careers the two guys returning the kickoff will both be Presleys. We’ll see how all that falls.”

Brennan was asked about the possibility of lining up opposite his brother on special teams plays, just like they did once upon a time at Bixby. He said he’d been thinking about that possibility himself. “So if it happens, don’t be surprised.”

Brennan met with media in Arlington while wearing jeans and cowboy boots that he had to borrow from the incoming rookie. Braylin, according to Brennan, has been know to frequent “rodeos and stuff like that,” while Brennan claims that he didn’t own a pair of jeans until a teammate gifted him some last season.

Despite any perceived similarities on the field, Brennan says that he and Braylin are definitely their own people off the field — and that goes beyond wardrobe differences.

“When we’re at home together, like at the house, we don’t necessarily talk,” said Presley. “We’re not gonna be lovey-dovey around each other. But if we ever need something, I’m always there. He’s always there. And the dynamic now is like, we’re in college. I don’t have to necessarily do everything with him or for him.

“I feel like some people think that is the thing. Like, ‘Oh, your brother’s here. Are you guys gonna eat together?’ He’s in college too. He’s an individual. Let him live his life. But also, like, I’ll try to give him any tips that I can offer so that he doesn’t necessarily have to go through the same things that I had to go through. Just offering that, but let him — honestly, you have to mess up sometimes in life in order to learn. So knowing when to let him fail and learn, and when to offer some presence.”

Brennan was asked if he and Braylin would at least be roommates. His answer? “Nah.” He says they’ve spent enough time living together.

But while the two Presleys have their own personalities and circles of friends, when it comes to offering support or guidance — both on and off the field — Brennan has been there for his younger brother in the past and he says will be in the future.

“I’m not gonna lie, he’s a dog when it turns to special teams,” said Brennan. “As far as punt return, that is the scariest thing, one of the scariest things I do in a game. You’re back there by yourself. You’ve got 80,000 people watching you. If you drop a punt, you can’t look at anybody else. But also, I think people take for granted when you catch one, they just assume it’s easy to do.

“His mindset — we were in high school once and we were in dual return. He dropped one and he walked off the field and I tried to keep his head up. And then they punted again, like four plays later. He ran back to the same exact spot and caught it. Just the way he’s mentally wired, I think he’s set up great for that.”

Brennan’s advice for his younger brother? Learn the playbook and continue to sharpen that mindset that impressed him a few years ago, the last time they were teammates. With OSU’s touted strength program, the physical side will take care of itself.

“Not only do I know the plays, but can I accelerate the learning curve of learning coverages and the differentiation of all that stuff,” said Brennan. “I just told him learning that stuff will keep you on the field longer than being 6-7 or whatever physically. The mental aspect.”